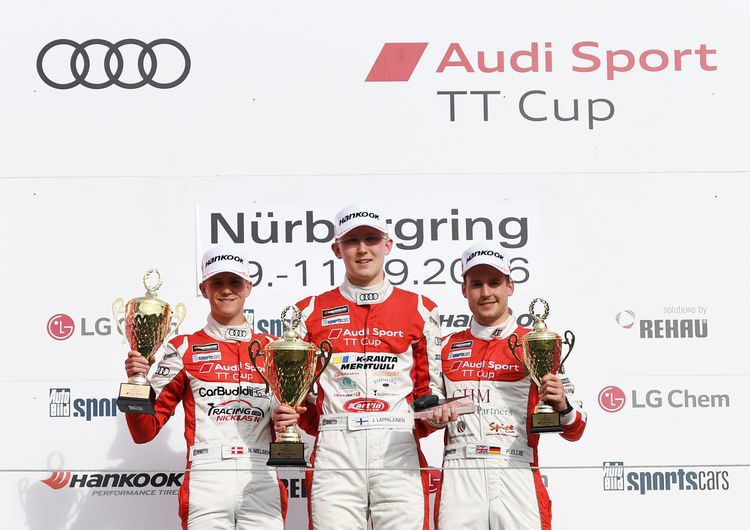 Joonas Lappalainen is the man of the weekend in the Audi Sport TT Cup. At the Nürburgring, the Finn celebrated his second and third victories this season. Thanks to scoring the maximum number of points, the driver who finished last year in fourth place overall took the top spot in the standings. Contenders in the guest entrants’ classification included German TV star Tayfun Baydar and freestyle skier Benedikt Mayr, among others.

The drivers from the Audi Sport TT Cup delivered perfect motorsport entertainment to the spectators in the Eifel. The turbulent first round was won by Lappalainen in impressive style. Following two collisions in which he was not at fault, the Finn had initially dropped to position ten, but made an effective comeback, crossing the finish line in first place. Lappalainen’s compatriot Emil Lindholm and Gosia Rdest completed the podium in positions two and three. For the Pole, this marked her first ever podium finish in the Audi one-make cup. “The spectators really got their money’s worth,” said Project Leader Philipp Mondelaers. “Never before has the Audi Sport TT Cup seen so many action-packed overtaking maneuvers.”

In race two on Sunday, events came thick and fast right after the start. Overall leader Dennis Marschall lost control of his car, causing a chain reaction that resulted in the race being stopped. Victims of the incident included runner-up Sheldon van der Linde. While the South African was forced to retire from the round, Marschall was able to resume the race after the restart. However, the 20-year-old German had no chance against the dominant Lappalainen. With his damaged car, Marschall dropped to position 13. Front runner Lappalainen pulled clear of the field and went on to win the race ahead of Nicklas Nielsen from Denmark and Englishman Philip Ellis.

The grid of the guest entrants’ classification at the Nürburgring included two high-caliber drivers. Actor Tayfun Baydar, known from the RTL TV series “Gute Zeiten, schlechte Zeiten” (“Good Times, Bad Times”), and freestyle skier Benedikt Mayr fascinated the fans both on and off the track. Mayr kept the upper hand in the first duel, finishing the race in third place, trailing New Zealand racer Simon Evans and Finnish journalist Robert Koistinen. In round two, Baydar reversed the score, celebrating his podium finish like a victory. “It was great that we again had the opportunity to welcome two prominent drivers like these as guests in the Audi Sport TT Cup,” said Chris Reinke, Head of Audi Sport customer racing. “The guest drivers’ classification is an attractive and thrilling complement to our one-make cup not only for the fans.”

In the overall standings of the Audi Sport TT Cup, Joonas Lappalainen took the top spot following his perfect weekend. The Finn’s tally now reflects 197 points – 17 more than that of runner-up Dennis Marschall. Nicklas Nielsen advanced to third place with 166 points. In just two weeks’ time, the sixth in a total of seven race weekends in the Audi one-make cup is coming up. At the Hungaroring in Budapest, from September 23 to 25, the Audi one-make cup will again be held as part of the DTM.