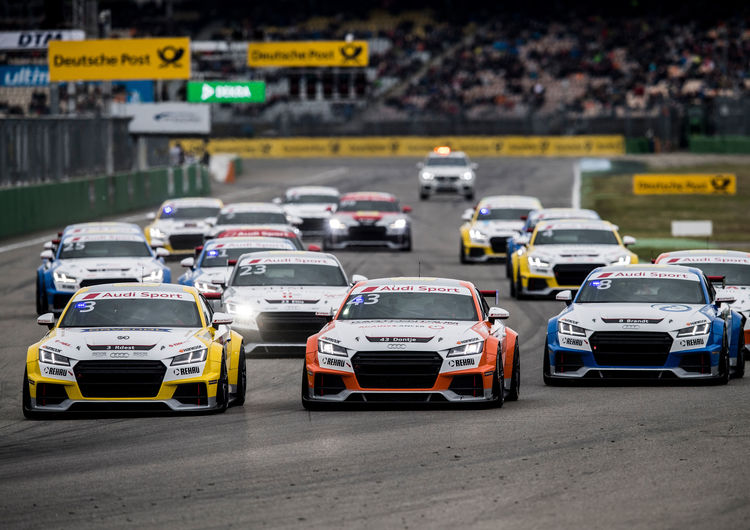 Ex-Motorcyle World Champion with Audi: Johnny Cecotto competes in the Audi Sport TT Cup at the Nürburgring. The Venezuelan has many fans in Germany: after his career as the two-time Motorcycle World Champion, he switched to Formula 1. He celebrated his first great touring car success in Germany with the title in the STW Supr Touring Car Championship, the ADAC GT Cup, in the Nürburgring 24 Hours and in the V8STAR. Just like the journalist Sönke Brederlow, the former DTM driver Cecotto is a guest starter in the Eifel. The 16 permanently registered juniors are also looking forward to two exciting races in the supporting program of the Nürburgring 24 Hours. At the opener in Hockenheim, Briton Philip Ellis won two spectacular races before the Pole Gosia Rdest. The Dutchman Milan Dontje and Yannik Brandt from Switzerland took pole positions in Hockenheim. Brandt completed the podium in the first race, whilst Scottish rookie Finlay Hutchison, who delivered an impressive fightback from twelfth to third in the second race, will again have the podium in his sights in the Eifel.

Victory in New Zealand: Simon Evans and Gene Rollinson began the North Island Endurance Series in New Zealand with a victory. On the Taupo race track at the foot of a volcano, they won the three-hour race in the Audi R8 LMS from Smeg Racing, having started from pole position. Neil Foster and Jonny Reid were third in another Audi R8 LMS for the International Motorsport team.

Success in Austria: The privateer Ronny C’Rock took a victory at the Red Bull Ring on the third race weekend of the DMV GTC racing series. After a lap-long duel, the German driver prevailed in the first race in the Audi R8 LMS from Land-Motorsport. In the second race, Tommy Tulpe from Team HCB-Rutronik Racing finished second in an Audi R8 LMS in front of teammate Egon Allgäuer.

Four podiums in Thailand: At the second event of the Blancpain GT Series Asia at the Chang International Circuit, the Audi drivers successfully continued their season. Marchy Lee/Shaun Thong finished second in the Audi R8 LMS from Audi Hong Kong in both individual rounds. The two drivers thus advanced to the second on table of the overall rankings and now lead the silver rankings. Alex Yoong/Alex Au completed the podium in another Audi R8 LMS in third in the first race, and Mitch Gilbert/Aditya Patel finished third in the second race.

Second place at Lausitz: Christopher Mies/Connor De Phillippi delivered an impressive fight-back in the second race weekend of the ADAC GT Masters. The title defenders from Montaplast by Land-Motorsport started from fifth in the second race at the Lausitzring. At the end, the duo in the Audi R8 LMS missed out on victory by only 1.458 seconds.

Trophy in the Alps: Richard Chlad Jr. stood on the podium twice in the FIA CEZ Eset V4 Cup. The Czech drove to third place in both rounds at the Red Bull Ring in an Audi R8 LMS from K&K Racing Team.

Two victories in the dunes: Jaap van Lagen succeeded with Audi in a perfect home race in the TCR Benelux. The Dutchman celebrated two race victories in Zandvoort with Certainty Racing Team in the Audi RS 3 LMS. His compatriot Mika Morien drove to another podium with Bas Koeten Racing in an Audi RS 3 LMS in the third of four sprints.

Champagne in Canada: Three weeks after the debut of the Audi RS 3 LMS in North America, Team C360R took its second victory at the second event of the Pirelli World Challenge. In the first of two races of the TC class, Paul Holton, the winner of the opening round, prevailed again. Jason Coupal from Berg Racing clinched another trophy with a second-place finish in the second race.