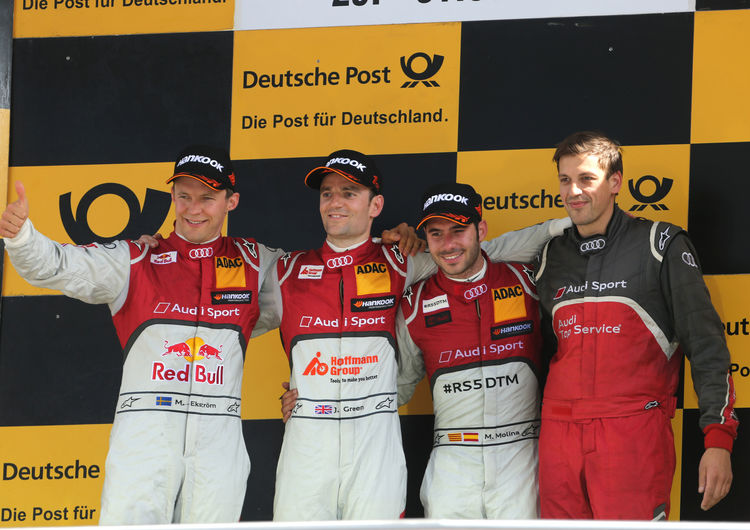 Seldom has a brand been as dominant on a DTM weekend as this time: 60,000 spectators witnessed an impressive showing by the Audi RS 5 DTM at the Lausitzring. The one-two-three-four win on Saturday evening was followed by an even greater Audi triumph in positions one to five on Sunday afternoon.

The Audi show at the Lausitzring was led by Jamie Green. The Briton from Audi Sport Team Rosberg in the Hoffmann Group Audi RS 5 DTM repeated his commanding success from the day before, which makes him the first double winner in the 2015 season. In the early stage, Green prevailed in a direct duel with his brand colleague Mattias Ekström in the Red Bull Audi RS 5 DTM of Audi Sport Team Abt Sportsline. After having dropped from first to second place at the start, he managed the decisive overtaking maneuver on lap eight. Afterwards, he was able to achieve a small advantage and immediately pulled clear again following a caution period shortly before the end of the race.

“The race today was harder than yesterday,” Green said after scoring his third victory of the season. “Mattias (Ekström) was fast and my advantage was never really large. Obviously, having won both races here is mega.” Mattias Ekström clinched a similarly uncontested second place and is now trailing Jamie Green in second place of the overall standings.

Miguel Molina in the Teufel Audi RS 5 DTM in third place notched up his first podium result of the season. On Sunday, the Spaniard fought a duel with Timo Scheider in the AUTO TEST Audi RS 5 DTM of Audi Sport Team Phoenix nearly throughout the entire race, which Molina decided in his favor by a narrow margin.

Edoardo Mortara in the Castrol EDGE Audi RS 5 DTM in fifth place scored points again in the year’s fourth race, which puts him in third place of the standings with an equal points score as Mattias Ekström. Following the caution period, the Italian successfully defended himself against an attack by Mercedes driver Daniel Juncadella on the final lap.

Nico Müller (Audi Financial Services Audi RS 5 DTM) and Mike Rockenfeller (Schaeffler Audi RS 5 DTM) in positions nine and ten caused seven of the eight Audi drivers to finish in the points. Only Adrien Tambay went home empty-handed. The Frenchman had battled his way forward from position 20 on the grid before being turned around by Bruno Spengler and forced to retire shortly before the end of the race. The BMW driver received a 30-second post-race penalty for the incident.

“Yesterday I said that one-two-three-four wins are very rare in the DTM,” Dieter Gass, Head of DTM at Audi Sport commented. “That we even had five of our cars finish at the front today crowned a perfect DTM weekend for Audi. We’re delighted but we also know how quickly the tables can turn again in the DTM. Our home round at the Norisring in four weeks from now will literally be a heavy challenge, as we’ll have to add even more weight to our cars. But that we’ve been able to deliver such a performance at the Lausitzring of all places shows how strong the Audi RS 5 DTM is this year.”

With the double success at the Lausitzring, Audi extended its lead in the DTM manufacturers’ standings as well. Audi Sport Teams Rosberg and Abt Sportsline are ranked at the top of the standings with an equal points score.