Recycling is premium. In a 1-year pilot project we are investigating whether car glass that comes from our customers’ car windows, can be recycled in such a way that it can be used as a valuable material for the series production of new vehicles. Watch the video to see exactly how the process for this pilot program is done. Using damaged glass, we are turning it into new windowpanes. But how exactly does it work? The pilot project uses an innovative recycling process in which older car windows are broken into small pieces and then – freed from non-glass impurities such as adhesive residues – are melted down to make new glass sheets which then will be used for new car windows. For this premium recycling project, we partnered with Reiling Glas Recycling (@Reiling Unternehmensgruppe), Saint-Gobain Glass (@SaintGobainTV) and Saint-Gobain Sekurit (@Saint Gobain Sekurit TV). If the pioneering work succeeds, the plate glass will return as a news car window in the Audi Q4 e-tron series. More information: https://www.audi.com/en/company/sustainability/core-topics/value-creation-and-production/closed-circuit-recycled-automobile-glass.html
YouTube 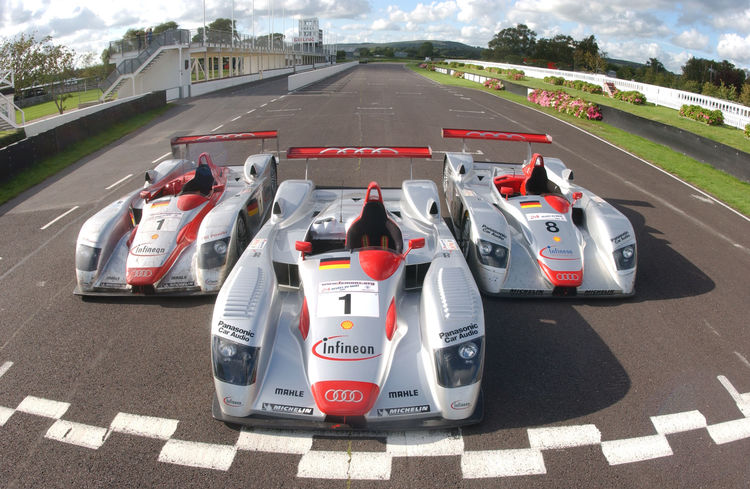 In winning the Le Mans 24 Hour race three times consecutively, AUDI AG has once more shown that the corporate slogan “Vorsprung durch Technik“ has to be taken literally. Rarely before has a manufacturer been as successful as Audi in what is regarded as the world’s toughest motor race. In particular, the Audi sports racing car’s strength was its 100% reliability: since its début back in 1999, all the cars entered by Audi Sport Team Joest crossed the finishing line at Le Mans. Three times in succession, Audi left the entire opposition trailing behind – a unique result.

The Audi team proved through the 2001 season that the previous year’s feat had not been achieved by coincidence: in extremely difficult conditions, partly characterised by torrential rainfall, Audi celebrated a convincing 1-2 victory. FSI technology, which had been used for the first time, played a crucial role. The improved throttle response thanks to the direct fuel injection gave the Audi drivers a considerable advantage on a wet track.

On the way to the triple victory in 2002, the lower fuel consumption of the FSI technology, developed by Audi, fully came into effect. The 610 hp Infineon Audi R8 sports cars were not only the fastest cars in the field. Thanks to their FSI engines, they saved precious time as their pit-stop frequency for refuelling was lower.

With their hat-trick, AUDI AG did not only write a new chapter in their corporate motor racing history, but enriched the Le Mans history by a successful chapter, too. Audi is the first manufacturer to keep a Le Mans trophy for good. In the early 1990s, Automobile Club de l´Ouest (ACO), the organiser of the Le Mans 24 Hour race, created a trophy that was handed to the respective Le Mans winner for one year and had to be returned to the ACO prior to the start of the following Le Mans race. At the same time, the organisers decided that a manufacturer could keep the trophy for good if it won the Le Mans 24 Hour race with the same team three times in succession.

Audi Sport Team Joest achieved this hat-trick with its wins in 2000, 2001 and 2002. Dr Martin Winterkorn, Chairman of the Board at AUDI AG, received the trophy from Michel Cosson, President of the ACO at the end of September. It can now be admired in the Audi museum mobile in Ingolstadt.

Audi works drivers Frank Biela, Tom Kristensen and Emanuele Pirro achieved a unique feat at Le Mans: they became the first driver combination ever to win the endurance classic that has been run since 1923 three times in a row.