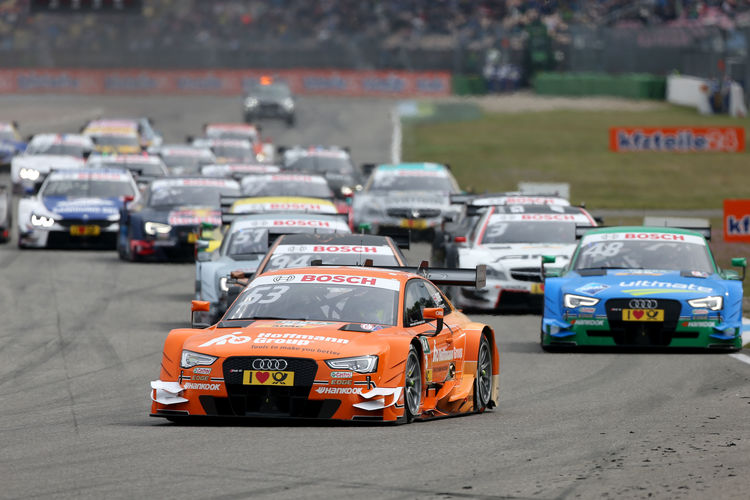 The Red Bull Ring at Spielberg, Austria, will be the venue of the next two DTM races during the first weekend in August. Audi is traveling to Styria with a one-two lead in the drivers’ standings and as the leading manufacturer.

The ninth race of the season on Saturday will mark the end of the first half of the 2015 DTM in which Audi has been the strongest brand so far. Four victories have been scored by the Audi RS 5 DTM, as well as four pole positions and four fastest race laps. Plus, the lead of the manufacturers’ championship with a 48-point advantage and positions one, two and four in the drivers’ championship with Jamie Green (Hoffmann Group Audi RS 5 DTM/81 points), Mattias Ekström (Red Bull Audi RS 5 DTM/76 points) and Edoardo Mortara (Castrol EDGE Audi RS 5 DTM/58 points).

“At Hockenheim and at the Lausitzring, with four victories in succession, we made a perfect start to the season,” says Dieter Gass, Head of DTM at Audi Sport. “We got our comeuppance for it in the form of performance weight that, literally speaking, was a heavy burden that made life hard for us at the Norisring and at Zandvoort. Our aim for Spielberg is to return to the podium.”

Due to the extremely competitive DTM field the ‘success-induced’ performance weight has a major influence on the results – especially in qualifying. Last year, the top six on the grid at Spielberg were separated by only 0.091 seconds. “This time, the weight differences will be a little smaller than most recently at Zandvoort, but the BMW race cars, on average, are still about ten kilograms lighter than our cars,” says Dieter Gass. “According to our projections, this will amount to nearly two tenths of a second per lap,” Dieter Gass adds.

The heaviest car in the field is the one of Mattias Ekström who, with fourth place at the Norisring and seventh place at Zandvoort, managed to approach Jamie Green with a five-point margin. “For our partner Red Bull it would obviously be great if I could take the lead at the Red Bull Ring of all places,” says the Swede who still has some unfinished business at Spielberg. It is the only current DTM track that has not yet seen him mount the podium. “So it’s high time, especially because the Red Bull Ring is a home round for me. I live in Austria now and, aside from the races, have visited many other events at the Red Bull Ring.”

Jamie Green is traveling to Spielberg with unfinished business as well. Last year, he was battling in the group of the front runners but then received a drive-through penalty for pitting one lap too late. “That was obviously frustrating,” Green recalls. “But it showed me that we can be fast at the Red Bull Ring. However, I’ve stopped making predictions – that’s just not possible in the DTM.”

Edoardo Mortara is the only one of the current eight Audi drivers to have finished on podium at Spielberg – on the top step. In 2012, the Italian celebrated his first DTM victory at the Red Bull Ring. Trailing the leader of the standings with a 23-point deficit, he continues to expect having chances of winning the title. “One victory and I’m back in contention,” says Mortara.

The 4.326-kilometer Red Bull Ring is regarded as one of the most challenging and varied DTM race tracks. The fastest turn is driven at 230 km/h, the slowest one at 60 km/h. Plus there are uphill and downhill sections with a maximum upward gradient of 12 percent and a maximum downward gradient of 9.3 percent. The DTM track record in the race is held by Audi driver Mike Rockenfeller in the Schaeffler Audi RS 5 DTM with a lap time of 1m 25.266s.

As part of the supporting program, the Audi Sport TT Cup will be holding two further rounds with ski stars Felix Neureuther, Marcel Hirscher and Aksel Lund Svindal as prominent guest entrants. Former DTM driver Rahel Frey will be running as a guest as well. Tickets for the Spielberg weekend are available at www.audi-motorsport.com.