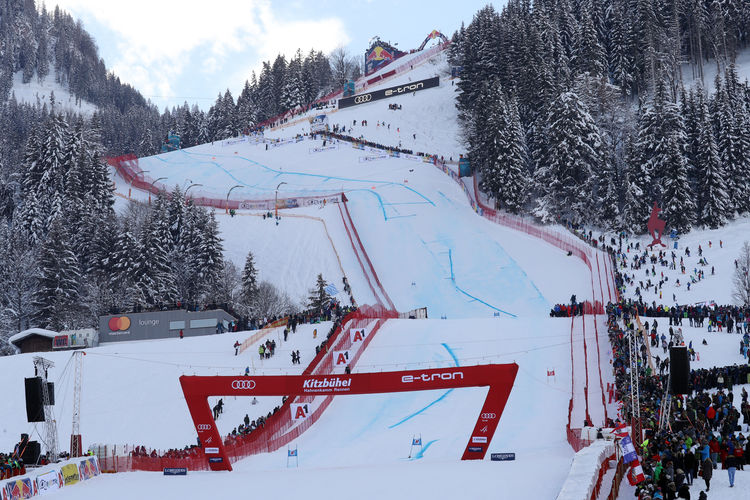 For the 18th time, Audi is the title sponsor of the Audi FIS Ski World Cup, whose pinnacle event of the season is coming up in Kitzbühel this weekend. As a partner, the brand has billed the famous Hahnenkamm race featuring numerous activities centered on the topic of electric mobility as “Kitz Electrified.”

“HKR” is celebrating a special anniversary: Next weekend (January 24 to 26), the Hahnenkamm Race will be held for the 80th time. Year after year, some 100,000 spectators flock to Kitzbühel to watch the men’s competitions in Super G, slalom and of course on the awe-inspiring “Streif” downhill course. Audi has now been supporting the season’s pinnacle event in Austria as well as the entire Audi FIS Ski World Cup as a partner and its title sponsor for nearly two decades.

This year, the Audi e-tron, the brand’s first fully electric model, will once again be playing a starring role at the event: 50 of the 85 cars of the shuttle fleet are electrified and the e-tron, in addition to other models, will also be deployed at the Audi driving experience in nearby Kirchberg. For this purpose, the complex, which is home to an off-road park and a slalom course, will be equipped with a mobile charging station for the first time.

For those seeking a personal experience of the legendary Mouse-Trap with its 85-percent gradient without putting on skies themselves, Audi Austria has designed an app that will initially take them up the Streif in an Audi e-tron and subsequently back downhill from the start house toward the Mouse-Trap on skies. Skiing legend Hans Knauß and presenter Stefan Steinacher will serve as commentators of the performance. The app App is called “#unraceable Ski Challenge” and available free of charge for iOS and Android at the respective online stores.

Audi has been supporting the alpine athletes as the World Cup’s title sponsor for nearly two decades and has been the principal sponsor of the German Ski Association (DSV) including all national teams for 35 years. The brand also has commitments with many other alpine national teams and appears as a partner at selected events. Some teams regularly train at the Audi wind tunnel center in Ingolstadt or participate in Audi driving experience events at the Audi driving experience center in Neuburg an der Donau.