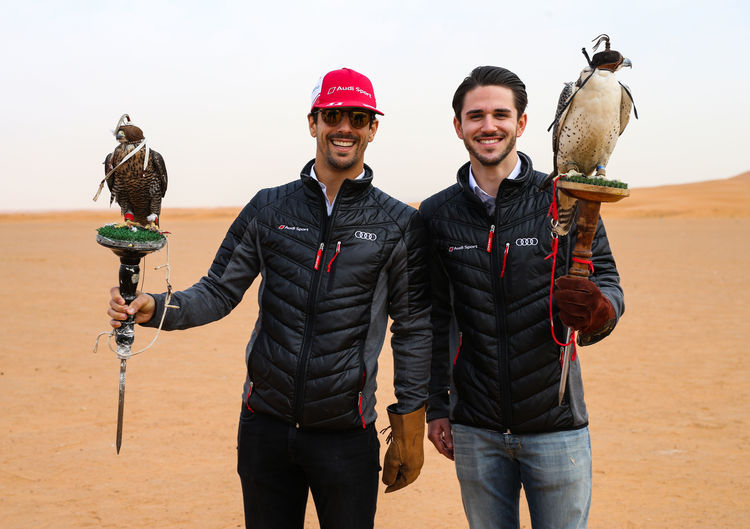 On Saturday, the new Formula E season starts in Ad Diriyah. The race track in reality is even more challenging than in the simulator and on an excursion to the desert the two drivers from the Audi Sport ABT Schaeffler team had an unusual experience as well.

On Thursday morning, Daniel Abt and Lucas di Grassi in an Audi Q8 drove to the desert on the outskirts of Riyadh, where with guidance from a local falconer, they pitted two falcons against each other in a race. The duel went to Lucas di Grassi’s bird. Abt and di Grassi were curiously watched by a herd of camels that happened to pass by.

Following the “track walk” on the 2.494-kilometer race track, Daniel Abt and Lucas di Grassi unanimously said: “A fantastic circuit – and arguably one of the most difficult tracks Formula E has ever raced on. The circuit is really fast with fluid S-turns and major elevation changes. The race will be a great challenge.”

Getting special attention during the track walk was the section in which the drivers are allowed to activate the so-called “attack mode” in the race for a short-term power boost. “We are all very excited to see how that will work,” said Team Principal Allan McNish at the press conference on Friday. “After the two free practice sessions, we’ll know more.” Attack mode is one of the many innovations for the 2018/2019 season. The previous mid-race car swap has been omitted as well. The second-generation Formula E cars allow the entire race distance of 45 minutes plus one lap to be covered. In addition, five instead of the previous three drivers are now receiving a power boost by #Fanboost voting.

The E-Prix in Ad Diriyah is the first joint race for Daniel Abt and Christophe de Coninck. The 2.02-meter tall Frenchman with many years of Formula E experience is the German’s new race engineer and has been part of the team since August.

An extremely challenging task awaits Daniel Abt and Lucas di Grassi in qualifying. According to the regulations of the fully electric racing series, in race one, the five drivers with the best points score from the previous season have to compete in the first qualifying group when the track typically has the least grip. From race two onwards, the two groups will again be determined by the drawing of lots.

Starting this weekend, the two German public TV channels, ARD and ZDF, will intensify their Formula E coverage. The E-Prix in Ad Diriyah (start on Saturday at 3 PM local time/ 1 PM CET) can be watched on a livestream at www.zdf.de. The race in Rome (April 13) will be broadcast live on ZDF, the races in Monaco (May 11) and Berlin (May 25) live on ARD. As previously, Eurosport will be covering all of the races on free-to-air TV in Germany again.

Daniel Abt and Lucas di Grassi received an enthusiastic welcome by some 100 employees of the DHL Logistics Center at the Riyadh international airport. The two Audi drivers avidly signed autographs, patiently answered the questions of the employees and posed for numerous selfies. DHL is a long-standing partner of the team and of Formula E.

Jerez, Madrid, Jeddah, Riyadh: Test and development driver Nico Müller traveled from DTM tests in Spain to Saudi Arabia. “I left at 10 in the morning and arrived in the hotel at 3 at night,” said the Swiss who will sit in the cockpit of an Audi e-tron FE05 for the Audi Sport ABT Schaeffler team during the official test day in Ad Diriyah on Sunday.

On Friday night, Daniel Abt, Lucas di Grassi, Nico Müller and Head of Audi Motorsport Dieter Gass were guests at the official opening of a new Audi Show Room in Riyadh to which some 200 guests and Audi customers were invited.