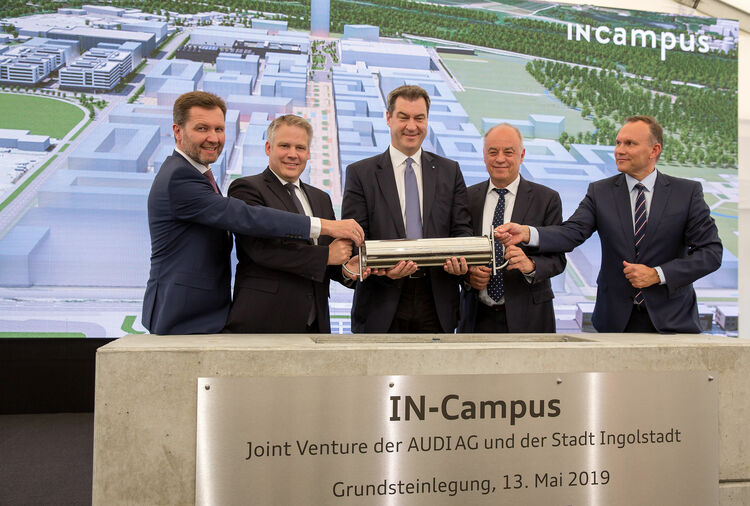 “IN” stands for innovation: With IN-Campus, AUDI AG and the city of Ingolstadt have gotten a strategic investment off the ground. They will work together to intricately remediate the site of a former oil refinery in Ingolstadt, the first environmental project of its kind in Bavaria. IN-Campus GmbH, a joint venture of AUDI AG and the city of Ingolstadt, is investing in a campus—the focus lies on the technologies of the future. Construction work on the 75-hectare IN-Campus, which was designed to be open and close to nature, is already underway. Today, May 13, the Bavarian Minister President, Dr. Markus Söder, the Mayor of the city of Ingolstadt, Dr. Christian Lösel, and Audi Board of Management Member for Production Peter Kössler, together with the two managing directors of IN-Campus GmbH, are officially laying the foundation stone for the joint project.

The Bavarian Minister President Dr. Markus Söder emphasizes: “Here in Ingolstadt we can see that protecting nature and using cutting-edge technology go hand-in-hand in Bavaria. The IN-Campus will transform an old refinery into an innovation center of the automobile industry on remediated Bavarian soil. The dedication of AUDI AG and the city of Ingolstadt will protect nature and the landscape while also creating many new jobs. This represents a clear commitment to the Ingolstadt site. Future-oriented projects such as these are characteristic of Bavaria and its companies.”

The statement from Dr. Christian Lösel, the Mayor of the city of Ingolstadt, focused on the following: “IN-Campus is the emblem of technological change in our city: What was once a refinery is now becoming an innovation campus. But we are doing more than just constructing new buildings here. We are creating the jobs of the future here, for the technologies of the future! This exemplary innovation campus is a sign of Audi’s generous commitment to the Ingolstadt site. Today’s foundation stone is therefore an important symbol on two fronts: the starting shot for the IN-Campus as well as the foundation stone for the continued positive development of Ingolstadt.”

“With the IN-Campus, we are implementing an environmentally friendly remediation project that is without equal in Bavaria. We are completely remediating a former oil refinery site instead of using unbuilt areas, as was the case in the past,” says Peter Kössler, Audi Board of Management Member for Production and Logistics. “At the same time, we are creating the future, because this is where Ingolstadt’s new thought factory, populated with clever people from Audi, scientists, start-ups and partner companies, will arise. It makes me proud to lay the foundation stone for this today.”

Construction work on the former refinery site in the east of Ingolstadt has already started—in keeping with the progress of soil decontamination. The buildings from construction section 1 (three construction sections are planned in total) are set to be completed in 2023. The IN-Campus does not require any undeveloped land to be covered up—on the contrary, the project will breathe new life into a contaminated industrial wasteland. The project house is already under construction. It takes the form of a large complex made up of four buildings with 42,000 m2 (452,084.2 sq ft) of office and workshop space. From late 2020, around 1,400 developers from Audi and partner companies will work on innovative technology projects in this idea factory. While the project house is being constructed, comprehensive infrastructure work for construction section 1 is also underway.

A major strength of the IN-Campus is the large, continuous area of 75 hectares, the likes of which cannot be found anywhere else in Ingolstadt or the region. It offers an opportunity to create a spacious, flexible and attractive technology park in which high tech and creativity co-exist. 60 hectares will be used as a commercial and industrial park in the future, while the remaining 15 hectares will be restored to nature and landscape. One further advantage is the geographical location: The site is located close to Audi’s main plant and directly on the A9 highway, which is used as a digital test area for the development of automated driving. The Ingolstadt-Süd highway access road will get a direct connection to the IN-Campus.

Free access, open structures and spacious outdoor facilities will be the hallmarks of the campus character of the site. The buffer area is a green corridor in the east, which creates a near-natural transition to the riverside woodland. The riverside woodland and the Danube run adjacent to the north of the site. The IN-Campus connects the urban world with the quietness of the Danube wetlands; it creates an interface between high tech and nature. From north to south, a wide parkway with generous green areas will run across the site in the future. This “campus vein” is a central element in the building concept.

In addition to the project house and the wide-ranging infrastructure measures, additional buildings will round off construction section 1: a vehicle safety center with an ultra-modern crash arena, an IT center, a functional building together with a fire station and an energy control center. The latter acts as a control center of an innovative energy-based concept for the IN-Campus. The buildings in construction section 1 are planned to have been completed by 2023; IN-Campus GmbH will gradually develop additional future-oriented projects on the remainder of the site.

The IN-Campus is being built on a former refinery site in Ingolstadt, which was in operation for 43 years. IN-Campus GmbH acquired the majority of the site in 2015. The necessary cleaning of the soil and groundwater started in fall 2016—carried out by a working group made up of three specialist companies that uses ultra-modern methods. Most of the remediation work is set to have been completed by late 2022. Groundwater remediation is likely to continue until 2028.

This elaborate remediation project on the IN-Campus site is one of the biggest in Germany and unprecedented as an environmental project in Bavaria. The remediation incorporates four particular methods: groundwater treatment, air sparging, honeycomb excavation and downstream soil washing.

Groundwater treatment involves ten wells at the edge of the site that are equipped with electric pumps to draw polluted groundwater out of the soil. A treatment system removes over 99.9% of pollutants.

The air sparging method is designed to combat volatile hydrocarbons, which are components of gasoline fuels. Air is blown into the ground through hundreds of pipelines and picks up dissolved pollutants in the soil and groundwater. Just beneath the surface of the site, the air is extracted through drainage pipes and cleaned.

The polluted soil is excavated so that the PFC residue from firefighting foams and total petroleum hydrocarbons—left by the fuel oil—can be eliminated. This takes place by means of an innovative and high-precision technique in which hydraulic rams drive steel hexagons into the earth using vibration. In total, they are excavating 600,000 metric tons of material from the soil, mostly involving the sand and gravel typical of the site.

A soil washing facility uses water to clean pollutants from the soil grains. The water circulates via a treatment system, while another system cleans the resultant exhaust air. More than 90% of the material delivered to the facility is returned to the hexagonal “honeycomb” holes; the rest is disposed of.

Additional statements on the IN-Campus

Peter Mosch, Chairman of the General Works Council of AUDI AG: “With the IN-Campus, Audi is investing in its future viability and the Ingolstadt site. The new technology center will help to equip the employees for the major digitalization challenges and to safeguard jobs in the region.”

Thomas Vogel, Managing Director of IN-Campus GmbH (AUDI AG): “I view the project as a tremendous opportunity as we are making a hugely important contribution in developing this area. The IN-Campus stands for cooperation and allows specialist and high-tech partners to work together in one place. Everyone is pulling together here—Audi, the city of Ingolstadt and all project partners.”

Norbert Forster, Managing Director of IN-Campus GmbH (IFG Ingolstadt): “The transformation of the IN-Campus site from what used to be industrial wasteland into a high-tech area with a top-class technology center is a groundbreaking prestigious project with which an important contribution to the future viability of our site is being made. I am very proud that IFG is taking on a central role here in collaboration with AUDI AG.”

Dr. Rüdiger Recknagel, Head of Environmental Protection at AUDI AG: “We are making a commitment to Ingolstadt as a location and writing city history at the same time. We are proud to be conducting the first comprehensive remediation of a refinery site in Bavaria with this eco-friendly remediation project. In so doing, we are giving something back to both society and nature. Remediation of the former refinery site is a gigantic and unique environmental project.”