Skip to content
We are using cookies for a better user experience.
07/08/19
Neuburg a. d. Donau
Sport 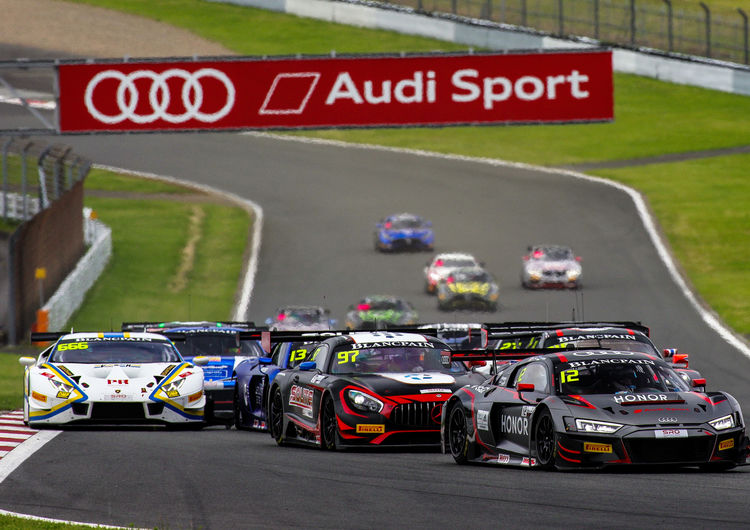 The month of July started with excellent results for the Audi R8 LMS in Japan, Germany and Portugal, and with victories for the Audi RS 3 LMS in North America, China and Italy.

First victory this season in Japan: The new evolution of the Audi R8 LMS has now also achieved its first win in the Blancpain GT World Challenge Asia. In the fourth event at Fuji, Japan, Audi Sport Asia Team Absolute demonstrated great fighting spirit twice. Weiron Tan from Malaysia shared an Audi R8 LMS with Estonian Martin Rump. Following a safety car period, Tan stormed forward from fifth to first place in the last ten minutes of the one-hour race on Sunday. The driver duo had shown a similarly good performance the day before, too. From seventh on the grid, Tan had improved to fourth position right on the first lap. During the pit stop, Rump took over the GT3 sports car, returned to the track in third place and captured another position. Tan and Rump are now sharing the fifth spot in the standings with a 26-point deficit. Four more races are still coming up at two events.

Dominant weekend at Hockenheim: The Audi R8 LMS was the car to be beaten in all three competitions on the fifth race weekend of the DMV GTC. In the Dunlop 60 race, the GT3 race car claimed its third victory in five races. Dennis Marschall had taken over the Audi R8 LMS of HCB-Rutronik Racing team in fourth position from Tommy Tulpe. In a fightback during the last few minutes of the race, the 23-year-old up-and-coming driver pushed past Simon Reicher, who ultimately finished runner-up. Third place went to twin brothers Dennis and Marc Busch, fourth to Dietmar Haggenmüller/Uwe Alzen and fifth to Carrie Schreiner. They all helped the Audi R8 LMS score a 1-2-3-4-5 result. The sprint races provided a similar picture. Uwe Alzen decided the first 30-minute heat in his favor, ahead of Simon Reicher, Dennis Busch and Tommy Tulpe. After this 1-2-3-4, another 1-2-3-4-5 result concluded the weekend: Simon Reicher finished the second heat in front of Carrie Schreiner, Marc Busch, Tommy Tulpe and Dietmar Haggenmüller.

Success as a guest: Fábio Mota used the opportunity of the Portuguese city street race in Vila Real to run as a guest in the Campeonato Open de Velocidade de Portugal racing series. On the third race weekend of the championship, he competed in an Audi R8 LMS of the Lema Racing team from Slovenia. The Portuguese started the first race from pole position and the second heat from position two, and went on to win these two races of the mixed sports and touring car racing series.

Demonstration in front of a large audience: Just two weeks after the fifth victory of the Audi R8 LMS in the 24 Hours of Nürburgring, British fans also got to watch the winners from the Eifel. Audi Sport driver Frank Stippler, who had decided the endurance race in his favor together with three teammates, drove his original winning car from Audi Sport Team Phoenix at the Goodwood Festival of Speed.

Premiere: In addition, Goodwood Festival of Speed visitors witnessed a double world premiere: not only was the new Audi R8 LMS GT2 unveiled at the event in the UK last Friday, but the spectators also saw the 640-hp customer sports car on the track for the first time. Nine-time Le Mans winner Tom Kristensen drove the brand new race car in the traditional “Goodwood Hillclimb.”

First victory in IMSA Michelin Pilot Challenge: Following four third and two second places clinched by the Audi RS 3 LMS in the North American racing series, the touring car now scored its first victory there this season. On the fifth race weekend at Mosport, Canada, South African Mikey Taylor and his American teammate Britt Casey Jr. won after two hours of racing with a 3.8-second advantage. They drive for the JDC-Miller MotorSports team. Gavin Ernstone and Jon Morley in another Audi RS 3 LMS clinched third place for Roadshagger Racing by eEuroparts.com. Halfway through the season, they are runners-up in the standings with just a five-point deficit.

Two successes in Asia: In the TCR China, Huang Chu Han was the driver of the weekend in the third of five events. He won both races on the circuit of Zhejiang in an Audi RS 3 LMS. As a result, the driver of the NewFaster Racing team has extended his advantage in the standings to eleven points.

In front in Italy: Jonathan Giacon was unbeatable on the fourth race weekend of the Italian Trofeo Super Cup at Adria International Raceway. In an Audi RS 3 LMS of the Tecnodom team, the Italian clinched pole position and won both races.

Second place in Portugal: Team AC Motorsport achieved second place in the TCR class in the 24 Hours of Portimão of the 24H Series. Frenchman Stéphane Perrin, Briton James Kaye and the two Belgians Mathieu Detry and Sam Dejonghe shared an Audi RS 3 LMS. Five TCR race cars in the field of 28 entrants had been on the grid in the south of Portugal.