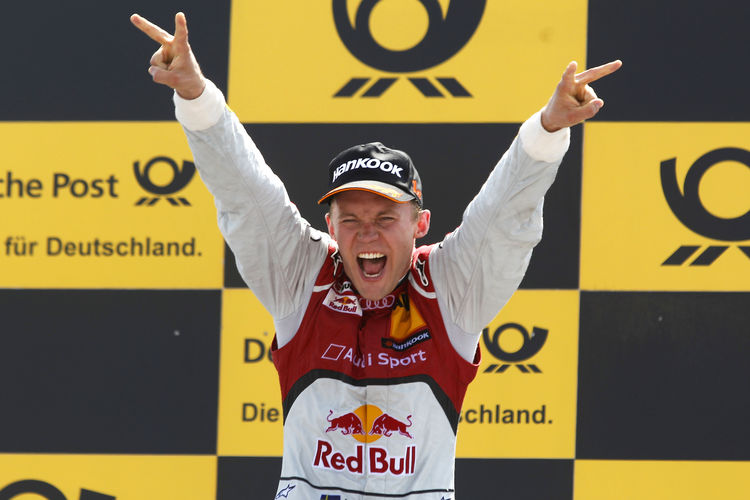 A great day for Audi and Mattias Ekström: In front of 126,000 spectators (throughout the weekend) the Swede from Audi Sport Team Abt Sportsline in the Red Bull Audi RS 5 DTM on his 35th birthday won the DTM season’s pinnacle event at the Norisring. At the same time, Audi driver Mike Rockenfeller in the Schaeffler Audi RS 5 DTM after an impressive recovery took the sole lead of the standings.

For Audi, this marked the first success at the DTM home round in Nuremberg since Laurent Aiello’s triumph in 2002, for Ekström the first victory in the Audi RS 5 DTM and for Audi Sport Team Abt Sportsline the first in a DTM Championship round since the race at Valencia in October 2011.

Right in the early phase of the race, Ekström overtook the BMW of title defender Bruno Spengler and the Mercedes-Benz of the fastest driver in qualifying, Robert Wickens, and just like his brand colleague Edoardo Mortara switched to the fast option tires on lap 13. Running on these tires, to the delight of the large crowd of Audi fans in the grandstands, the two managed to put an increasingly larger gap between themselves and their immediate rivals. On lap 64, Ekström took the lead and shortly before the finish had such a large advantage that even after the second pit stop he remained at the front and went on to cross the finish line as the cheered Norisring winner.

“This is a very special moment for me,” said the Swede who turned 35 on race day. “The home victory at the Norisring for Audi was something I still had on my list in the DTM. I’d like to thank everyone at Audi Sport, Team Abt, my engineer Florian (Modlinger), my guys and the mechanics. My RS 5 was perfect. Behind Edo (Mortara), I was able to take it a little easier on my tires. He had some problems while braking, so I was able to overtake him. It was thrilling and hot through to the end. I knew that it would be close in the end with Gary (Paffett). Fortunately, it worked out.”

Heading for a podium finish for a long time as well was Edoardo Mortara in the Playboy Audi RS 5 DTM of Audi Sport Team Rosberg. The Italian switched to option tires right on the fifth lap and after two early safety car periods was leading the field as of the 14th lap before letting Mattias Ekström go ahead. After the second pit stop, he was back on track right behind Gary Paffett. In the battle for second place, two collisions occurred between Mortara and Paffett. The second crash took both opponents out of the race shortly before the finish and prevented a possible one-two victory by Audi.

Outright sensational was the recovery shown by Mike Rockenfeller, who had to start the race from the last row due to a transmission change on his Schaeffler Audi RS 5 DTM. Within the space of a few laps, the leader of the standings battled his way forward into the top ten and made his two mandatory pit stops in direct succession on laps 13 and 15 during a safety car period. Thanks to this clever strategy by Audi Sport Team Phoenix and a flawless race, ‘Rocky’ recovered from 21st to fifth place and secured the sole lead of the standings with a two-point advantage over BMW driver Bruno Spengler.

Less fortunate in terms of strategy and safety car periods were Filipe Albuquerque (Audi Financial Services RS 5 DTM), Miguel Molina (Audi RS 5 DTM) and Adrien Tambay (Audi ultra RS 5 DTM), who despite fast lap times had to settle for positions 12, 14 and 15. Jamie Green had to park his Red Bull Audi RS 5 DTM on lap 66 in a promising position when the second gear got stuck. Timo Scheider (AUTO TEST Audi RS 5 DTM) was even prevented from starting at all due to a brake problem.

All these mishaps were unable to mar the great joy about Audi’s first victory at the Norisring since 2002. “What a brilliant day for Audi and the many Audi fans who’ve had to wait for a victory of their four rings here at the Norisring for such a long time!” said Dieter Gass, Head of DTM at Audi Sport. “We always came close in the last ten years – now it finally worked out. Mattias (Ekström) gave himself the nicest birthday gift by driving a perfect race. Edo (Mortara), too, was strong. It’s a shame that the two collisions happened with Gary Paffett at the end, as otherwise we’d have even had two Audi drivers on podium. That ‘Rocky’ recovered from the last row to take fifth place and now is the sole leader of the standings is brilliant. My thanks go to all who’ve been working hard to make this success possible.”