​Fifth victory of the season for Audi in the DTM 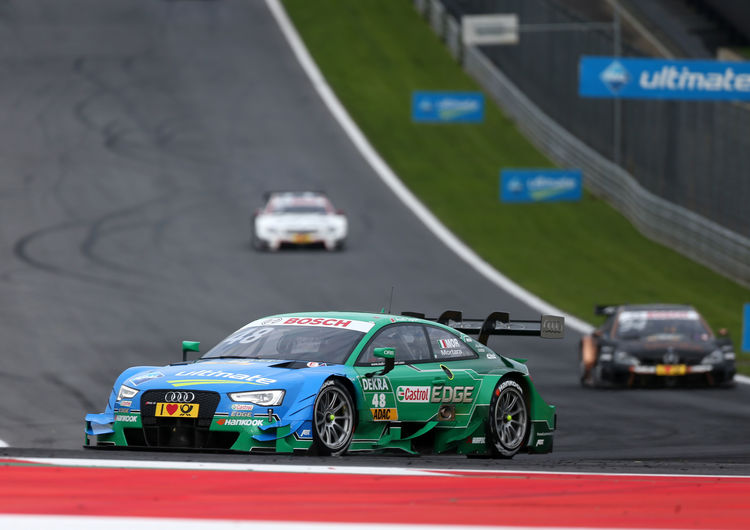 Five victories in nine races and the lead of the manufacturers’ classification: Audi is the best manufacturer in the DTM halfway through the 2015 season.

The man of the day in the ninth race of the season at the Red Bull Ring at Spielberg was Edoardo Mortara. The Italian from Audi Sport Team Abt Sportsline, after setting best times in both free practice sessions, clinched the top spot on the grid with a clear advantage and took a commanding race victory in his Castrol EDGE Audi RS 5 DTM. For Mortara this marked the third success in the DTM and for Audi the 72nd.

“When I’m in front I can control the race,” Mortara had announced after qualifying. From the second lap on, this was the case. The Italian managed to successively pull clear of his immediate rivals and gain more than a three-second advantage some of the time. “My car was simply perfect today,” Mortara said after crossing the finish line. “I’m proud of this success and overjoyed. I’m hoping for this to continue to tomorrow.”

An impressive performance was shown yet again by his team-mate Mattias Ekström as well. The Swede in the Red Bull Audi RS 5 DTM advanced from position nine on the grid to fifth place. During his recovery, he managed a particularly remarkable overtaking maneuver on the last lap against BMW driver Augusto Farfus as a result of which he secured two additional points.

Mike Rockenfeller thrilled the numerous spectators at the Red Bull Ring in the Schaeffler Audi RS 5 DTM of Audi Sport Team Phoenix with superb overtaking maneuvers too. After dropping to twelfth place on the starting lap following contact with BMW driver Bruno Spengler, he recovered to eighth place. A finish in the points was also achieved by Adrien Tambay in the Playboy Audi RS 5 DTM, in tenth place.

Major misfortune struck Jamie Green. The Briton took the lead from Edoardo Mortara at the start and came back from lap one as the front runner. But then the transmission of his Hoffmann Group Audi RS 5 DTM could not be shifted anymore. Green was forced to retire in the pits and, without any defenses, lost the lead of the standings to Mercedes driver Pascal Wehrlein (94 points).

The best Audi driver after the first half of the season is Mattias Ekström in second place of the standings with 86 points, ahead of Edoardo Mortara (83) and Jamie Green (81). In the manufacturers’ classification, Audi, after nine of 18 races, continues to head the standings with 337 points, trailed by Mercedes-Benz (300) and BMW (247).

“Obviously, we’re very happy about Edo’s (Mortara) dominant victory,” said Head of Audi Motorsport Dr. Wolfgang Ullrich. “All our cars were very fast in the race. That makes the retirement of Jamie Green, who could have made a major step forwards today, all the more frustrating. The transmission is a specification component in the DTM. We need to find out what the problem was and do everything within our means to prevent something like this from happening again.”

The second half of the season will begin on Sunday with race ten that will be started at 15.18 (live coverage on ‘Das Erste’ beginning at 15.00 CEST).