Skip to content
We are using cookies for a better user experience.
06/28/21
Neuburg a. d. Donau
Sport 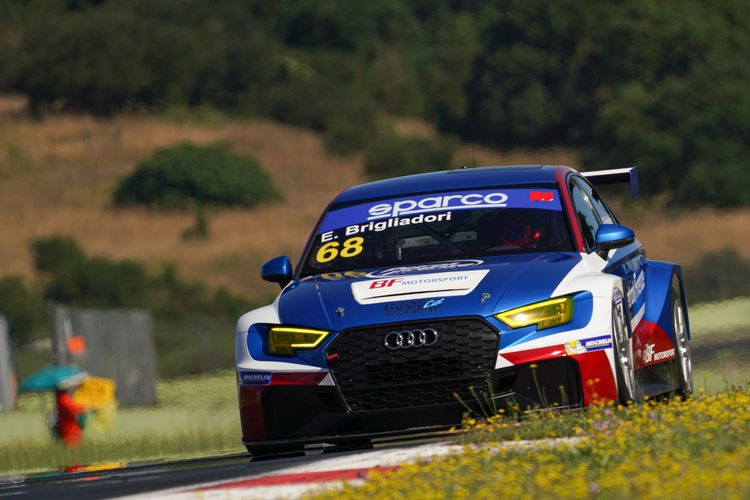 Audi Sport customer racing is ahead in one of the best national TCR racing series thanks to a success by Team BF Motorsport in Italy. Podium finishes in the GT3 and GT4 categories around the globe round off a good weekend for the four rings in customer racing.

Exciting battle at the season’s halfway point in Italy: Eric Brigliadori extended his lead in the standings at the third of six TCR Italy events. The Italian privateer secured pole position for the first of two sprints by a margin of 48 thousandths of a second in the Audi RS 3 LMS at Vallelunga. In the first race, the rookie driver used his starting position to take a clear lead. Even a safety car phase did not faze him and he won by 5.6 seconds on the track near Rome. He started the second race with a reversed grid for the top eight drivers from the fourth rowand improved to fourth place. Pursuer Nicola Baldan in a Hyundai pushed the Audi RS 3 LMS wide on the last lap, but received a penalty for this, so that the Audi privateer retained his fourth place. With his BF Motorsport team, Brigliadori had come to Vallelunga with a two-point lead and departs with a seven-point credit ahead of Hyundai driver Antti Buri. In the team standings, BF Motorsport is second and equal on points with championship leader Target Competition. The second half of the season starts in Imola in a month’s time. 26 drivers have already scored points in the current season. This makes TCR Italy one of the strongest national TCR racing series worldwide.

Club racing successes at the start of the season: Max Frederik Gruhn returns from the season opener of the Spezial Tourenwagen Trophy with two trophies. The privateer driver took second place in his class in the first race at Oschersleben with the Audi RS 3 LMS and won his classification in the second sprint.

A trophy at the inaugural round of a new racing series: With the TCR South America, the globally successful TCR category is also starting in South America for the first time. With four race cars, Audi was the most popular brand in the field alongside Honda. Team Cobra Racing achieved the best result for the four rings in the first race at Interlagos. Rodrigo Baptista had started fourth in an Audi RS 3 LMS on the Grand Prix circuit in São Paulo, Brazil. On the ninth of 13 laps, the Brazilian overtook the Honda driver in front of him, José Sapag, to finish third. The new race series combines different race distances over the course of the season. After two sprints at the start, a 160-kilometer endurance race is on the calendar in Curitiba on July 25.

Best result of the season at the Nürburgring: At the fourth round of the Nürburgring Langstrecken-Serie, Phoenix Racing recorded its best result with the Audi R8 LMS so far in 2021. Ernst Moser’s squad was delighted with second place after finishing third on the second race weekend in April. Audi Sport driver Frank Stippler drove the start of the fourth event while his teammate – privateer Vincent Kolb – sat behind the wheel in the second half of the 4-hour race. Kolb now leads the standings in the SP9 Pro class after four of eight races. In the NLS Speed Trophy, Manthey Racing is in first place with Porsche and Phoenix Racing equal on points in second. Already in qualifying, another Audi R8 LMS had attracted attention: Audi Sport driver Patric Niederhauser had managed the fastest time for the Lionspeed by Car Collection Motorsport team. With his three private teammates Lorenzo Rocco, Patrick Kolb and Milan Dontje, he finished seventh in the end.

Victory in the finale: In the North Island Endurance Series in New Zealand, a privateer Audi driver won the one-hour race. Anthony Leighs, driving a first-generation R8 LMS, won on a wet track at Pukekohe with a 15-second advantage over Holden driver Tim Edgell. It was the first ever victory for Leighs, who is runner-up in the championship in the one-hour category. In the three-hour category, Audi team IMS had to concede defeat without a fight after a case of illness in the driver line-up forced their withdrawal before the race weekend. Neil Foster/Jonny Reid finish the season in the Audi R8 LMS in second place in the standings after deducting the drop scores, level on points with the new champions Alex Riberas/Darren Kelly in the Aston Martin.

Third place at the season opener: In the Spezial Tourenwagen Trophy, Uwe Alzen once again proved that he is among the fastest, but the former pro was unable to match his flawless form of the previous year with an unbroken winning streak. In qualifying, the driver from the Westerwald region showed by an advantage of 3.3 seconds what is possible with the Audi R8 LMS at Oschersleben. Alzen was confidently leading the second race until a wheel nut came loose. After the involuntary pit stop, the privateer driver still fought his way up to third position.

Successful debut: Salman Owega made a good debut at the season opener of the GTC Race club sport series. In his first competition at the wheel of an Audi R8 LMS in GT3 version, he finished third in the Goodyear 60 race at Oschersleben. Owega is only 16 years old and was competing for Phoenix Racing. The following day, he fought a thrilling duel with Phoenix teammate Carrie Schreiner in the first sprint. Trailing Mercedes driver Tim Heinemann by just 0.8 seconds, Owega finished second after 21 laps. In the second sprint, another Phoenix driver was on the podium: Audi Sport driver Markus Winkelhock clinched third place in the Audi R8 LMS.

1-2-3 victory in club racing: Three Audi R8 LMS GT4 cars were in front in the endurance classification at the second round of the Norddeutscher ADAC Börde Tourenwagen Cup. Michael Golz/Tobias Erdmann won the two-hour race at Oschersleben with a 31-second lead ahead of Max Zschuppe/Tim Rädlein and Vivien Schöllhorn/Tom Spitzenberger.

Best result of the season in Great Britain: Team Steller Motorsport showed a strong performance at the second round of the British GT at Silverstone. After three hours of racing, Richard Williams/Sennan Fielding were second best of 13 teams in the GT4 category in their Audi R8 LMS GT4 with a gap of only 3.3 seconds.

Third place at Mid-Ohio: At the fifth round of the American Trans-Am club racing series, a privateer driver managed a podium result in the Audi R8 LMS GT4. Seth Lucas finished third out of seven participants in the SGT class in the car entered by the Ave Motorsports team at Mid-Ohio.

Battling with the champions: At the season opener of the fourth Audi Sport Seyffarth R8 LMS Cup at Oschersleben, two former Cup winners and another talent were the best drivers. Last year’s champion Tim Reiter overtook Robin Rogalski, the 2019 title winner who started from pole position, in the very beginning of the first race. Tom Spitzenberger also passed Rogalski on the first lap. An entertaining duel unfolded between the two. Rogalski passed his opponent with a contact on lap three, but Spitzenberger striked back on lap nine and passed the man in front of him again. So the final result was Reiter ahead of Spitzenberger and Rogalski. In the second race, the same trio was fastest, but in a different order. Tom Spitzenberger celebrated his first race win, having already secured a lead of 0.957 seconds in qualifying. Over the sprint distance of 30 minutes, he controlled the race and built up a lead of 6.6 seconds. Robin Rogalski finished second ahead of Tim Reiter. Spitzenberger now has a four-point lead over Reiter and Rogalski after the first of five events.