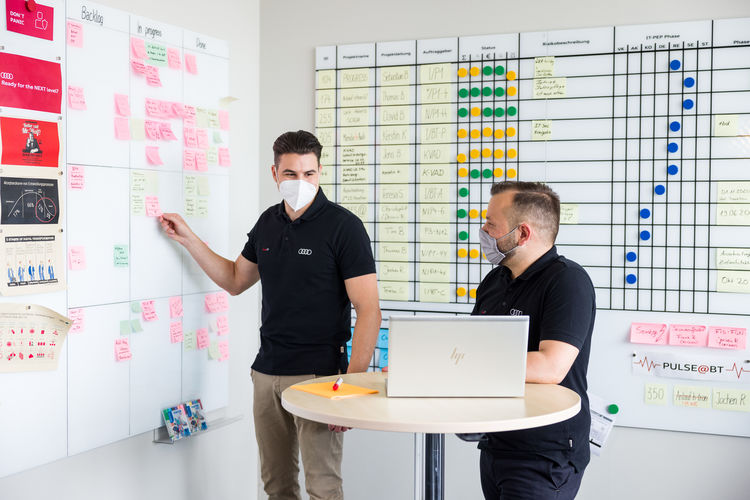 Sören Gall (left) and Bünyamin Akdemir are participants of the pilot project called “Digital Shift – in Production and Logistics” at the Neckarsulm site. The aim is to equip employees with the skills needed for the digitization of production and logistics processes. The program at the Neckarsulm site will serve as the blueprint for additional pilot projects. The Digital Shift principle is now also being expanded at the Ingolstadt site.
Download PDF (188 KB)
Facebook
Twitter
LinkedIn
WhatsApp

“Digital Shift”, a future-oriented pilot project that aims to transform the workforce, has been launched at Audi site at Neckarsulm. The project gives employees the opportunity to qualify for future jobs in Digital Production. An unconventional recruiting concept puts the focus on interests instead of qualifications. This qualification initiative will serve as the blueprint for additional pilot projects. Under the project name “Digital Future”, IT-minded employees at the Ingolstadt site will also have the opportunity to upgrade their qualifications.

The lighthouse project called “Digital Shift – in Production and Logistics” has begun with twelve employees from Production applying for the further training after it was promoted internally. The aim is to equip Audi employees with the skills needed for the digitization of production and logistics processes. “There are numerous talents at Audi just waiting to be discovered. Many of our employees have hidden abilities and knowledge outside of their job that are worth encouraging,” says Ivan Jukic, head of IT at the Neckarsulm site. “Some program websites or optimize gaming PCs in their free time. It’s exactly these employees that we want to attract with the program so that we can further expand our digital skills at the site,” continues Jukic.

All participants build up their skills for working in the area of IT by alternating between training and practical learning. During and after the training, they can expect jobs in application operation, software development, and IT infrastructure. The theory is taught by the Audi Akademie. The program includes basic courses on hardware and software, as well as training on special topics such as big data, cybersecurity, and SAP applications. The training takes 6 to 18 months, depending on the level of prior knowledge, individual learning speed, and requirements of the future job. Training advisors from the Audi Akademie and people from the department accompany the employees and adjust the duration and content based on the progress made and how far the skills have developed.

Internal selection process: motivation, interests, and abilities – all ahead of qualifications

The recruiting concept for the pilot project is somewhat unconventional. “We didn’t use the career path of our employees as a basis in the classical sense, but looked at who has an affinity with IT. We looked for people who, irrelevant of their qualifications, are passionate about and show potential for digitization and IT topics,” says Stefanie Ulrich, head of HR in Neckarsulm. At the same time, the training team identified skills that each department needed. These requirements were then compared with the applications, and a training concept was developed based on this. Eleven of the twelve participants have already completed their training at Audi. Half in electrical engineering and the other in body construction, warehouse logistics, and production, toolmaking, and mechanical engineering.

The program is a good example of the transformation efforts at Audi. The brand is preparing itself for the future, with courage and determination, a willingness to change, and a clear awareness of its own DNA. This also calls for new ways of thinking and working within the workforce. Rolf Klotz, chairman of the Works Council in Neckarsulm, is also convinced that Digital Shift will open up new doors: “The program offers many colleagues the chance to equip themselves for the transformation in an unconventional way. The goal has to continue to be creating more creative training opportunities. There is still a lot of talent hidden in our workforce that we need to promote.”

Bünyamin Akdemir and Sören Gall are two participants of Digital Shift. After completing the program, Akdemir is going to work as a product manager in the IT infrastructure for Audi. Thanks to Digital Shift, Akdemir grabbed the chance to turn his hobby into his career. In 2004, he began training as a bodywork and vehicle construction mechanic at Audi, after which he worked as a production worker in body construction, and later constructed bodies in the Surface and Special Vehicles division. “To be able to develop myself together with the company is a great opportunity,” says Akdemir. “I’ve always had an affinity with digital topics. I programmed some smart home applications while building my family home recently and realized once again just how much I enjoy it. When I found out about the further training, I applied for it directly.”

Sören Gall has also been an Audi employee for a long time. In 2009, he started to train as an electronics engineer for automation technology in Neckarsulm. This was followed by his bachelor degree in production and process management. During his practical semester, he worked at Audi in the support and analysis center, followed by the maintenance department. Among other things, he was responsible for demand and procurement planning in the development of new facilities. In this job, he came into contact with SAP applications on a daily basis. A good foundation for further training in the area of in-house SAP consulting and SAP system integrity: “I was often the contact person for SAP questions in daily business for my colleagues in my previous department. This gave me the drive to continue training so I could go from being a user to a IT solutions designer,” says Gall.

Both participants agree that the path of transformation also means continuously going outside your comfort zone and being open to new things. This demands a high level of drive, discipline, and independence. At the same time, there was a lot of support from the department, human resources, the Works Council, and the Audi Akademie, as well as regular feedback meetings. “We feel very much appreciated,” says Gall.

Digital Shift: pioneer of the transformation

Against the backdrop of fundamental change in the industry, the Digital Shift pilot project is just one piece of Audi’s human resources transformation puzzle. “The training program is a blueprint for further transformation projects. We are gaining valuable experience in small, bite-size chunks, which we can then scale up and transfer to other areas,” says Stefanie Ulrich. For instance, the Digital Shift idea is now being spread to the Ingolstadt site. Under the project name “Digital Future”, starting immediately tech-savvy Audi employees can register for advanced training in IT. Potential candidates no longer come from Production alone – instead, the aim is to draw applicants from other fields as well.

The pilot project in Neckarsulm will also be continued and is ready to start its second round this year. The continuous feedback provided by the current participants has been taken on board for the further development of the concept. “Now it’s a matter of implementing the transformation even further. Together, we are systematically promoting the digital transformation at the site,” says head of IT Ivan Jukic. As it becomes a leading factory for digital production and logistics within the Volkswagen Group, Digital Shift is playing a part in transforming and facilitating long-term development of the Neckarsulm site.