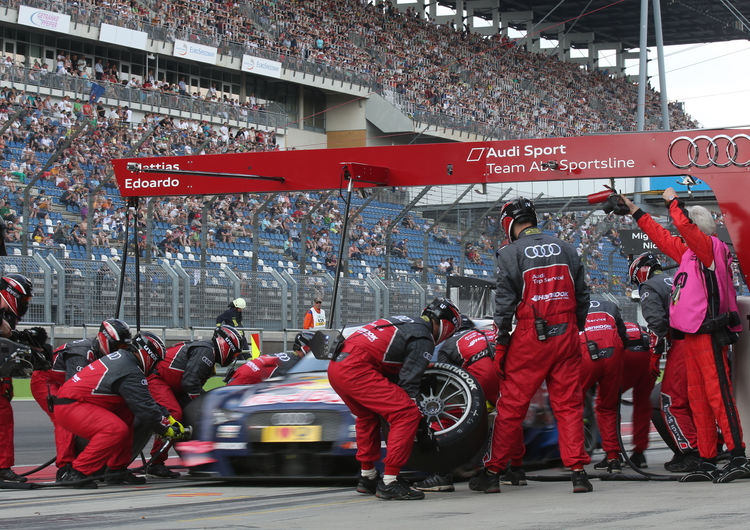 The Motorsport Festival at the Lausitzring celebrated a successful premiere with 67,500 spectators in attendance. The third DTM weekend of the year was also a great success for Audi Sport.

“It goes without saying that we kept an eye on events during the Motorsport Festival at the Lausitzring from Le Mans. It was great to see the packed grandstands and that the joint appearance of the DTM and ADAC GT Masters was well received by the spectators. We are of course particularly pleased that Audi made such a strong showing in front of the many fans. Of more importance is the fact that the incident in the pits had no serious consequences. Also from Le Mans best wishes and a speedy recovery to the injured mechanic.”

“It was a very good weekend for Audi. The one-two finish on Saturday was of course the highlight. On Sunday we struggled a little in qualifying. After the best Audi was effectively out of the running after the jump start at the start of the race, we still recorded a good team result with second, fourth and eighth positions. Due to the fact that Lucas Auer won, a driver that is not so high in the standings, it was almost like a victory for us. The accident with our mechanic subdued the mood slightly. Something like this should not happen. But you can’t criticize Edoardo (Mortara). We hope that our injured colleague makes a full recovery.”

“The weekend went exceptionally well for me. Second yesterday, fourth today and 30 points on this weekend – I’m very pleased with this. This is exactly what I needed to move back into striking distance in the drivers’ classification. It was a big jump forwards to fourth place. Maybe second could have been possible on Sunday, but I made a couple of small mistakes. This can happen quickly when you drive on the limit. We still have twelve races ahead of us and aim to score points consistently. We’ll try to do this at the next race around the Norisring, even though it won’t be easy there as is always the case.”

“My car felt good the entire weekend – which is why the qualifying positions were all the more disappointing. In the shorter race on Saturday, I couldn’t do better than sixth. In contrast, the race on Sunday was fantastic. I made a reasonable start and to begin drove at the same pace as all the others. When the pit stops started I knew: Now it’s happy hour! I was fast, and after my pit stop rejoined the track just behind Jamie (Green) and Gary (Paffett). I was faster and overtook both of them. Then I hunted down Robert (Wickens) and overtook him as well. After a disappointing qualifying it was a fantastic race for me. It was only after the race that I heard that one of our mechanics had been injured during a pit stop. These things also hurt me. I hope that Werner recovers quickly and will be with us again soon!”

“We had a perfect Saturday with my second DTM victory. After the season didn’t start as planned, we are now competitive and fight for a top 10 position in the championship. Unfortunately, Sunday didn’t go as planned: Augusto (Farfus) pushed me into the wall, I stood on the brakes and just as I wanted to swerve around him he also braked, I couldn’t do anything. I think the blame can be apportioned 50:50. I thought it was unnecessary to block me like this as I had DRS and could have overtaken him easily.”

“So, my motto was unfortunately: free practice great, qualifying bad. I was at the front in every free practice, in qualifying not any more. I don’t fully understand why it was like this. Both the races were then okay. On Saturday tenth, on Sunday eighth from 15th on the grid. That was a strong race, I made some good maneuvers. I’m happy to take the points. Now it’s a question of getting us into a good starting position in qualifying and then hopefully they’ll be buckets of points.”

“A terrible weekend, hopefully the last of its kind this year. Such an accident like today in the pit lane just shouldn’t happen. We all have to question ourselves and work hard with our pit crews so that such an incident doesn’t happen again. I’m depressed and can only hope that our mechanic makes a speedy recovery.”

“That was a pretty bad weekend for me. We simply lacked the pace in many places. A few unanswered questions still remain as to why this is so. We changed the car overnight. It didn’t help in qualifying, but at least in the race. This was the only positive point this weekend.”

“In keeping with the season so far a very sobering weekend. Especially on Saturday. Qualifying went better on Sunday when I was fourth on the grid and best Audi. And then I jump the start – for the first time in ten years DTM. Right now when we needed a good result to get out of the hole. Obviously the race was as good as over afterward. A real shame because much more was possible. I hope that everything falls back into place again soon.”

“I can’t say a lot. I lost the flicks twice in the race through light contact. I wasn’t quick enough in both races, and there was nothing I could fight for as a result. In qualifying on Saturday everything went quiet well. I’ll quickly forget this race and now look forward to the Norisring.”

“We are extremely sorry that one of our mechanics injured his foot during the pit stop and must spend a night in hospital. This shouldn’t happen. As a team we’ll do everything in our power to ensure that such a situation is not repeated. You can’t criticize Edo (Mortara) at all. Fortunately the accident had no serious consequences. The entire team wishes Werner a rapid recovery. Apart from this incident, it was a super weekend. It’s been a long time since we raced in front of such a fantastic crowd. Miguel’s victory on Saturday and the latest Eki show on Sunday were brilliant. Unfortunately Nico (Müller) didn’t live up to his promise in both qualifying sessions, otherwise a better result would have been possible. For Edo this weekend didn’t run so smoothly. But he also scored points. They could be more important this year than ever before. Now we look forward to our home race at the Norisring.”

“After a dreadful day on Saturday, we got our act together and looked what we could change on the cars. All the steps went in the right direction. Rocky qualified fourth on the grid as best Audi driver. Unfortunately he jumped the start. These are mistakes that can happen. We are one hundred percent behind Rocky. After the drive-through penalty he showed from the back of the field just how fast he could drive with the car. The car also worked well for Timo (Scheider) in the race and he could set fast laps. We take this as positive fact and look forward to the Norisring before visiting our classic track Zandvoort.”

“On the whole that was a good weekend. Jamie (Green) has scored a lot of points in the last three races and is fourth in the championship only one point behind Eki. In contrast to last year, we must now score points consistently and then we’ll see where we stand at the end of the season. Adrien (Tambay) was on the pace especially in first qualifying. We’ll now analyze just what went wrong in the races.”