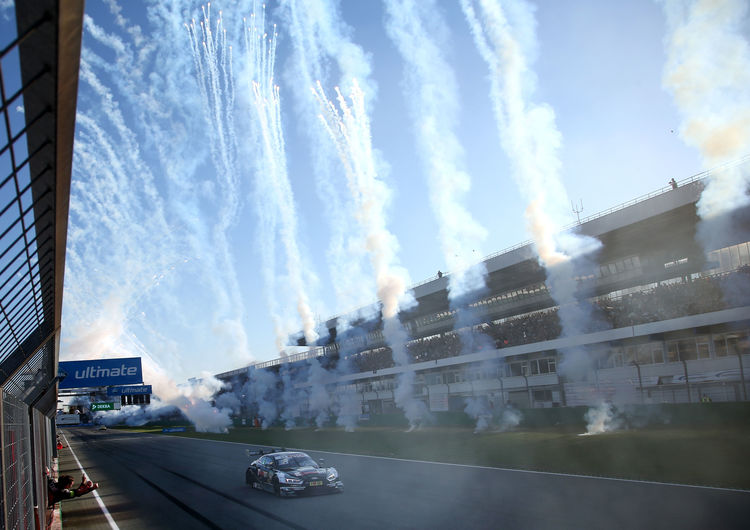 Audi secured all three DTM titles in the finale at Hockenheim. Quotes from the victorious Audi squad following a spectacular and successful 2017 DTM season.

Dieter Gass (Head of Audi Motorsport)
“What a finale! The many spectators who traveled to Hockenheim in this fantastic fall weather arguably had no reason for regrets. Both races were spectacular and the title decision couldn’t have been closer. That in the end in René (Rast) a rookie clinched the title – the first time ever in the ‘new’ DTM – is an incredible story. René showed an awesome season and at the crucial moment drove a mega race. He didn’t miss any opportunity and clinched a deserved title win. Our big aim was the drivers’ title and we wrapped it up on Saturday. That then, in the final race, four drivers from all Audi teams were still able to battle for the title was fantastic. We again had a very good car that, above all, delivered a strong racing performance. That made it possible for us, for the first time since 2004, to again claim all three DTM titles in the same year. My thanks go to everyone who made this possible: our squad in Neuburg, Ingolstadt and Neckarsulm, our teams and drivers and, last but not least, our suppliers and partners. The DTM this year showed a strong upward curve. That’s why we’re already very much looking forward to the title defense next season.”

René Rast (AUTO BILD MOTORSPORT Audi RS 5 DTM #33) position 6 / position 2
“A brilliant year, a brilliant last day. I had huge fun the whole season. Thank you to Audi, thank you to Rosberg and thank you to everyone who helped me on my way to the title. We had highs as well as lows. I believe the key to success was that we never stopped working hard for it. That we achieved it in the end is simply incredible.”

Mattias Ekström (Red Bull Audi RS 5 DTM #5) position 11 / position 8
“Obviously, the third title was our big aim. In the end, just a few, yet crucial, points were missing. Our qualifying performance this weekend was just not good enough – that was the key. And then I received a penalty on top of that – that was the killer. Generally, it was a good season. I was particularly happy with my racing performance. But in qualifying, I wasn’t good enough.”

Jamie Green (Hoffmann Group Audi RS 5 DTM #53) position 1 / position 5
“The season was one of ups and downs, not only for me. That six drivers traveled to the finale with title chances shows how unpredictable the DTM was this year. Aside from the problems that slowed me here and there, it was a real pleasure to drive as strong a car as the Audi RS 5 DTM. This is a car any race driver can only wish for. Having four drivers heading the standings, plus winning the teams’ classification – you really can’t achieve any more than that. Thank you also to Team Rosberg for the mega job the guys delivered.”

Mike Rockenfeller (Schaeffler Audi RS 5 DTM #99) position 2 / position 3
“The team and I were bent on getting out of the hole we were in last year and we managed to do that. As far as the races go, we were doing really well. I won once and was on podium a few times. That in the end it wasn’t enough to finish at the far front was due to the less than perfect qualifying results. Rosberg and René (Rast) simply did a superb job in that respect and in the end clinched a deserved title.”

Nico Müller (Playboy Audi RS 5 DTM #51) position 12 / position 11
“Position twelve in the overall classification is not what you wish for. Especially at the beginning of the year we made a few mistakes that quickly threw us out of the title race. At least we were still able to set a few highlights, particularly my double podium at Spielberg. We can build on that for next year. I’d like to thank my team that always worked hard for success. There’s not a lot that needs to be said about René (Rast): winning the title as a rookie is simply incredible. I can only take my hat off to that. He and Team Rosberg did a brilliant job.”

Loïc Duval (Castrol EDGE Audi RS 5 DTM #77) position 18 / position 15
“I knew that as a rookie it wouldn’t be easy in a series with a field as strong as that of the DTM. But I definitely did not imagine things would be going the way they did. At least, my performance curve shows an upward trend. The races at Moscow and Spielberg were pretty decent. Obviously, my second place at Zandvoort was the highlight. Here at Hockenheim, however, things didn’t go well at all. But that’s the way it is in the DTM. A number of drivers have confirmed that to me. At times you’re just following the field and suddenly you’re back in contention. What matters is to never stop giving your all for success. My teammate Rocky is a perfect example. So, in that respect, I’m looking ahead to next year with confidence.”

Arno Zensen (Team Director Audi Sport Team Rosberg)
“Following his strong guest performance last year at Zandvoort, if not earlier, René (Rast) was my absolute dream campaigner and he really fits our team like a glove. He and Jamie (Green) perfectly complemented each other. It’s always been my wish to have two equally fast drivers in the team, and this year we’ve had that. That both would be battling for the title in the last race, though, I wouldn’t have imagined in my wildest dreams. It was a nerve-wracking and emotionally brutal weekend at Hockenheim. For Jamie, it’s extremely tough that he just barely missed out again this year. His retirement shortly before victory at Spielberg was arguably the darkest day in my career as a team principal. And here at Hockenheim, this unfortunate grid penalty was slapped on him. Still, he came fifth from the rear of the field. The kind of misfortune this guy has to bear is incredible. But I think that this year, once again, everyone has seen what kind of a fantastic race driver he is and there’s arguably no-one who would have begrudged him the title. But, as it is, only one driver can become champion and this year it was deservedly René. I really take my hat off to him. But also to Audi for a fantastic car and all the support. I’m incredibly happy about the teams’ title as well. That one’s for my guys. I’m really proud of them.”

Thomas Biermaier (Team Director Audi Sport Team Abt Sportsline)
“Congratulations to René Rast and to Team Rosberg who were extremely strong this year especially in qualifying. Congratulations also to Audi on the first DTM triple since 2004. The Audi RS 5 DTM was the strongest car this season, so Audi has deservedly won all three titles. For us, it was a disappointing weekend. We only scored four points on both days. We simply weren’t fast enough here and are going to analyze why that was the case. Last year, with Edo (Mortara), we were just lacking four points to clinch the title and now three with Eki. That’s very painful and really tough for the team that did a superb job throughout the year. Still, it was a tremendous DTM season and an incredibly thrilling finale. We’re already looking forward to 2018. We’re fighters and are going to come back stronger!”

Ernst Moser (Team Director Audi Sport Team Phoenix)
“How strong the Audi RS 5 DTM was this year was especially obvious in the last races when all cars were running with the same weight. Naturally, working with such a fast car is fun. A big thank you for that to Audi. The DTM delivered many tremendous races to the fans. And the full grandstands at the finale at Hockenheim have already whetted our appetite for next year. Phoenix has found its old strength again with Rocky (Mike Rockenfeller). He drove a fantastic season. With Loïc (Duval), except for the podium success at Zandvoort, things didn’t go the way we’d been hoping for. We now need to find out the reason. Congratulations and huge compliments to Team Rosberg and the two drivers on a truly masterful performance.”