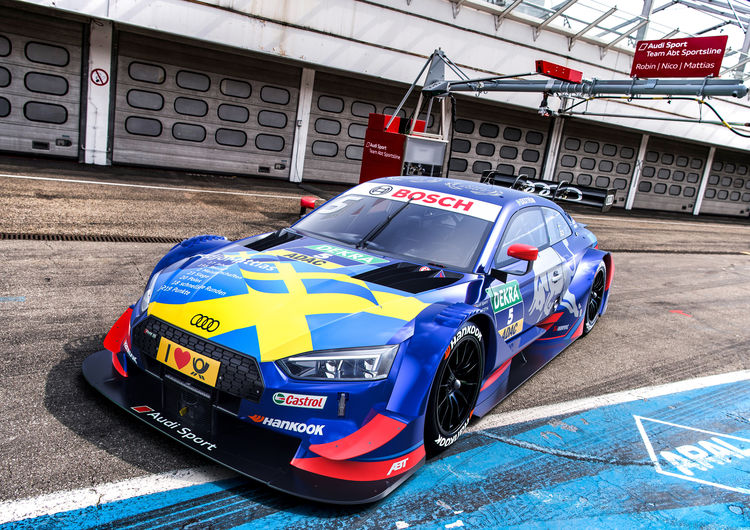 Emotional farewell after 17 years in DTM: Mattias Ekström will race in an additional Audi RS 5 DTM in the DTM season opener at the Hockenheimring, so giving motorsport fans yet another reason to watch the races on May 5 and 6 either live at the venue or on television.

At the end of January, Mattias Ekström announced his departure from the DTM. This year, he is concentrating on the commitment in the FIA World Rallycross Championship with his team, EKS Audi Sport. A tough decision for him – not least because after 17 years in DTM he has not been able to say goodbye to his fans in an appropriate setting yet. Audi is now giving this opportunity to the Swede who lives in Munich at the DTM opener.

“Mattias decided in winter to end his unique DTM career,” says Head of Audi Motorsport Dieter Gass. “He also told us that he’d very much like to say goodbye to his DTM fans in a special way. This is how the idea of a farewell weekend was born. I think that for him, for the DTM, for the fans and, obviously, for Audi too, it’s great that he’ll be on the grid once more in the season opener at Hockenheim. There were a few obstacles to overcome, but we made the fielding of a seventh Audi RS 5 DTM possible. For our squad, this will be no mean feat. At the same time, everyone in the team was immediately thrilled by the idea and spontaneously agreed to support it.”

The 39-year-old Swede will contest the first two DTM races of the 2018 season outside the classification. In addition, a number of activities with the two-time DTM Champion are planned for the fans. “I suppose I’ll be signing more autographs this weekend than normally in a full season,” says Mattias Ekström. “But I’ll be happy to do that. It’s great that Audi is making this possible for me. After 17 tremendous years, it was an incredibly tough decision to no longer race in the DTM. The day it was announced was one of the most emotional ones in my career. I’m sure there’ll be plenty of goose-bump moments at Hockenheim too. I’m mega excited about it already.”

Mattias Ekström started his DTM career in 2001 at the age of 22 in Audi’s customer team ABT Sportsline. In 2004, he competed as a factory driver for the first time and immediately clinched his first DTM title. Title number two followed in 2007 and last season, he just barely missed scoring another overall victory. In total, the Swede has contested 195 DTM races in 17 years to date. His two titles, 23 victories, 20 pole positions, 18 fastest race laps and 1,219 points make him the most successful Audi DTM campaigner of all time.

Ekström will contest his two farewell races in Audi Sport Team Abt Sportsline as well. His Audi RS 5 DTM will feature a special livery of his longstanding partner Red Bull including the hashtag #AdjöMattias. Ekström will race without prior tests, so being able to familiarize himself with the current DTM car and reduced aerodynamics only at Hockenheim. Even so, Head of Audi Motorsport Dieter Gass is expecting the Swede to be fully competitive. “Mattias has always gotten used to a new car quickly. I’m sure that in his farewell race he’s not going to be just cruising either. He’ll live up to his motto ‘Go hard or go home’ in every respect.”

Tickets and Audi fan packages are available on the internet at www.audi.com/dtm. In Germany, the DTM’s new TV partner SAT.1 will air live coverage of the season opener.