DTM countdown: strong new partners for Audi in the DTM 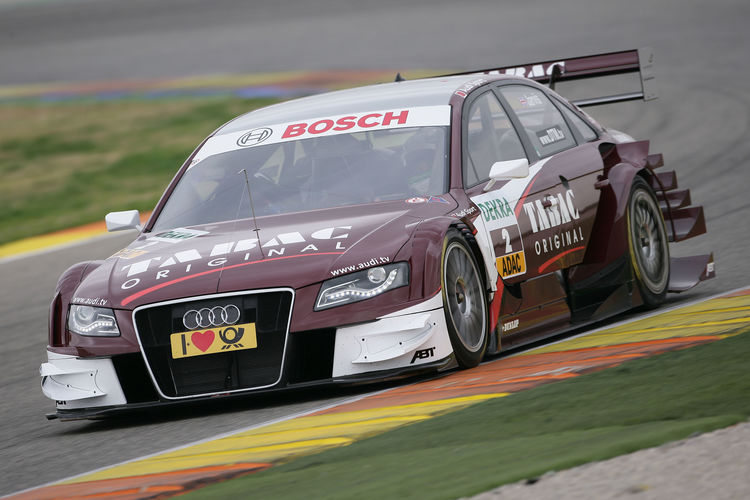 Audi will start into the 2010 DTM season at the Hockenheimring on April 25 with strong new partners. This week, the Audi A4 DTM cars sporting their current colors can be seen for the first time at the official DTM tests at Valencia, Spain.

Audi is one of the most successful automobile manufacturers in the world – and the first and only one so far to have won the DTM drivers title three consecutive times: in 2007 with Mattias Ekström, and in 2008 and 2009 with Timo Scheider.

Three renowned new partners will jointly tackle the “title defense” project with Audi in the 2010 season: Tabac Original, TV Movie and the Schaeffler Group with its LuK and INA brands – like Audi, all of them are premium brands and, for the most part, the number one in their segments.

“That we will have such renowned partners on board underscores the attractiveness of the Audi brand and the high caliber of the DTM,” says Siegfried Krause, Head of Partnerships at Audi Sport. “Anyone who invests in sport sponsoring today rightly has very high expectations of their investment. With Audi, partners are in good hands in this regard.”

The same is true for Tabac Original. The classic fragrance that was recently awarded the title “brand of the century” by a high-caliber judging panel had a previous sponsoring commitment in the DTM back in the nineteen-nineties. Now that the market leader for after-shave products is returning to the most popular international touring car racing series, it has deliberately opted for the brand with the four rings. “Tabac Original sets standards – Audi sets standards,” say the makers of Tabac Original. “The two brands perfectly fit together.”

By teaming up with TV Movie from the Bauer Media Group, Audi has managed to win one of the major German magazine brands as a premium partner for the DTM. In addition to various sport partnerships which include FC Bayern München among others, TV Movie will thus extend its involvement in motorsport as well. The DTM partnership will be supported by various forms of editorial coverage and campaigns.

The return of the Schaeffler Group means that a long-standing Audi partner will be part of the team again. As a renowned automotive supplier, the Schaeffler Group has maintained ties with Audi for many years and has also accompanied Audi in motorsport. With its INA, LuK and FAG brands, it offers a wide range of elements for engines, transmissions and suspension systems. The reduction of fuel consumption and CO2 emissions is one of the focal areas of the company’s innovations in the automotive sector. In addition, the Schaeffler Group is the leading manufacturer of roller bearings and linear products.

Every one of the total of nine Audi A4 DTM cars will start from the grid sporting an individual livery so that fans can immediately recognize it. The Tabac Original colors will be featured on the Audi A4 DTM driven by Oliver Jarvis. TV Movie determines the branding of Alexandre Prémat’s A4. The LuK logo will be emblazoned on Mattias Ekström’s car and the INA logo on the Audi driven by Mike Rockenfeller.