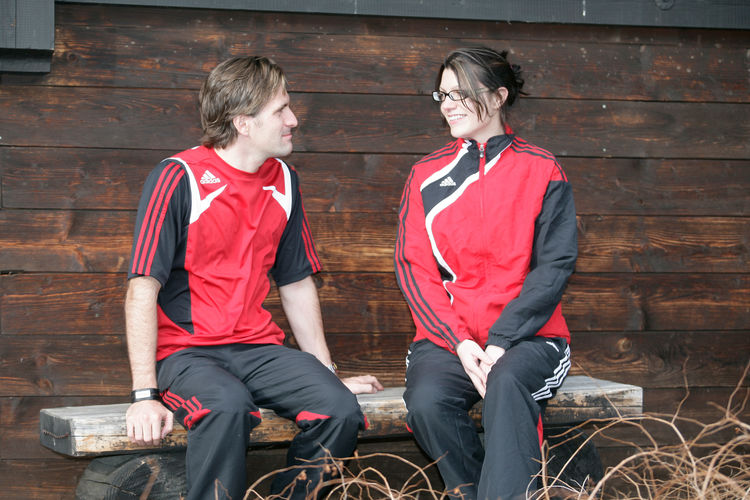 Markus Winkelhock and Katherine Legge will be in for some completely new challenges in the 2010 DTM: for the first time, both of them will compete as team colleagues for Audi Sport Team Rosberg. That the driver from southern Germany’s “Swabia” region will continue to advertise the men’s magazine “Playboy” on the Audi A4 DTM while Katherine Legge will represent the colors of “Glamour” magazine should add a dose of lifestyle spice to the DTM – and can be expected to inspire the media to come up with some clever comparisons and puns.

“People have been telling me that they think this sponsor fits me pretty well,” says Markus Winkelhock with the mischievous look on his face that is a hallmark of the family of racers he comes from. The sponsor he’s talking about is the men’s magazine Playboy. Its colors have been emblazoned on the cars in which the professional racer has been contesting the DTM for Audi since 2008. “In any event, it looks like I’m the only single guy in Audi’s driver squad at the moment...”

Katherine Legge’s views on this are anyone’s guess. The Briton who, like Winkelhock, will be 30 this summer and is tackling her third DTM season for Audi will now experience the cheeky Swabian at close quarters. This season she switched from Audi Sport Team Abt Sportsline to Audi Sport Team Rosberg. “This is a totally new task for me – and I’m fully motivated and better prepared in a sporting sense than ever before,” explains the Briton who lives in Switzerland. “Last year I learned a few sporting tricks of the trade from the Abt squad that’ll probably come in handy this year too.”

The straight-forward lady certainly has ambitions of being on a par with the Swabian “playboy” in the team: with words because her German language skills have reached a respectable level and at the wheel because the quick lady would like to continue last year’s pinnacle of her performances when she beat all the men on the lap chart at the Norisring race. And last but not least in terms of visibility because her Audi A4 DTM will again sport the colors of the women’s lifestyle magazine Glamour which makes it a real eye-catcher in the field. “This is exactly the right partner for me. I’m competing in a men’s world but don’t want to hide my femininity,” enthuses Legge who as the “Queen of pink” with her helmet and shoes is in perfect personal harmony with her sponsor’s colors.

The main focus, however, should be on the sporting ambitions of the two team-mates. A year ago, Markus Winkelhock completed Audi’s 1-2-3-4 wins at the Hockenheim season opener and at the Nürburgring in fourth place and thus just barely missed his first DTM podium finish. “Of course a lot depends on the rating of the year-old cars which hasn’t been issued yet,” he emphasizes. “But the main thing for me is to clinch the best possible single results. And of course I’d like to mount the podium and take a trophy home for a change.”

Both drivers are well aware of the fact that the colleague in their own team is the primary benchmark for any comparison. “I look forward to this because last year I didn’t have any team-mates who drove a car from the same year as I did,” says Legge. Her team colleague knows that her friendly nature nature does not reveal the tough racer she is. “You’ve got to respect her, and I definitely do,” declares Winkelhock. “Katherine has shown that she’s determined and able to stand her ground in DTM duels. It’ll be a nice season.”

Since Katherine Legge has known Markus Winkelhock as a brand colleague for as many as two years now she knows what to expect – at least for the most part. “Of course, before the season, I won’t let anyone in on the best practical jokes I’m going to play on her off the track,” says the Swabian with a grin on his face. “But I do get along well with her. Here’s just one tip: she’d better not be faster on the track than I!”