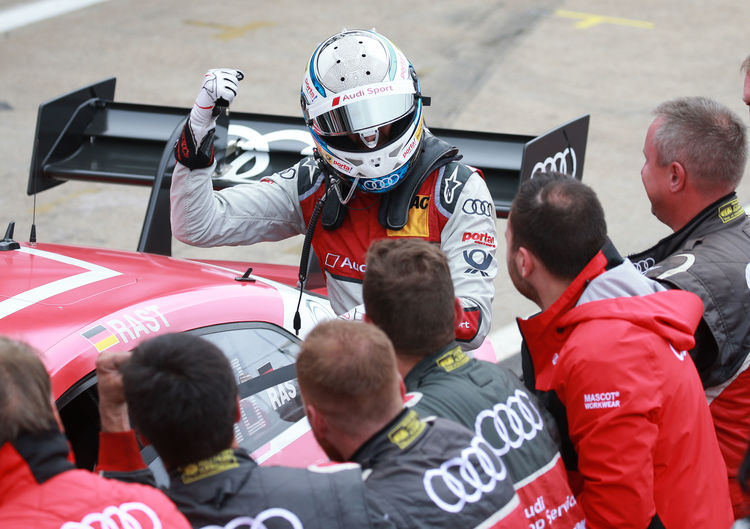 With two top results to his name, René Rast stood out from the Audi team during the DTM event at Brands Hatch. Mike Rockenfeller also scored points in both races. The quotes.

Dieter Gass (Head of Audi Motorsport)
“We are delighted to go home from Brands Hatch with a podium finish. It was fantastic to be here with the DTM and to race on the long Grand Prix circuit for the first time. Every driver enjoyed racing on this circuit. Unfortunately we failed to live up to expectations in qualifying on Saturday, otherwise more than fourth place would have been possible in the first race. On Sunday, René (Rast) could attack the two leading Mercedes-Benz even though it was a very long race for him after the early pit stop.”

René Rast (Audi Sport RS 5 DTM #33) 4th place / 3rd place
“That was a super event for me – fourth place on Saturday, third place on Sunday. But the points are somewhat secondary for us at the moment. It’s more important that we have found a level of performance with which we are satisfied. The victory in Zandvoort showed this. For this reason we are quietly confident that we can put something together in the forthcoming races even though the tracks in Misano and Spielberg are completely different again.”

Mike Rockenfeller (Schaeffler Audi RS 5 DTM #99) 10th place / 6th place
“I drove for the first time on the long circuit here in Brands Hatch. It wasn’t so easy for me to get used to the track’s peculiarities. Both qualifying sessions weren’t really very good. In both races I made up several place and scored points on both occasions. Around a circuit on which you can’t overtake very easily I just have to be satisfied with this.”

Nico Müller (Castrol EDGE Audi RS 5 DTM #51) 15th place / 10th place
“Although I didn’t know the track, the pace was there from the start. I like the Brands Hatch track – it was a lot of fun to drive. So it’s all the more frustrating that we didn’t score any good results. On Saturday I made a mistake in qualifying, in the race we didn’t have a good strategy. In the second race at least I scored a point. But this is of little consolation. It was definitely possible to come away with more.”

Jamie Green (Hoffmann Group Audi RS 5 DTM #53) 11th place / 15th place
“It was very disappointing to start from 17th on Saturday. A good race saw me nearly score points from the back of the field. On Saturday I moved up from eleventh on the grid to fourth. Due to a slow pit stop I dropped behind Wehrlein. When Wittmann wanted to overtake me on the straight I defended my position. I thought I had my nose in front, which is why I think the drive-through penalty a little harsh.”

Robin Frijns (Aral Ultimate Audi RS 5 DTM #4) 12th place / 12th place
“The weekend started exceptionally well with the best and second best times in the first two free practice sessions. In the first race we lost a lot of time at the pit stop. I had to fight my way forward again from almost the back of the field. I started the second race from a good sixth place before things turned sour due to a collision with Lucas Auer.”

Loïc Duval (Audi Sport RS 5 DTM #28) 18th place / 16th place
“I really like this old school track. It’s a real challenge for us drivers. I actually felt good in free practice. But in Saturday’s qualifying we didn’t find the best set-up, in the race I retired early. Sunday started much better with eighth on the grid. In the race it looked like a points finish for a long time – until the puncture.”

Thomas Biermaier (Team Boss Audi Sport Team Abt Sportsline)
“A whole lot more was definitely possible on this – at least for us – extremely disappointing weekend where Nico (Müller) scored just one point on Sunday. Robin (Frijns) in particular was very fast. On Saturday he was unlucky in qualifying, on Sunday the light collision with Lucas Auer on the opening lap destroyed his race. Unfortunately, Nico had two bad qualifying sessions, which are extremely important at this track.”

Ernst Moser (Teamchef Audi Sport Team Phoenix)
“It was possible to score points on both days with both cars. It worked for Mike (Rockenfeller), but for Loïc (Duval) unfortunately not. In the future we must try to qualify further forwards, then you can also achieve much more with an aggressive strategy. However, on the whole we see a clear upward trend. Congratulations to René (Rast) and his great result.”

Arno Zensen (Team Boss Audi Sport Team Rosberg)
“The long Brands Hatch circuit is just sensational – before I wasn’t so fond of the short track. From the sporting aspect we are generally satisfied. René (Rast) scored two fantastic results. Jamie (Green) just drove a very good race on Sunday. Unfortunately we botched his pit stop, which meant he got mixed up unnecessarily with the competition. However, it’s positive to see that Jamie is back to his old form.”