Comments after qualifying at Spa 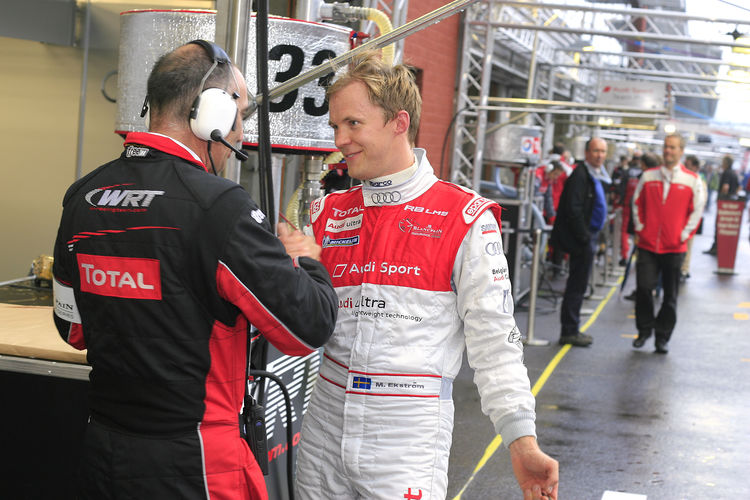 The best Audi R8 LMS starts the 24-hour race at Spa-Francorchamps from seventh on the grid on Saturday at 4 p.m. (CEST). The comments after qualifying.

Dr. Wolfgang Ullrich (Head of Audi Motorsport): “In this qualifying for the 24 hours of Spa it was important to find a free lap at the end because the session was repeatedly interrupted by red flags. Unfortunately we were not very happy with all the cars. The result doesn’t reflect the performance. We should be well positioned for the race.”

Mattias Ekström (Audi ultra R8 LMS #33)
“That was a very exciting qualifying format. There were three sessions, but in the end only the last one counted. We managed seventh place. This is okay for a 24-hour race. Obviously we always tried to fight for the best possible position. We managed this in the rain; we still want to improve in the dry. I’m very satisfied. Audi Sport Team WRT worked fantastically well. I’m really impressed up to now. If we can continue to work like this for 24 hours we have a good chance of an excellent result.”

Greg Franchi (Audi ultra R8 LMS #33)
“We were right at the front in the first to qualifying sessions. In the dry Mattias (Ekström) tried to find a clear lap. Unfortunately without any luck! Otherwise a position in the top three would have been possible. Now we start the race from a position in the top ten, which is important. We now concentrate on a very long race in which we aim to move much further forward.”

Timo Scheider (Audi ultra R8 LMS #33)
“Mattias (Ekström) was very fast in the wet in first qualifying. He lapped six tenths quicker than the next car. It was very impressive. Everything went according to plan. We did the job we had to do to qualify. In the end it was a question of managing the time to find a clear lap, we were unlucky while attempting this at the beginning. From way back we managed to move up to seventh. For a 24-hour race this is a grid position we can live with.”

Marcel Fässler (Audi Top Service R8 LMS #98)
“It goes without saying that we’d much rather be further up the grid. But it wasn’t so easy today: the track dried out towards the end and obviously everybody wanted to go out again, which makes it difficult to find a clear lap. Now we are tenth which isn’t dramatic. I’m confident because our R8 LMS has run without problems up to now and we are a strong trio.”

Andrea Piccini (Audi Top Service R8 LMS #98)
“I think we were very good in all conditions. We were just a little unlucky at the end. Marcel (Fässler) set a very good time at the start of the first session. Second qualifying was also good. In third qualifying in the damp we were always in the top five. Just the timing was a little unlucky at the end. We didn’t manage two consecutive clear laps and couldn’t use the tires so well as a result. The position doesn’t show our potential. However, the car is good and the team is strong. I’m looking forward to the race.”

Mike Rockenfeller (Audi Top Service R8 LMS #98)
“Our car was very good to drive in the changing conditions at the end of third qualifying. We were in the leading group for a long time until the final red flag. In view of the long pit lane here at Spa-Francorchamps it was difficult to decide exactly when to go onto the track in order to have no traffic in the remaining 5 minute 30 seconds. Unfortunately I was held up slightly – enough to prevent me from improving. It’s a shame as I think that we could have taken pole position. However, it’s a 24-hour race and all three of us are ready. I think we’ll show that we are better than tenth place on Saturday and Sunday.”

Marc Basseng (Audi Sport performance cars R8 LMS #99)
“It was extremely interesting today to see just who set the best time in the difficult conditions in the last laps. I encountered traffic at Eau Rouge, was too long on the wet part of the track and didn’t get the corner right which is why a better time wasn’t possible. Obviously I’m a little disappointed but I know that it’s still an acceptable starting position for a 24-hour race.”

Christopher Haase (Audi Sport performance cars R8 LMS #99)
“We had the opportunity to fight for pole position in all three sessions. We made the wrong choice in the first session with slicks, but were able to improve in the second session despite the worse conditions. It was a tough task in the third session, because it was all about finding a clear lap and having the pace at the end on the drying track. Respect to my team mate Marc Basseng. I think we can be satisfied with our grid position. P13 for our car and P10 for the sister car are good starting positions – after all, the 24-hour race is long.”

Frank Stippler (Audi Sport performance cars R8 LMS #99)
“To summarize: in qualifying at Spa I completed plenty of kilometers on slicks on a wet track. Qualifying was a lottery at the end. Who was when on the track, how heavy was the traffic, what tire temperatures could you generate? Positions ten and 13 are not bad grid positions; even though we’d much rather have been further forward.”

Filipe Albuquerque (Audi ultra R8 LMS #32)
“Unfortunately I had an accident in qualifying on the drying track. I was on slicks on my second fast lap. It wasn’t easy to see the wet parts in the night. Unfortunately the rear snap away as I braked for the first corner at the same point as I had on the previous lap. My car oversteered and I spun off to the left. The wall is closer to the track at exactly this point and I smashed into the barrier.”

Bert Longin (Audi ultra R8 LMS #32)
“We’d done a good job before the incident. We worked through our program calmly and concentrated and had the chance to qualify in the top three. However, such an accident is part of motorsport. These things can happen.”

Stéphane Ortelli (Audi ultra R8 LMS #32)
“In French we say ‘C’est la vie’ – that’s life. Unfortunately we lost the chance of a better grid position due to my team mate Filipe Albuquerque’s spin. It’s not the end of the world. We shouldn’t forget that we had already found a good base for the race and tomorrow we have the opportunity to prepare thoroughly for it. I’m looking forward to the race and that I can drive one of the best cars around one of the world’s most beautiful circuits. The first points are awarded after six hours – beforehand there’s plenty of time to make up places.”

Ernst Moser (Team Boss Audi Sport Team Phoenix): “That was mixed day. We were always up at the front in the wet sessions and with ten minutes to go in final qualifying we were still in the leading group. The red flags at the end made life difficult for us: every time we went out we got stuck in the traffic from the lower pits. And as soon as we’d escaped the next interruption came. We are a little disappointed because a position on the first or second row would have been possible. However, the race is long so let’s wait and see where we are after a few hours – the qualifying is quickly forgotten.”

Vincent Vosse (Team Boss Audi Sport Team WRT): “It was certainly a good qualifying. Not directly for our team but for the spectators who followed with great interest who had their nose in front at the end. The grid was quiet literally decided on the last lap. We’ll now concentrate on race preparation and use tomorrow to set-up as well as possible for the 24-hour race.”