{{ activeItem() }}
Twitter
08/09/20
“A lot that we can look forward to for the final two races of the ‘Berlin Six,’” says Audi Sport ABT Schaeffler Tea… https://t.co/B0TEWWNrod
08/09/20
Our position with @LucasdiGrassi in the fight to become the runner-up in the drivers’ championship. &gt;&gt;… https://t.co/OV8Tgw7n1x
08/09/20
Our positions in the @FIAFormulaE team’s standings with two races left in season 6, from August 12–13. &gt;&gt;… https://t.co/JMddfFS8Ym
08/09/20
MEDIAINFO: Audi driver di Grassi also scores points in fourth race of Formula E finale &gt;&gt; https://t.co/gR0G8TbpFu… https://t.co/VbJwwd3Yyv
Audi Sport on Twitter
{{ activeItem() }}
Facebook
08/03/20
What a start to the DTM season it was for Nico Mueller! Race victory and he is currently leading the drivers’ standings. See how he experienced the weekend in his latest #DriversDiary. >> audi.com/DTM #PerformanceIsAnAttitude #ThanksToDTM
08/03/20
Fourth victory for the Audi R8 LMS in just two weeks, adding to podiums and victories for the Audi R8 LMS GT4 and Audi RS 3 LMS this past weekend. 🇩🇪 🇮🇹 🇺🇸 🇫🇷 >> audi.com/GT3 >> audi.com/GT4 >> audi.com/TCR #PerformanceIsAnAttitude
08/02/20
Another podium lockout for us today! Check out how the second race at Circuit de Spa-Francorchamps has unfolded. >> audi.com/DTM #PerformanceIsAnAttitude #ThanksToDTM
08/02/20
Leading the pack. >> audi.com/DTM #PerformanceIsAnAttitude #ThanksToDTM
Audi Sport on Facebook 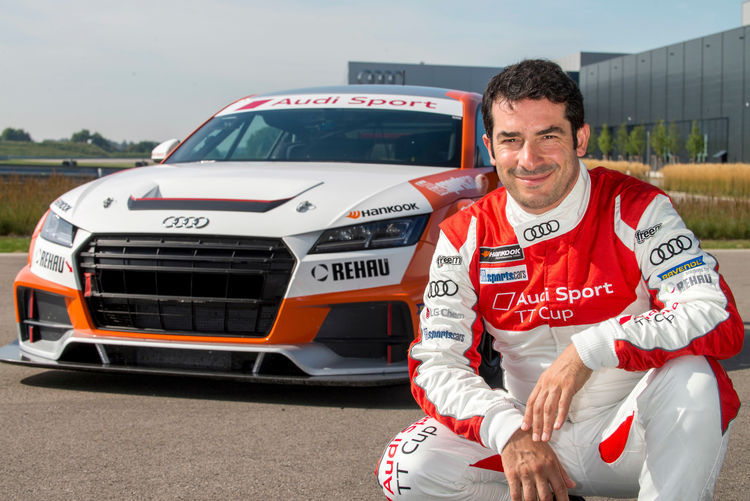 The summer vacation period is about to end in most German federal states, and in the Audi Sport TT Cup, the eight-week summer break will be over next weekend. The international junior talents will be back on track. At the Nürburgring, as part of the DTM’s supporting program, a race of the Audi one-make cup will be held on each Saturday, September 10, and Sunday, September 11.

The band begins to play again for the 16 permanent entrants in the Audi Sport TT Cup. The fifth of seven race weekends is coming up at the Nürburgring. In the Eifel, the talents aim to prove that they made good use of the summer break and meticulously prepared for their next racing commitment. The Audi one-make cup previously visited the tradition-steeped track at the end of May as part of the supporting program for the 24-hour race. Now the junior campaigners will be there as part of the DTM. “At the Nürburgring, the drivers from the Audi Sport TT Cup delivered a number of gripping races before, and I’m sure they’ll do so again this time,” says Project Leader Philipp Mondelaers.

Dennis Marschall is traveling to the Eifel as the overall leader with a seven-point advantage over rookie Sheldon van der Linde (ZA). In a total of four of his races in the Audi Sport TT Cup at the Nürburgring, the German has come in at least second place. In May, Marschall and van der Linde each triumphed in one of the two races. “The battle for the top spot is tough but always fair,” says Chris Reinke, Head of Audi Sport customer racing. “The remainder of the drivers’ field has always seen very close finishes in the season’s eight races as well. That’s the way we like it.”

In the guest entrants’ classification, two high-caliber contenders will be pitted against each other at the Nürburgring. Actor Tayfun Baydar (D) is known for playing the part of Tayfun Badak in the RTL television series ‘Gute Zeiten, schlechte Zeiten’ (‘Good Times, Bad Times’) (GZSZ). The 41-year-old played this character in the RTL soap from 2008 up until the summer of 2016. Baydar will be battling Benedikt Mayr (D). The freestyle skier started out in alpine skiing as a three-year-old and in 2008 and 2010 was ‘Freeskier of the Year.’ The 27-year-old participated in the Winter Olympics in Sochi in 2014 and is currently tackling a new challenge. Since September 3, Mayr has been battling for victory in the RTL dance show ‘Dance, Dance, Dance.’

The race weekend at the Nürburgring will start on Friday, September 9, with free practice beginning at 15:50. On Saturday, qualifying will start at 11:30, followed by the first 30-minute race at 18:10. Round two, held for a maximum of half an hour as well, will begin on Sunday at 08:50.

Both races will be broadcast on the web by live streaming at www.audimedia.tvand via the SmartTV app ‘Audi MediaTV.’ As a result, spectators around the globe will be able to watch the Audi Sport TT Cup live via Samsung, LG, Amazon Fire and Android TV on television screens. SPORT1 will be airing coverage of the rounds on Saturday starting at 23:00 and on Sunday starting at 17:45 on Free-to-Air TV. Live coverage of race two on Sunday will be provided by Pay-per-View TV channel SPORT1+ starting at 08:45.