Back to the Future

Recycling is premium. In a 1-year pilot project we are investigating whether car glass that comes from our customers’ car windows, can be recycled in such a way that it can be used as a valuable material for the series production of new vehicles. Watch the video to see exactly how the process for this pilot program is done. Using damaged glass, we are turning it into new windowpanes. But how exactly does it work? The pilot project uses an innovative recycling process in which older car windows are broken into small pieces and then – freed from non-glass impurities such as adhesive residues – are melted down to make new glass sheets which then will be used for new car windows. For this premium recycling project, we partnered with Reiling Glas Recycling (@Reiling Unternehmensgruppe), Saint-Gobain Glass (@SaintGobainTV) and Saint-Gobain Sekurit (@Saint Gobain Sekurit TV). If the pioneering work succeeds, the plate glass will return as a news car window in the Audi Q4 e-tron series. More information: https://www.audi.com/en/company/sustainability/core-topics/value-creation-and-production/closed-circuit-recycled-automobile-glass.html
YouTube 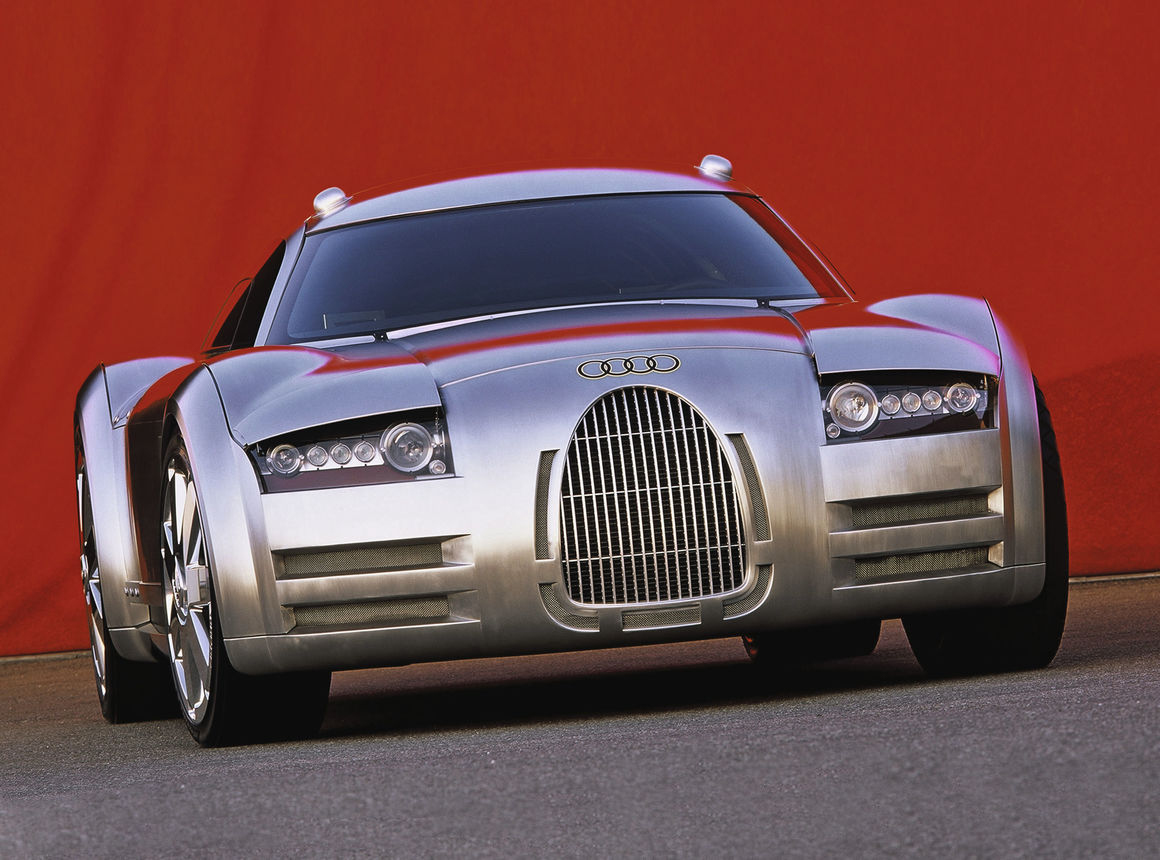 The ?Autostadt? in Wolfsburg ? Audi?s pavilion is in darkness. Then the spotlights come on and a car appears that is surely not of this world ? at least, that?s the first impression it creates. Crouched low, as if waiting to spring. A concentrated package of abounding energy and precise geometry. Flowing, aerodynamic lines with the clarity that goes hand in hand with pure functional efficiency.

A second glance, and familiar features begin to appear: the massive radiator grille at once recalls the historic Auto Union ?Silver Arrow? racing cars, and so does the long engine cover falling away to the rear, with its vertical air inlet slots. Just like the historic ?Silver Arrow? cars too, the gleaming matt finish body with its brushed aluminium surface catches the light and conjures up an almost magical aura.

One thing is immediately clear: like the famous ?Silver Arrows?, this low-built coupé could also be powered by a 16-cylinder mid-engine. There is plenty of space between the giant wheels in their high upward-curving wheel arches. A long wheelbase which creates space for two occupants and for a large-capacity engine in front of the rear axle.

Short overhangs seemingly hewn from the solid emphasise these proportions and give the side view its special power and presence. A large-capacity engine with sixteen cylinders ? and suddenly the onlooker recalls: this was just the number that the Auto Union racing and record-breaking cars of the nineteen-thirties also had. Racing cars which legendary drivers such as Bernd Rosemeyer and Tazio Nuvolari steered from victory to victory.

Tradition and heritage are of course not the only telling factors when one first encounters this incredible car below the roof of the Audi pavilion. Its clearly defined outlines, with domed roof, precisely semi-circular wheel arch cutouts and high waistline ? they all echo Audi?s current design philosophy, the relationship with the TT, recipient of so many design awards.

This latest creation from the Audi Design team is the ultimate highlight in the brand presentation at the ?Autostadt?. It spans the gap between past and present, between tradition and vision, and continues the line from the past to the present of the brand, its philosophy and its design culture, and on into the future. Its design is not content with quotation and variation, but instead extracts new qualities from historical tradition.

Audi?s design study at the ?Autostadt? in Wolfsburg is not a prototype ready to be driven, nor has it been created in anticipation of a production vehicle. But this vehicle visualises the technological potential of the Audi brand. Lightweight design, the ultimate dynamism and functional precision characterise the line of every detail, of every component.

At the very first glance we can see the large-diameter drilled brake discs behind the giant wheels. They are the logical counterpart to the performance of the undoubtedly powerful mid-engine.

Audi?s quattro permanent four-wheel drive would unquestionably provide it with the perfect basis for converting the power of a large engine into propulsion, to make an ultimate sports car study such as this eligible for the title of ?perfect driving machine?.

Boldly shaped air inlets are a formal element at all points on the aluminium body of this Audi design study, and nowhere more so than at the front. The headlight units in the aerodynamically shaped nose seem to focus resolutely on the road: compact, powerful xenon headlights shine behind clear glass covers. The flat lights are protected behind flush-fitting metal panels that slide upwards when the headlights are switched on.

Large outside mirrors are difficult to accept for the aerodynamics engineer bent on perfection. For a perfect view of events behind the Audi design study, it therefore foresees several cameras that project rear and side views on to monitor screens in the cockpit.

Inside a super sports model: clarity as a blend of elegance and functional efficiency has been sought and found here too. The interior is trimmed with fire-resistant quilted Nomex like a racing car or helicopter cockpit. Two leather-covered bucket seats accommodate the driver and passenger behind a panoramic windscreen that is wrapped well round. This is the logical continuation of the purist interior architecture found in the TT cockpit.

The prominent centre tunnel with its polished aluminium tubes and the high window line integrate the position of the driver into the car in an ergonomically perfect manner, making him the nerve-centre of this super sports car. A workplace at the centre of a driving machine.

A window at the rear of the cockpit provides a clear view of this car?s powerful heart, the mid-engine. An enormous analog tachometer gives its pulse reading. Like the other instruments, its design picks up the aesthetic theme of the light units.

Adjustable racing pedals, an open lever gate for the six-speed gearbox and a steering wheel with four spokes at 90-degree intervals are the ideal instruments for the driver to keep the performance potential of this car under perfect control.

Brushed aluminium, carbon fibre and leather of the highest quality define the character of the interior that retains its clear purity with no concession to the ambience of a luxury saloon car. Precision craftsmanship can be found throughout: it has left its unmistakable mark of perfection on every material and every detail.

To produce an Audi such as has never been seen before.