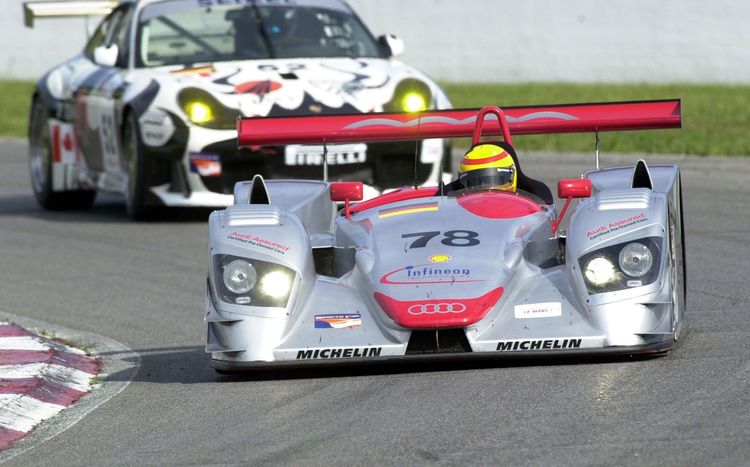 Audi driver Frank Biela qualified on pole position for the sixth round of the American Le Mans Series (ALMS) in a thrilling qualifying at Mosport, Canada. During the final session the fastest Panoz had set the provisional Pole time before Biela went even faster shortly before the end of the session. Thanks to this effort the latest generation Audi R8 maintained his perfect qualifying record: After qualifying on pole position for Sebring, Le Mans, Nürburgring and Sears Point the 610 hp sports car took its fifth pole position in its fifth race.

Also Rinaldo Capello improved his time with the other Audi R8. The Italian missed a place on the front row by just 0.032 seconds.

The race at Mosport runs over a distance of 2:45 hours and starts on Sunday at 1 pm local time.

Frank Biela (No. 78): „When I heard on the radio that I´m no longer on pole position I attacked again. The car was handling very well and my third lap was clear and good. I am very content having qualified on pole position.”

Emanuele Pirro (No. 78): „We have sorted out the problems we had with our car at Sears Point. I am very optimistic for the race, but I hope it´s not going to rain. You would´nt even wish rain on your worst enemy on this track.”

Rinaldo Capello (No. 77): „After my first trial I switched the tyres on the left side with the tyres on the right side. Unfortunately the handling was affected badly by this. Despite that I was on a very fast lap when I made a little mistake. Otherwise I definetly would have been able to move onto the front row.”

Allan McNish (No. 77): „Qualifying has shown that the American Le Mans Series is very competitive. We have got the first three cars covered by one tenth of a second. The car has a very good balance, but we know there is a very big fight ahead of us tomorrow.”

Dr Wolfgang Ullrich, Head of Audi Sport: „It has happened what I expected: Panoz went a lot quicker and one of them was even able to split our two cars. It will be no easy job to get by the Panoz as overtaking is extremely difficult here.”

Reinhold Joest, Team Director Audi Sport North America: „It is our philosophy to alternate from race to race who is going to qualify our cars. This is good for their motivation. I am especially pleased that Frank took the pole position.”