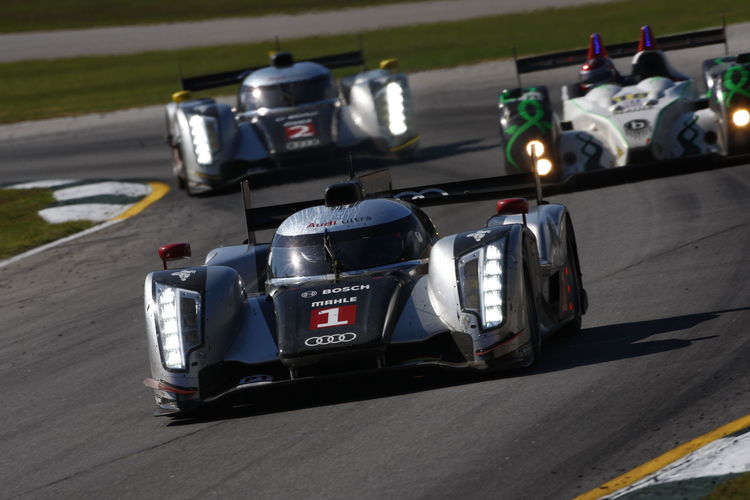 Audi Sport Team Joest will tackle the 1000-mile “Petit Le Mans” race at Road Atlanta (U.S. state of Georgia) from the front row of the grid. Timo Bernhard was merely 128 thousandths of a second short of clinching the pole position. This means that the Audi R18 TDI will be on the front row again at its fifth race.

Qualifying on the 4.088-kilometer track at Road Atlanta was a mirror image of the previous practice sessions: The world’s fastest diesel race sports cars from Audi and Peugeot had constantly been taking turns at the front of the record field of entrants. Three fastest times went to Audi and two to Peugeot.

The chase for times was similarly thrilling on Friday afternoon. First, the Peugeot drivers posted the so far fastest laps of the whole week. Then Audi countered: Timo Bernhard in the Audi R18 TDI designated as car number “1” managed to get between the two factory Peugeot cars and secured position two on the grid for Audi.

Dindo Capello in the “sister car” – number “2” – was on a fast lap as well when he caught a slower prototype, losing crucial time in the process. The Italian finished the qualifying session on position four.

In Sunday’s race doing a good job of getting through the extremely heavy traffic on the track will be more crucial than pure speed. 57 vehicles will be on the track at Road Atlanta. Consequently, the fast LMP1 sports cars have to constantly overtake and drive alongside the racing line. Therefore, Audi Sport Team Joest fully concentrated on working out an optimum race set-up during the practice sessions.

For race day the organizers at Road Atlanta are expecting a record turnout. After an extremely hot week in Georgia the weather forecast has predicted slightly cooler temperatures. The race will start 11:30 local time (17:30 CEST) and covers a distance of 1000 miles or a maximum of ten hours.

Dr. Wolfgang Ullrich (Head of Audi Motorsport): “In the past few days the gaps between us and our main rival, Peugeot, became smaller and smaller. In qualifying the difference was merely a tenth of a second. We’ve put one of our cars on the front row. There was just a tiny bit missing, but we all know that that’s not crucial for the outcome of the race here. But it’s good to see that we’re on an equal footing in terms of performance capability. That’s a good base for the race.”

Timo Bernhard (Audi R18 TDI #1): “I’m really pleased. Two weeks ago, at Silverstone, I also drove the qualifying session but we were a bit unfortunate with the weather conditions. That’s why I wanted to drive in qualifying again – either here at Road Atlanta or at the ILMC finale at Zhuhai. I managed a good lap; it was at the limit from the beginning to the end. I’m happy that Marcel (Fässer) will be starting from the front row in our car tomorrow – and very much look forward to the 1000 miles.”

Romain Dumas (Audi R18 TDI #1): “It was a very close qualifying session. Even in the previous sessions the top cars were constantly taking turns at the top and were always within fractions of a second. Qualifying has shown that things are continuing this way. The race will be equally crazy. It’ll be about getting through without making mistakes. Qualifying isn’t crucial but it has shown that we’ve got a car with a good set-up.”

Marcel Fässler (Audi R18 TDI #1): “For the moment we’re very happy because we’ve continuously made progress from one session to the next. We’ve found a good set-up that all three of us can handle well. So it seems like we’ve taken the right approach, as Timo (Bernhard) did a fantastic job of driving in qualifying and posted a really good time. It shows that our car is competitive.”

Dindo Capello (Audi R18 TDI #2): “All in all, qualifying went well. I was happy with the car. Unfortunately, I had some traffic on the first few laps. I then deliberately dropped back a bit in order to have a gap in front of me. Afterward I must have wanted too much and overdrove the car a bit. That cost a few tenths of seconds. Still, we’re pleased. It’s important to be fast in the race, and particularly in traffic. That’s what we’ve been working on over the past two days.”

Tom Kristensen (Audi R18 TDI #2): “Petit Le Mans 2011 promises to become an incredibly captivating race. We’re in for a lot of heavy traffic. It’ll be a truly thrilling battle on this challenging track. If you apply the number of cars here to the length of the Le Mans track, then that equates to a field of 270 cars. That shows what we can expect in the race. Tomorrow will be a strenuous day. In addition, the track conditions will slightly change because the outside temperatures will drop from almost 30 to about 20 degrees centigrade, according to the forecast.”

Allan McNish (Audi R18 TDI #2): “With almost 60 cars on the track, Petit Le Mans is real stress. In the practice sessions we fully concentrated on developing the optimum set-up for the race. Tom (Kristensen) was very happy with the car in the night practice session. He’ll drive the start tomorrow, which is in an important factor. Dindo (Capello) was also fast all the time. As far as I’m concerned, I’ve felt very comfortable with the car’s set-up right from the beginning. Balance is good. That’s important for the race.”

Ralf Jüttner (Technical Director Audi Sport Team Joest): “We knew that the situation would be difficult for us in qualifying. Things have been tight all weekend. However, due to the heavy traffic it was hard to really judge the performance capabilities without. We’re pleased with the result because the time posted by Timo (Bernhard) is very good. It’s even faster than we’d expected. Dindo (Capello) did a lap that would have been good enough for third place. Unfortunately, he had some traffic in turn five. It’s more important though that we’ve been doing a good job with the cars up to this point and that they’re doing well in traffic. The squad has been working hard over the past few nights and that has paid off. We’re in a good position. It’ll probably be a thrilling race.”