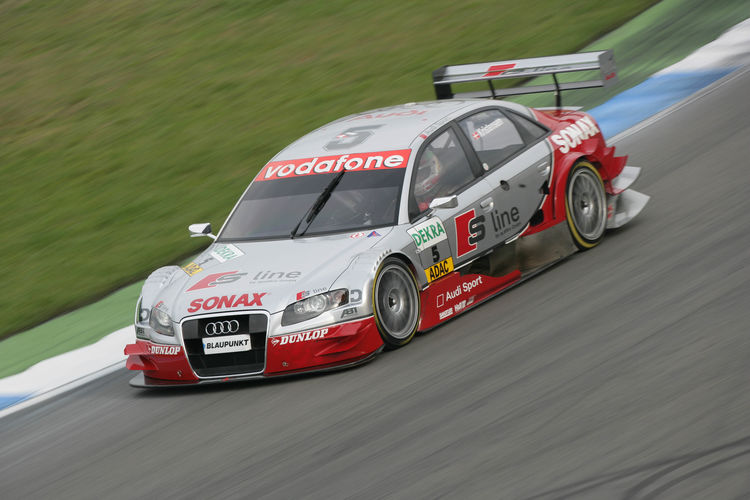 At the DTM finale at Hockenheim, Le Mans record winner Tom Kristensen, in his Audi A4 DTM, will start from the front row of the grid. In the Super Pole qualifying on Saturday, the Dane from Audi Sport Team Abt Sportsline missed clinching the pole position by merely 76 thousandths of a second. Frank Stippler achieved his best qualifying result in the DTM so far: in last year’s A4 of Audi Sport Team Joest the German claimed fifth place on the grid in difficult conditions. Title defender Mattias Ekström, on the other hand, failed to make it into the Super Pole for the first time in his DTM career: in qualifying, the Swede had to settle for 15th place.

In the morning’s free practice session Tom Kristensen, Mattias Ekström and Martin Tomczyk had taken the top three places on a dry track. Kristensen was twelve thousandths of a second quicker than the fastest time ever – clocked in spring of this year – to have been set by a DTM car. Yet rain showers before the start to the qualifying session resulted in completely changed conditions and a gamble with the set-up which had an unfortunate outcome for Mattias Ekström. A similar misfortune as the Swede was suffered by Allan McNish, Dindo Capello, Christian Abt and Pierre Kaffer, who will be starting the race from 16th, 17th, 18th and 19th place respectively.

In the Super Pole, Martin Tomczyk managed to clock the seventh-fastest time despite being the first driver to go out on the track. Frank Stippler and Tom Kristensen, as well, were able to improve their positions compared to the qualifying results.

The DTM finale at Hockenheim is scheduled to start at 2 p.m. (local time) on Sunday. ARD will broadcast live, starting at 1:45. A record turnout of spectators is expected at the circuit.

Tom Kristensen (Audi Sport Team Abt #5)
2nd place Super Pole, 1m 45.294s
“After we’d taken the top three places in this morning’s dry free practice, I’d of course been hoping for dry conditions in the qualifying as well. It was wet – still, we got along fine. For the Super Pole lap, it was tough to decide between wets and slicks. On rain tyres, I then drove a very slow warm-up lap to keep them from overheating. That worked well: In the first corner, the tyres were still a bit too cold, but in the ‘Motodrom’ I was the quickest because the tyres were still okay. My position on the first row is good, yet considering the small gap, I’d have preferred Pole...”

Frank Stippler (Audi Sport Team Joest #19)
5th place Super Pole, 1m 46.961s
“Things couldn’t have gone any better. After sliding into the gravel trap during the qualifying, my mechanics had to work pretty hard to clean the car again. Thanks a lot, boys! On the remaining two laps I still managed to clinch sixth place. Despite the fact that the track was drying off I was able to improve by one place over my rivals in the Super Pole. This was the best result that could be achieved in these conditions.”

Martin Tomczyk (Audi Sport Team Abt Sportsline #2)
7th place Super Pole, 1m 49.328s
“I’m satisfied with the result. But it could have been better, considering how much the track kept drying off later. It was just like at Brno, when I had the misfortune of having to go out first in the Super Pole as well. Yet seventh place on the grid isn’t all that bad, and I’m happy to have made it into the Super Pole again for a change.”

Mattias Ekström (Audi Sport Team Abt Sportsline #1)
15th place, 1m 51.003s
“This was the first time in the DTM that I wasn’t in the Super Pole. So we’re not only a little, but very, disappointed. Our philosophy with the set-up of the car didn’t work out, our work went in the wrong direction. Kimi Räikkönen won recently in Formula 1 from 17th place – so it may work from 15th place on the grid as well...Giving up is definitely the last thing we’re going to do here – even though the chances for victory are now obviously very, very, very small.”

Allan McNish (Audi Sport Team Abt #6)
16th place, 1m 51.020s
“The day had been off to a bad start with a gearbox problem in the free practice session. That’s why I got off the track and my car was damaged. The damage was more serious than we originally suspected. As a result, I had heavy oversteer. I had to pit twice, which is unusual in these conditions. Consequently, a better result just wasn’t possible.”

Dindo Capello (Audi Sport Team Joest #18)
17th place, 1m 51.173s
“The grip level wasn’t very high, so you had to be careful. In the first sector I drove the second-fastest time of all but in the slower sectors I lost too much time. Another tyre change made no sense, that’s why I just kept on driving through to the end.”

Christian Abt (Audi Sport Team Joest Racing #14)
18th place, 1m 51.358s
“I’m very disappointed. We simply do not deserve the positions on which we are now. The relatively big time differences have nothing to do with the performance of the drivers or the cars, but with the tyres. You have to use a very special approach with them. It’s a shame that this plays such a crucial role.”

Pierre Kaffer (Audi Sport Team Joest Racing #15)
19th place, 1m 51.578s
“In the free practice in wet conditions, I was pretty quick, that’s why I’m disappointed about the qualifying result. We had broken in a few good sets of tyres, and I used the best ones for the qualifying. Yet after two laps I had no more grip and just kept slipping and sliding.”

Hans-Jürgen Abt (Team Director Audi Sport Team Abt Sportsline): “We’ve got one car on the front row, that’s okay. The weather conditions just didn’t suit everyone equally well. Today, you had to make everything fit perfectly on a single lap, and that didn’t work out with Mattias (Ekström). But now we’ve got to live with the situation. The race isn’t until tomorrow, and we continue to be fully motivated to finish the season with a good performance.”

Ralf Jüttner (Technical Director Audi Sport Team Joest): “That was a superb performance by Frank Stippler, who made it into the Super Pole despite having gone off the track. And, what’s more, at a time when not many drivers managed to this any more. In the Super Pole he drove a perfect lap as well. We know that he is good at starting from the grid, that’s why we probably still have chances tomorrow. And our other three drivers will simply have to push forwards from positions that are further back.”

Dr Wolfgang Ullrich (Head of Audi Motorsport): “After this qualifying, we have mixed feelings: it was obvious that we made a mistake with the set-up of Mattias’s (Ekström) car. Tom (Kristensen), on the other hand, drove a good qualifying, and I take my hat off to Frank Stippler. Martin (Tomczyk), as well, showed a good performance in the Super Pole. Our goal for tomorrow remains the same: we want to achieve a good result at the end of the season. If it should be dry. we’ve got very good cars for this. Should it be raining, we learned a few more valuable lessons for that, today.“