Skip to content
We are using cookies for a better user experience.
03/29/19
Neuburg a. d. Donau
Sports

Links
{{ activeItem() }}
Twitter
07/12/20
Podium at the Green Hell: Audi Sport drivers @M_Bortolotti, @ChHaase and @m_winkelhock piloted the #32 Audi R8 LMS… https://t.co/dHtAwoydju
07/12/20
Front row at the @Nuerburgring: @phoenix_racing will start from 2nd on the grid for today’s 4-hr NLS @vln_de race.… https://t.co/mChoXgcX4P
07/12/20
Three weeks before the 2020 @DTM season gets underway at @circuitspa. Check out the official season preview video:… https://t.co/4YbscKXM26
07/11/20
SOUND ON: The Audi RS 5 DTM testing at @circuitspa. Have a great weekend! &gt;&gt; https://t.co/RoNVUt6n8i… https://t.co/VO6wvZw7yY
Audi Sport on Twitter
{{ activeItem() }}
Facebook
06/30/20
10 races with thrills, spills, banter and more: Looking back on the first season of the RCCO #RaceHome charity racing series with our DTM factory drivers competing for a good cause. #RaceHome #AudiTogether #etron #StayHome #PerformanceIsAnAttitude #RaceAtHome
06/29/20
From the virtual RCCO #RaceHome season finale, to picking up his new ride and racing at the Green Hell – a fun week for Nico Mueller in his latest #DriversDiary. >> audi.com/DTM >> audi.com/GT3 #RaceHome #AudiTogether #etron #StayHome #PerformanceIsAnAttitude #RaceAtHome -------------------- Audi RS 6 Avant: Combined fuel consumption in l/100 km: 11,7 (20.1) – 11,5 (20.5); combined CO2 emissions in g/km: 268 (431.3) – 263 (423.3); Information on fuel consumption and CO2 emissions as well as efficiency classes in ranges depending on the tires and alloy wheel rims used. // www.audi.com/dat
06/25/20
“That was the car I really loved to drive. I felt really confident in the new A4.” Together with Mattias Ekström, we’re looking back on the era of the Audi A4 DTM – the car that scored 5 DTM drivers’ titles for us. >> audi.com/DTM #PerformanceIsAnAttitude #AudiTogether
06/24/20
The first season of the RCCO #RaceHome charity racing series is in the books. Check out our race highlights and broadcast from WeatherTech Raceway Laguna Seca: >> bit.ly/2Vb03ww #RaceHome #AudiTogether #etron #StayHome #PerformanceIsAnAttitude #RaceAtHome
Audi Sport on Facebook 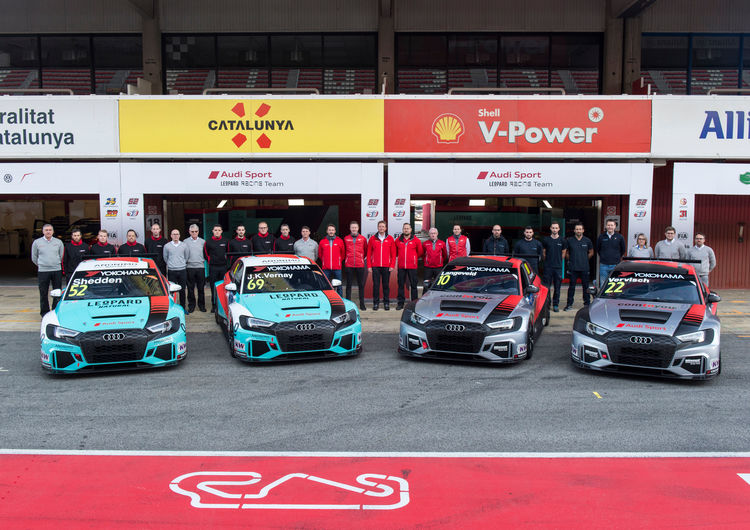 Curtain-up for the second season: The official pre-season test at Barcelona marks the conclusion of Audi Sport customer racing’s preparation for the 2019 WTCR – FIA World Touring Car Cup. The second season of the highest-ranking TCR racing series with new regulations, manufacturers and drivers promises even more suspense than the previous one.

“In 2018, we managed a strong inaugural season but this year we’ve set our sights even higher,” says Chris Reinke, Head of Audi Sport customer racing. “Our aim is to fight for the titles in both classifications with our teams and drivers.” Last year, Audi Sport was already among the best: At the end of the season, the tally reflected six victories, scored by the three Audi drivers Gordon Shedden, Jean-Karl Vernay and Frédéric Vervisch, and a total of 17 podium finishes. Three pole positions and six fastest race laps completed the track record of the year in which Jean-Karl Vernay kept his title chances open up until the finale. The 31-year-old Frenchman and his Scottish teammate Gordon Shedden are racing again for Leopard Racing Team Audi Sport this year. The Belgian Frédéric Vervisch from Comtoyou Team Audi Sport will have a new teammate –Dutchman Niels Langeveld. This means that for the first time Audi Sport has signed four drivers in the FIA WTCR. 31-year-old Langeveld in 2018 was the most successful privateer at the wheel of an Audi RS 3 LMS in the national ADAC TCR Germany racing series.

With the test at Barcelona on March 28 and 29, Audi concludes its pre-season preparations. The drivers completed a total distance of some 10,000 test kilometers in the Audi RS 3 LMS that was TCR Model of the Year in 2018. Since December, Audi Sport has tested in Belgium, Germany, Portugal, the Slovak Republic, Spain and Hungary. “After a good first season, we intend to fight for the title this year,” says Jean-Karl Vernay, who as the best Audi Sport driver won four races and clinched two pole positions last year. “The competition will be even more intensive and I’m really looking forward to that.” Seven marques and 26 entrants will be represented in the field. “As a team we worked very hard last year. Now I want to personally improve once again. Pole position and victory at Wuhan have made me hungry for more,” says Gordon Shedden. Frédéric Vervisch delivered several top performances last winter: In November, at the FIA WTCR finale in Macau, and in January, in Dubai, he won his first 24-hour race in the GT3 category with Audi Sport customer racing. “In 2018, I finished on podium in the FIA WTCR seven times. Now I intend to go for all-out attack right in the first race,” says Vervisch. “For me, the signing by Audi Sport has made a dream come true,” says Niels Langeveld. “We want to be in contention at the front of the field with the team and clinch good results. Is that realistic? I don’t know yet. But it definitely is my goal.”

The calendar covers three continents and again encompasses ten events, each featuring three sprint races, starting with the race at Marrakesh in Morocco next weekend. For the first time, a maximum of four race cars per manufacturer will be battling for success. The operational crews working on the cars will be limited to ten people per two race cars this year. Practice time in the first free practice session will increase by 50 percent to 45 minutes. For the first time, points will be awarded to the top five drivers not only in the second but also in the first qualifying session. The first qualifying will continue to determine the grid for race one, the second session for race three. In the second race, the top ten from the second qualifying will start from a reversed grid. The points-classification for all three rounds, which now begins with 25 points for a victory and no longer rewards only the top ten but the top 15 drivers, has been standardized. Titles in the WTCR – FIA World Touring Car Cup are awarded to the best drivers and teams, but not to the manufacturers. For the first time, the circuit at Sepang in Malaysia will host the finale of the racing series in December. Eurosport will provide comprehensive television coverage of the series in Europe. In 2018, 66 million viewers watched the broadcasts in Europe. The cumulative airtime of Eurosport alone amounted to 212 hours. This year, the series will be broadcast in 204 countries worldwide.