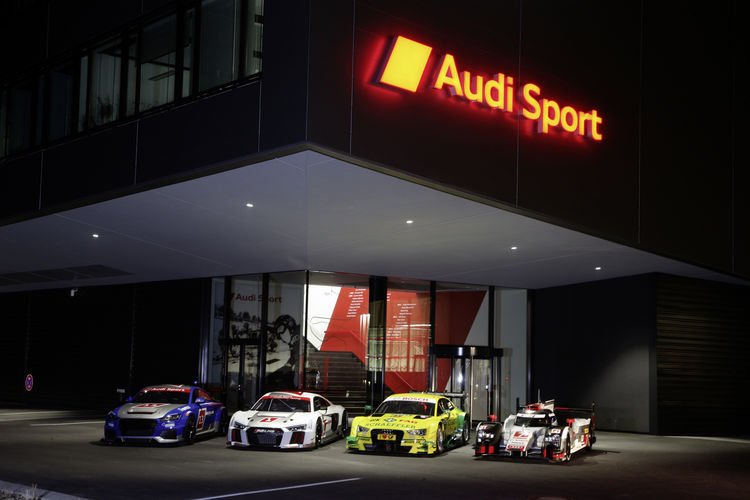 With a ‘warm-up’ at the Competence Center Motorsport in Neuburg, Audi Sport officially opened the 2015 motorsport season. On Thursday, about 70 members of international media from 12 nations including China and Russia, experienced an exclusive tour of the new racing department and the first joint appearance of the four Audi racing projects, LMP, DTM, GT racing and the Audi Sport TT Cup.

“We have a lot on our agenda for this year,” says Head of Audi Motorsport Dr. Wolfgang Ullrich with respect to the extended motorsport program of AUDI AG. “Here at the new Competence Center Motorsport in Neuburg we’ve created perfect prerequisites for this. We all feel comfortable in the new facilities. Particularly in the past weeks when the assembly of the race cars for the 2015 season began, the mechanics of Audi Sport and our partner teams came to appreciate the significance of optimum working conditions.”

For the Le Mans 24 Hours and the FIA World Endurance Championship (WEC), Audi Sport thoroughly revised the R18 e-tron quattro that was presented in its new design for the first time on Thursday in Neuburg. “We focused on various areas this year so that Audi’s hybrid sports car will remain unbeaten at Le Mans for the fourth consecutive year,” Chris Reinke, Head of LMP at Audi Sport, revealed.

Such profound modifications were not possible on the current Audi RS 5 DTM during the winter. “The car has been homologated since the third race of last season,” explains Dieter Gass, Head of  DTM at Audi Sport. “We concentrated on tapping existing potential and on paying attention to even the smallest detail.”

Two completely new race cars are available at Audi’s customer sport department that is expected to move from Ingolstadt to Neuburg as well immediately following the 24-hour race at the Nürburgring in May. “The response to our new Audi R8 LMS since its world debut in Geneva has been overwhelming,” says Romolo Liebchen, Head of Audi Sport customer racing. “Now we need to prove on the race track that it delivers on its visual promise.”

In the 24-hour races at the Nürburgring and at Spa-Francorchamps, Teams Phoenix Racing and WRT each will be fielding two new Audi R8 LMS cars. In the VLN Endurance Championship and in the Blancpain Endurance Series, Audi Sport customer racing is planning test runs as well.

Support within Audi’s GT program is awaiting the winner of the new Audi Sport TT Cup that will be celebrating its inaugural event as part of the DTM Festival at Hockenheim at the beginning of May. “We’re currently building five cars per week,” says Project Leader Rolf Michl. “Even before the first race, response to the Audi Sport TT Cup is overwhelming, and I’m convinced that we’re going to see tremendous races as well.”

While the completion of the total of 35 cars is the top priority in the Audi Sport TT Cup in the next few days the next on-track events are already on the agenda for the LMP, DTM and GT racing programs following the ‘Audi Sport Warm-up.’ The DTM will be testing at Estoril (Portugal) from March 25 to 27.  In the WEC, the Prologue at Le Castellet (France) is coming up on March 27 and 28 and the new Audi R8 LMS will be celebrating its racing debut at the VLN opener on the Nürburgring-Nordschleife on March 28.