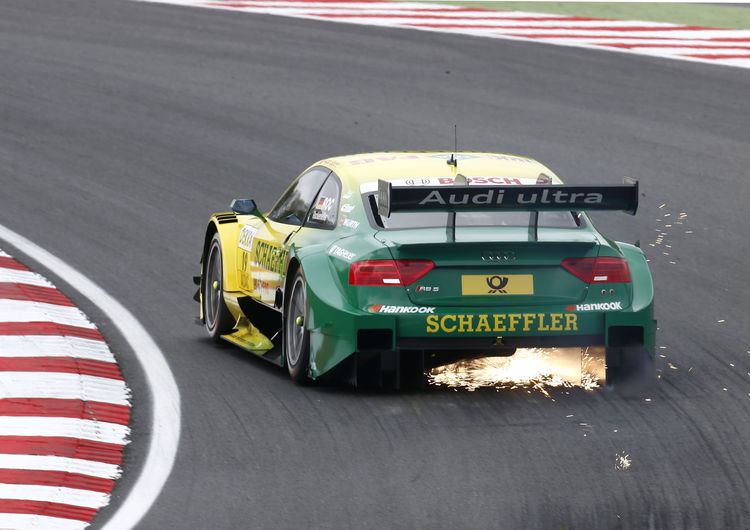 Just like in the season opener at Hockenheim, an Audi RS 5 DTM will again be starting from the front row at the second race of the 2013 DTM season at Brands Hatch (Great Britain).

Mike Rockenfeller in the Schaeffler Audi RS 5 DTM of Audi Sport Team Phoenix missed the pole position on the short, 1.929-kilometer race track on the outskirts of London by only 0.035 seconds. After his pole position in the 2011 season and grid position four last year, the 2010 Le Mans winner is thus entering the British DTM round as the best Audi driver for the third time in succession.

“In view of the narrow time gaps, this morning I was still saying that anything’s possible: the front or the last row on the grid,” commented Mike Rockenfeller. “Fortunately, it turned out to be the front row – that’s good. Naturally, I’d have liked to be on pole but I’m going to try and turn this around tomorrow, to win the start and to finish the race in first place as well.”

In the morning’s free practice, in which the entire field had been running within less than six tenths of a second, the German had been the second-quickest. In each of the four qualifying segments, he posted fastest times right in the beginning and was one of the few drivers to make it into Q2 on just one set of tires. In the crucial fourth section, ‘Rocky’ was only bumped to position two by BMW driver Martin Tomczyk at the very end.

In total, four Audi RS 5 DTM cars will be on the first five rows on Sunday. Timo Scheider (AUTO TEST Audi RS 5 DTM/Audi Sport Team Abt Sportsline) missed the leap into Q4 in sixth place by a razor-thin margin of 15 thousandths of a second. Edoardo Mortara (Playboy Audi RS 5 DTM/Audi Sport Team Rosberg) in Q3, after two strong first sectors, made a mistake in the finish turn and had to settle for grid position nine. On his favorite track, Miguel Molina, in Q2, set the day’s best time of 41.085 seconds, which he subsequently did not achieve again himself though. On Sunday, the Spaniard will be starting the race alongside Mortara from the fifth row of the grid.

Mattias Ekström took 13th place after having lost valuable time in the pits during the morning’s free practice session on account of damage to the front splitter of his Red Bull Audi RS 5 DTM and was no longer able to find a clean lap in Q2. Adrien Tambay damaged his Audi RS 5 DTM, which had been completely rebuilt after the fire at Hockenheim, by slipping in Q1. The Frenchman will start from position 16.

Extreme misfortune was suffered by Jamie Green (Red Bull Audi RS 5 DTM). At his home race, the Briton was eliminated in 18th place right in Q1, after having been obstructed twice by rivals and being able to tackle his last lap, that would have moved him forward to sixth place, only a tenth of a second after the checkered flag was dropped. Filipe Albuquerque in the Audi Financial Services RS 5 DTM will start from position 19.

“That was a typical Brands Hatch qualifying session with extremely narrow time gaps,” said Dieter Gass, Head of DTM at Audi Sport. “Mike (Rockenfeller) was very strong today right from the beginning and only missed the pole position by 35 thousandths. Obviously, we’d be happier if we’d have taken pole as we did at Hockenheim. But on the whole, we’re not unhappy with four of our cars being on the five front rows of the grid. Tomorrow, we’ll be in for a long race with 98 laps in which anything’s possible.”