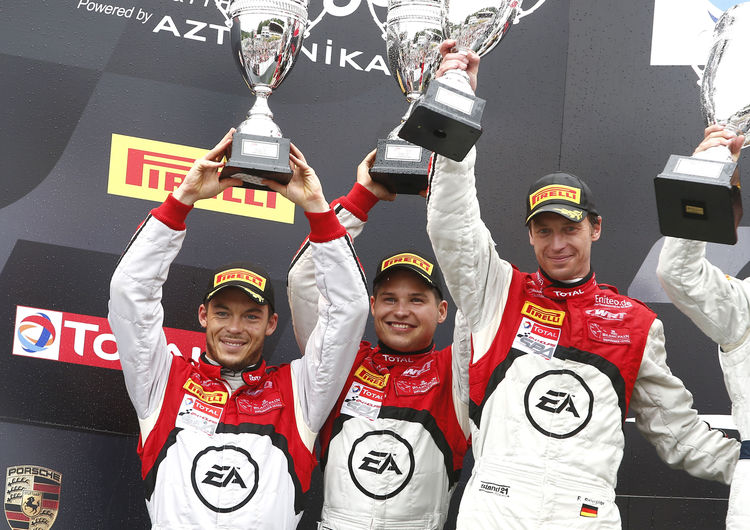 At the Spa 24 Hours, the Audi customer teams had set their sights on the aim of battling for the third victory in succession at the most important GT3 endurance race. In the end, third place was achieved. The current regulations drastically slowed the Audi R8 LMS which, with a tally of 18 titles, has been very successful. As early as in qualifying, grid positions 20, 27, 30, 31, 32, 35 and 53 made this clearly evident. Even Audi’s top driver team had no chance. They as well as their team colleagues regularly lost around one second per lap to their rivals right in the first fast sector of the 7.004-kilometer track.

Third place for André Lotterer/Christopher Mies/Frank Stippler (D/D/D), following a nearly flawless drive of the best Audi R8 LMS ultra at Spa was an outstanding result. A puncture during the night was the only irregularity in the first 18 hours of the race. After three quarters of the distance, the GT3 sports car with red diamond graphics was running in third place – albeit with a four-lap gap. “Due to the current balance of performance our teams were clearly unable to keep the race pace at the front,” analyzed Head of Audi Motorsport Dr. Wolfgang Ullrich. “We were lapped several times, which shows how big the differences due to the regulations were in the field. If even our last year’s Spa winner Frank Stippler, Blancpain Endurance Champion Christopher Mies, DTM Champion Mattias Ekström and our two-time Le Mans winners André Lotterer and Marcel Fässler were chanceless in this race, this leaves no doubts. To compensate, our drivers had to take a very high risk. As in 2011 and 2012, Audi’s customers would have liked to have battled for victory again but that was impossible this time. This is very regrettable as the world’s biggest GT3 race certainly would have deserved a more intense competition of all nine brands.”

With a six-lap gap, the red R8 of the Belgian Audi Club Team WRT ultimately reached the podium. The second-best Audi in the field was provided by Team Phoenix Racing. Christopher Haase (D), Oliver Jarvis (GB) and Harold Primat (CH) showed a consistent performance. Due to a brilliant team performance they advanced all the way to fourth place in the reliable Audi R8 LMS ultra. Since the seventh hour of the race the trio had been defending its position among the top ten in the field of the 65 entrants. The second Phoenix car that was shared by Enzo Ide (B), Anthony Kumpen (B) and Markus Winkelhock (D) was struck by misfortune. In the 20th hour of the race, the number 16 R8 LMS ultra retired after an accident by Enzo Ide.

At the beginning of the race, car number 1 set the pace among the Audi customer teams. While running in fifth place, Stéphane Ortelli (MC) was unable to start his race car again at the beginning of the fourth hour of the race after a pit stop. The exchange of a defective starter relay cost the Belgian Audi Club Team WRT five laps. When a transmission problem occurred just shortly afterward, the team chose not to continue the race. The time loss had already caused Ortelli and his team-mates René Rast (D) and Laurens Vanthoor (B) to lose ground without any chance of recovery.

The race of car number 13 had been off to a promising start as well. Mattias Ekström (S), Marcel Fässler (CH) and Edward Sandström (S), after starting from grid position 32, had improved to seventh place within the first five hours. When Fässler, shortly after 11 p.m. was about to overtake a Ferrari on the left in front of the last chicane the rival failed to notice him and heavily touched the Audi. The WRT R8 hit the track barrier. A broken rear suspension meant the early end of the race.

After 270 laps, the race of car number 0 was over as well. Matt Halliday (NZ) was in 26th place when he received a tire pressure warning in the cockpit. Shortly afterward, the WRT Audi hit the tire stack in the Raidillon corner, damaging not only the body parts and the rear suspension but the chassis as well. The Newzealander and his team-mates Niki Mayr-Melnhof (A) and Rahel Frey (CH) were forced to retire.

Team United Autosports with Will Bratt/Glynn Geddie/Alain Li/Mark Patterson (GB/GB/F/USA) competed in the Pro-Am category. Suspension and body repairs after a spin that was not the team’s fault caused the squad to lose a lot of ground right in the early phase. A rare defect of the V10 engine, which has been regularly completing 20,000 racing kilometers in the hands of customers for years, meant the early end in the sixth hour of the race.

In view of these results, the assessment of Romolo Liebchen, Head of Customer Sport at quattro GmbH, was mixed: “After the class victory at Daytona, we very much would have liked to have won another 24-hour race with the R8 this year. Our customers were well prepared but it was obvious that even Audi’s best sports car drivers had no realistic chances at Spa this year. We’re hoping for the Audi R8 LMS ultra with a few title decisions in the second half of the year will be able to show its true form.”