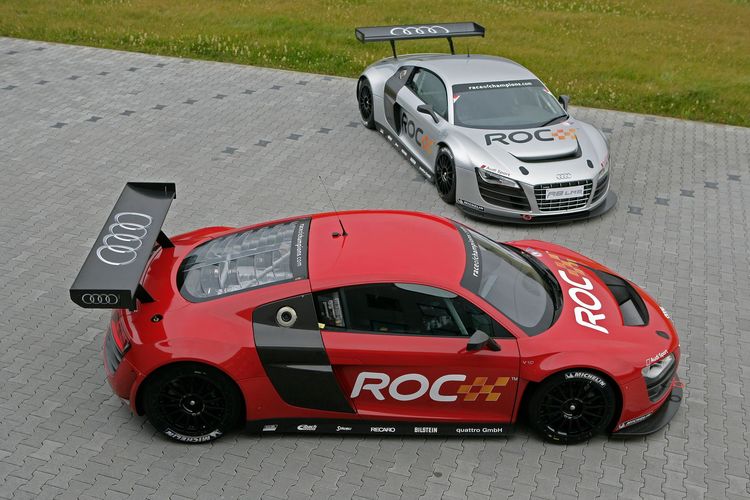 When the prestigious Race of Champions as a contest of the world’s best race and rally drivers visits Düssseldorf on November 27 and 28, Audi will be part of the action too. The Audi R8 LMS will be one of the cars in which past and present motorsport stars like Tom Kristensen, Sebastian Vettel, Alain Prost and their colleagues will compete with each other.

With a track record of 60 victories in two years it has long become a star in GT3 competitions and at the Race of Champions the world’s best motorsportsmen will place their trust in it too: the Audi R8 LMS will be one of the protagonists at the Esprit-Arena Düsseldorf on Sunday, November 28. “We’re happy that the world’s best race and rally drivers will also be seen in the Audi R8 LMS,” says Head of Audi Motorsport Dr. Wolfgang Ullrich. “In the hands of our customers the GT3 sports car has proved its racing capabilities by clinching 60 victories and five title wins in just 24 months. The model has also provided the expected commercial impulses. The customer sport program has long become the desired third pillar of Audi’s motorsport strategy. That such an illustrious driver line-up and the Audi R8 LMS can now be watched together will be a spectacular culmination of the year for motorsport fans in Germany.” Audi provides two GT3-specification R8 LMS cars that will be fielded by Phoenix Racing in Düsseldorf.

Audi “factory” driver Tom Kristensen will again meet with the world’s best rivals this year. At his tenth Race of Champions the Dane, who won the ROC Nations Cup for Scandinavia together with Mattias Ekström in 2005, will meet with former Formula 1 World Champions Michael Schumacher and Alain Prost, challenge Sebastian Vettel and World Touring Car Champion Andy Priaulx and compete with record World Rally Champion Sébastien Loeb. Many other names complete the line-up – including Filipe Albuquerque, who two weeks ago finished the Italian GT Championship as the runner-up in the R8 LMS.

ZDF to broadcast the spectacular event on Saturday and Sunday

Not only the fans on location in Düsseldorf can look forward to the Race of Champions as the German TV channel ZDF will air reports of the event in Düsseldorf on Saturday on “das aktuelle sportstudio” and on Sunday as part of its “SPORTreportage” program.

When Michèle Mouton, who finished the 1982 World Rally Championship as the runner-up in the legendary Audi quattro, came up with the idea of the Race of Champions together with Fredrik Johnsson, the Four Rings participated in the inaugural event. In 1988 all former world rally champions competed against each other in the spectacular Audi Sport quattro S1 at Montlhéry in France and a year later the Group B vehicle thrilled fans at the second edition of the Race of Champions that was held at the Nürburgring. Now the event returns to Germany for the first time in 21 years.

The Race of Champions will provide media representatives with the first “meet and greet” opportunity at a press conference at the ADAC Driving Safety Center Grevenbroich from 11:00 a.m. to 1:00 p.m. on November 9, 2010, followed by the opportunity to take a ride in the passenger’s seat of the race cars. Audi will be represented with Mattias Ekström, the 2006, 2007 and 2009 ROC winner, and with Tom Kristensen plus the Audi R8 LMS. Media representatives may register to attend the event with the organizer’s press office (telephone +49 221 95743434; e-mail: presse@race-of-champions.de).