Skip to content
Please participate in our survey and help us improve the Audi MediaCenter. Thank you!
Go to survey
07/01/10
Ingolstadt
Motorsport

Audi R15 TDI to be driven at the Norisring

Discover the power of imagination with Audi and Andrés Reisinger. #AudiAndresReisinger #DesignMiami *The vehicle shown is a concept vehicle that is not available as a production vehicle
YouTube 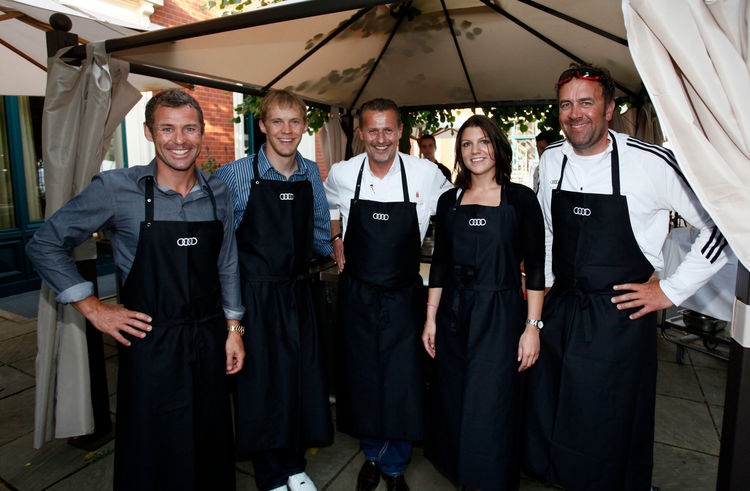 High-ranking guests, two vehicle debuts and Audi’s Le Mans winners are just some of the attractions of the brand at its DTM home round at the Norisring.

The spectators in Nuremberg will experience Audi’s Le Mans winner: the victorious Audi R15 TDI designated as car number 9, which set a new distance record at the famous Le Mans 24 Hours, will be showcased across from the Audi VIP Lounge on the “Zeppelinwiese” field his weekend. On Sunday at 1:05 p.m. the winning car will do a demo lap around the Norisring.

Timo Bernhard and Romain Dumas will be guests in Nuremberg as well. The two sports car drivers who won the Le Mans 24 Hours together with Mike Rockenfeller will cheer “Rocky” on during his next DTM race and meet the audience’s wishes for autographs at the exhibition booth of the R15 TDI on Sunday.

With the new Audi RS 5 Coupé, the DTM will see a vehicle debut: the 331-kW high-performance model will make its debut as the DTM safety car. Another vehicle spectators will be able to marvel at for the first time at the DTM is the new 412-kW Audi R8 GT. The sports car of which just 333 units will be produced will be showcased at the Audi Shop and be driven around the race track during the Audi Drive Away on Sunday.

Fans will encounter the new Audi A1 in varied form in Nuremberg: in addition to the three production-style Audi A1 cars at the “Fantreff,” the Wörthersee Collection will be presented at the entrance to the DTM paddock. The models sporting the “FC Bayern,” “Follow Me,” “Wasserwacht,” “Competition” and “Pickerljäger” designs were absolute eye-catchers as early as on their debut in Austria.

An attractive cross-section of Audi’s extensive model range will be presented to spectators on the race track in Nuremberg. At the Audi Drive Away the German sales organization will hand over four Audi A3 Cabriolets, seven Audi A5 Cabriolets, nine Audi A5 Coupé and Sportback cars, six Audi R8 Spyder models and 20 Audi RS 6 to dealers. The vehicles will do a lap around the race track in two groups on Sunday at 1:05 p.m. and at 3:40 p.m.

Mattias Ekström handled a particularly busy schedule. The Swede attended the press conference at the Norisring on Tuesday morning and then directly went from there to the Audi Motorsport Press Club in Hamburg. At the gourmet restaurant “Seven Seas” on the “Süllberg” Ekström and his fellow Audi racers Tom Kristensen and Katherine Legge met with “stars chef” Karlheinz Hauser, media representatives and prominent guests including skipper Tim Kröger, who had won the German Sea Sailing Championship (ORC 1 class) with the Audi A1 team at the Kieler Woche just a few days earlier, actor Till Demtrøder, who was a member of Kröger’s mixed sailing crew of professionals and amateurs, and former editor-in-chief of the German news magazine “Der Spiegel” Stefan Aust, who just made headlines by acquiring the TV channel N24.

Thanks to his sponsor Playboy Markus Winkelhock received particularly attractive “home support” on the Norisring grid: Michaela Grauke, who like the Audi “factory” driver hails from Germany’s Schwaben region, was selected as 2009 Playmate of the Year. As a grid girl, the native of Stuttgart will be a coveted subject for photo shoots in front of the Audi A4 DTM.

The Audi VIP Lounge will feature two special attractions at the Norisring: on Sunday after the race guests at the VIP Hospitality will be treated to an exclusive concert by Christina Stürmer. An Audi V8 DTM with which the brand clinched its first two DTM titles, in 1990 and 1991, symbolizes the ”30 years of quattro” anniversary as an exhibition piece, accompanied by film clips from this grand era.