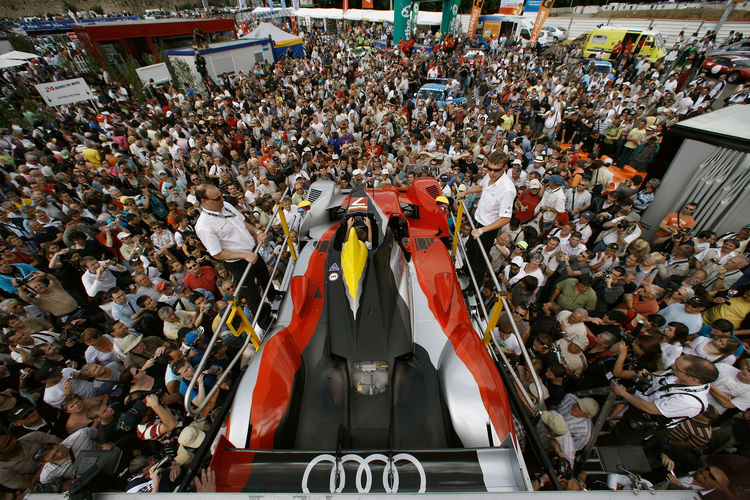 Audi Sport Team Joest has successfully taken the first formal hurdle at the 78th edition of the Le Mans 24 Hours: all three Audi R15 TDI cars passed the Technical Scrutineering at the Place des Jacobins in the center of the Western French city in front of thousands of spectators without any problems.

“It’s great that so many fans turned out for the Technical Scrutineering on a normal workday,” said Head of Audi Motorsport Dr. Wolfgang Ullrich. “This shows the enormous enthusiasm for the race at Le Mans.”

Audi has been contesting the Le Mans 24 Hours since 1999 and uses the world’s most important endurance race to test technological innovations. With a track record of eight victories, the brand with the four rings is the most successful automobile manufacturer in recent Le Mans history.

This year Audi aims to equalize its ranking in the race’s honor roll with Ferrari and to celebrate its ninth victory. Only Porsche’s track record reflects more exploits. “We’ve done everything that’s necessary to come well prepared to Le Mans,” says Dr. Ullrich. “The squad is motivated and, unlike last year, well rested too. And we’ve got three strong driver teams all of whom are capable of clinching victory.”

On Monday, Dindo Capello, Tom Kristensen and Allan McNish were yet again the drivers to grant most of the wishes for autographs at the Place des Jacobins. In 2008, they had secured Audi’s last victory at Le Mans to date in the Audi R10 TDI. But Timo Bernhard, Romain Dumas, Marcel Fässler, André Lotterer, Mike Rockenfeller and Benoît Treluyer, as well, were surrounded by fans and media representatives.

The three Audi R15 TDI cars will have their first outing on the track in free practice on Wednesday starting at 4 p.m. The first qualifying session will be on the agenda afterwards. “But we’ll probably only know where we really stand compared with our rivals after the first hour of the race on Saturday,” believes Audi “factory” driver Allan McNish.

For the two practice days, rainy weather has been predicted at Le Mans. Weather conditions are expected to improve again for the race.