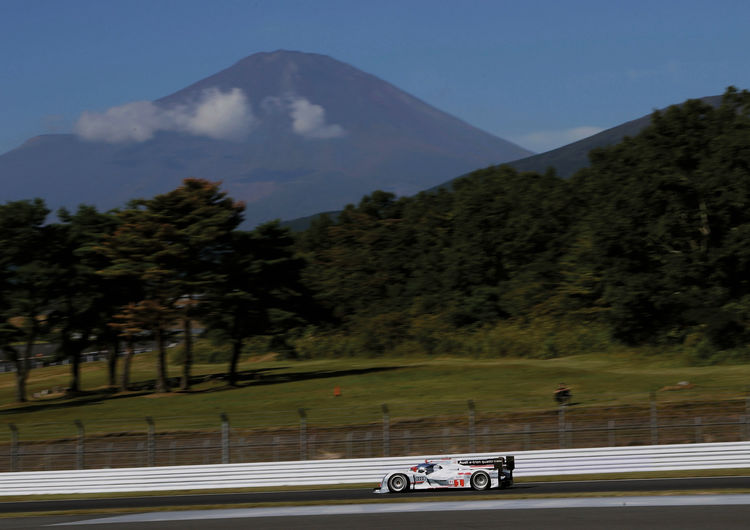 Good starting base for Audi at the seventh round of the FIA World EnduranceChampionship (WEC): The two Audi R18 e-tron quattro cars will start the race on Sunday from the front two rows. Marcel Fässler/André Lotterer/Benoît Tréluyer will start the race from second position in their number „1“ Audi R18 e-tron quattro.
Download PDF (169 KB)
Facebook
Twitter
LinkedIn
WhatsApp

Good starting base for Audi at the seventh round of the FIA World Endurance Championship (WEC): The two Audi R18 e-tron quattro cars will start the race on Sunday from the front two rows.

In qualifying, Benoît Tréluyer converted his track knowledge at Fuji into a good grid position. The Frenchman, who drove in Japan for twelve years in his career, missed pole position by just a very narrow margin at Fuji on Saturday. In the end, with his lap time of 1m 27.639s, the 35-year-old two-time Le Mans winner was lacking merely 14 hundredths of a second to Kazuki Nakajima, who managed to set the fastest time in the Toyota.

The number “1” Audi was directly trailed by Tom Kristensen in the sister car. The Le Mans record winner at the wheel of the hybrid vehicle designated as car number “2” set the third-fastest lap at 1m 28.370s.

Audi’s intermediate result remains clear on the seventh weekend of the season. The brand has achieved the fastest time in qualifying as many as five times this year. On Sunday, Audi is set on battling for the sixth victory of the season. The adjustment of the Audi R18 e-tron quattro to the 4.563-kilometer track that is within viewing distance of Mount Fuji started with testing on Wednesday. The facility, which is the home track of competitor Toyota, is characterized by unusual corners and cambers.

The seventh WEC round starts on Sunday at 11:00, local time (4:00 CEST) and can be watched live on the internet: www.audi-liveracing.com broadcasting the entire race. The TV channel Eurosport will air the last 90 minutes live.

Dr. Wolfgang Ullrich (Head of Audi Motorsport): “With a difference of only 14 hundredths of a second between Toyota and Audi, qualifying was very close. We started to realize that it would become a tough battle, but then it turned out to be even a bit closer than expected. The most important thing is that in the practice and qualifying sessions we’ve put ourselves in a good position for the race on Sunday. I’m expecting a thrilling race. And the large turnout of spectators on Saturday gives us reason to hope for a big crowd on Sunday.”

Ralf Jüttner (Technical Director Audi Sport Team Joest): “Qualifying was a thriller because the three quickest cars were out on track at the same time. The lap by Benoît Tréluyer was good but Kazuki Nakajima drove a very good time and bumped us from position one. I congratulate him on that. He’s intimately familiar with this circuit – it’s Toyota’s home track. The gap between us and him isn’t very large. Tom Kristensen wasn’t able to make optimal use of his tires. But the two front rows are okay with respect to the race.”

Tom Kristensen (Audi R18 e-tron quattro #2): “It’s a nice feeling to be racing again in Japan where my sports car career started exactly 20 years ago. We did a good job of preparing for the race and I gave my best in qualifying. Unfortunately, my first lap wasn’t so good and I was quick only in the third sector. Afterwards, I wasn’t able to repeat my performance in this track sector. That’s why I didn’t make another attempt because we’ve got to start the race on this set of tires.”

Allan McNish (Audi R18 e-tron quattro #2): “We worked intensively on the test day and on the two practice days. Our main focus was always on working out a good balance for our car in the race. The track is challenging and demands a car that is consistent and has good driving stability. For long distances, we’ve achieved exactly these aims. We knew that Toyota might be a bit stronger in qualifying. And, unfortunately, Tom didn’t always catch a perfect, free lap.”

Marcel Fässler (Audi R18 e-tron quattro #1): “Benoît delivered a brilliant lap. In the end, he was only trailing Toyota by a very narrow margin. That’ll bother him a little, I’m sure. Still, it was a superb achievement on his part. He was very pleased with our car. And that’s the main thing for the race. It shows that our Audi’s got a lot of potential. We want to do a good job of putting that on track in the race.”

André Lotterer (Audi R18 e-tron quattro #1): “Ben really drove a tremendous lap. He knows the track here well and showed all of his talent. Obviously, with such a small deficit of just one and a half tenths of a second you think, ‘What a shame, a little bit more would have been possible.’ But that’s what you think after almost any qualifying session. Tomorrow we’ll probably experience a fierce battle that I’m already looking forward to.”

Benoît Tréluyer (Audi R18 e-tron quattro #1): “It was a good lap even though it’s possible that I could have driven a bit faster. I don’t know, though, if it would have been enough to take the pole position. The car was very good. I’m a little disappointed because you always want to be at the very front, particularly here in Japan where I spent the major part of my career. A large number of fans have come to the track here and given me a warm welcome. I’d have liked to thank them and the team by taking pole.”