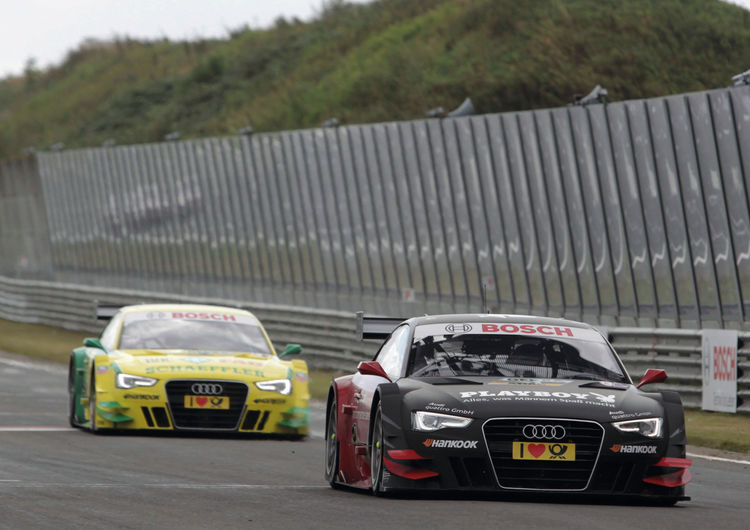 Audi is the first manufacturer to have achieved a one-two-three victory in the 2012 DTM. At Zandvoort (The Netherlands) Edoardo Mortara (Playboy Audi A5 DTM) triumphed in front of his two brand colleagues Mike Rockenfeller (Schaeffler Audi A5 DTM) and Mattias Ekström (Red Bull Audi A5 DTM). With that, a driver from all three Audi teams was on the podium.

39,000 spectators (throughout the weekend) watched a spectacular DTM race in extremely difficult conditions. Rain showers from the nearby North Sea repeatedly moved across the race track that was never wet enough, though, to switch to rain tires. “In such crazy conditions, you can fly off the track in any corner,” said Edoardo Mortara, who celebrated his second victory of the season and reduced the gap to leader of the standings Gary Paffett to 35 points. “It would be raining some of the time and then again it wouldn’t. I’m very happy. I want to thank everyone at Audi Sport and Audi Sport Team Rosberg for the superb work. It was a fantastic race!”

In a fierce duel, Edoardo Mortara prevailed against Mike Rockenfeller (Audi Sport Team Phoenix) who had taken the lead at the start and commandingly controlled the race for a long time. However, when rain set in again, Mortara managed to close the gap to his brand colleague and overtook him on lap 32 in the famous “Tarzan Bocht.” “I didn’t want to take any unnecessary risks,” commented Rockenfeller. “When it starts to rain it’s easier when you’re the car that follows – ‘Edo’ took advantage of this.”

Mattias Ekström (Audi Sport Team Abt Sportsline) perfected Audi’s one-two-three result. The Swede was fighting a nail-biting duel across several laps with leader of the standings Gary Paffett which he decided in his favor, also thanks to a good strategy and quick pit stops by his team.

Adrien Tambay (Audi ultra A5 DTM) scored his first points in the DTM. The 21-year-old youngster shone by taking fifth place in difficult conditions and even held up to the pressure from the two-time season winner Bruno Spengler, who had also been the runner-up in the standings up to now.

Filipe Albuquerque was classified in 15th place although he was forced to park his TV Movie Audi A5 DTM in the pits after 34 laps. The Portuguese had to drive through the gravel trap of the “Tarzan Bocht” when Martin Tomczyk and Gary Paffett collided directly in front of him. In the incident, the front splitter of his A5 was damaged.

The quickest in qualifying, Timo Scheider, experienced a pitch-black day. At the start, the two-time DTM Champion dropped from first to 14th place and in a collision with David Coulthard damaged the front of his AUTO TEST Audi A5 DTM.

Right on the starting lap, the race was over for Miguel Molina (Red Bull Audi A5 DTM) and Rahel Frey (E-POSTBRIEF Audi A5 DTM). While heading for the first turn the Spaniard collided with Robert Wickens, who a few turns later proved to be Rahel Frey’s undoing too. The Swiss was unable to evade the Mercedes of the Canadian that was standing sideways on the track after a spin and was forced to retire.

Despite the four retirements it was a great day for Audi at Zandvoort – on a track on which the brand with the four rings has now clinched as much as its sixth victory since its return to the DTM in 2004. “It’s good to see that the performance is there,” said Head of Audi Motorsport Dr. Wolfgang Ullrich. “Now we’re back in the position we always want to be in: in contention for victory. Here at Zandvoort, we were strong as a whole team. I’m happy for the guys who have been working hard to make this success possible.”