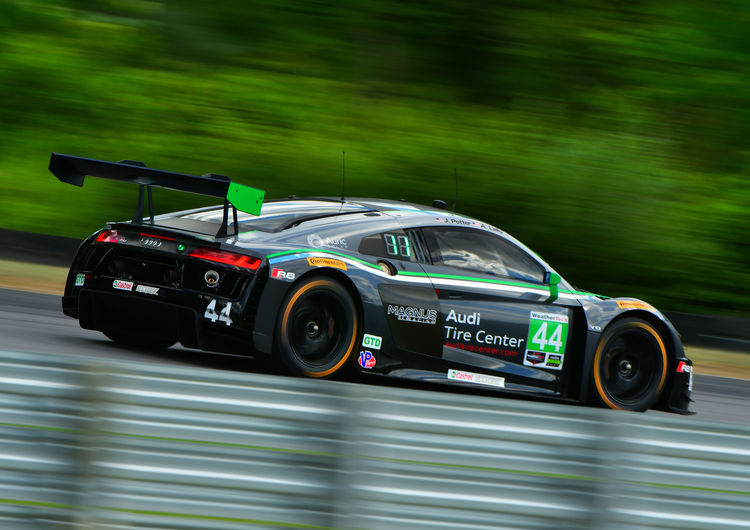 Audi customer teams celebrated race victories in the Unites States, Australia and in the United Kingdom this weekend. In New Zealand, the Audi R8 LMS ultra won a championship title.

One-two result in the United States

For the second time in the current season, an Audi customer team triumphed in the IMSA WeatherTech SportsCar Championship. At Lime Rock, Andy Lally and John Potter piloted the Audi R8 LMS of Magnus Racing to victory in the GTD category. Andrew Davis and Robin Liddell in the Audi R8 LMS of Stevenson Motorsports finished the race in second place. As a result, Audi is leading the manufacturers’ standings in the GTD category after round seven of the season.

In the North Island Endurance Series in New Zealand, Neil Foster and Jonny Reid in the Audi R8 LMS ultra of International Motorsport clinched a third place in the third and final round of the season at Manfeild. In the championship, they were in the top spot of the standings on equal points with another team. Consequently, the organizers decided that both teams would share the drivers’ title in this championship for three-hour races.

Successful weekend for the Audi customer teams in the Victorian State Circuit Racing Championship (VSCRC) in Australia: In round three of the season at Sandown Raceway, Steven McLaughlan in the Audi R8 LMS ultra of Jamec Pem Racing won all three races. His brand colleague Ross Lilley took second place in the first two heats and Rod Salmon finished the last race as the runner-up.

Phil Hanson and Nigel Moore celebrated a victory in the Dunlop Endurance Championship in the United Kingdom: In round five of the season at Croft, they started in the Audi R8 LMS ultra of Tockwith Motor Sports from pole position and after three hours of racing crossed the finish line as the winners with a one-lap advantage.

Two successful stars in German sport followed the home round of Audi at the Nürburgring. The former ski star Maria Höfl-Riesch and the erstwhile swimmer Michael Groß both attended the FIA WEC event as guests of Audi. During the VIP hot laps, the three-time Olympic gold medalist Höfl-Riesch experienced corner speeds at the limit in an Audi RS 7 of which she was behind the wheel. She also had a look behind the scenes of the Audi WEC team with Allan McNish. The winner of 21 titles, Michael Groß, also supported Audi and visited the team in the pit garage at the Nürburgring.

On the grid of the 6 Hours of Nürburgring, Audi displayed a sign: The Audi WEC drivers and team members held a sign in front of the cameras, which said “Get well soon Ben,” in order to send their best wishes to Benoît Tréluyer. The Frenchman had to miss the fourth round of the FIA WEC after he injured himself in a mountain bike accident.

Joest mechanics ahead in Lego Challenge

Audi drivers Lucas di Grassi, Loïc Duval and Oliver Jarvis tested their skills at the Nürburgring. Their challenge was to build a Lego Audi R18 model as fast as possible, while they were pitted against their mechanics. Chief mechanic Bastian Leiter, Heiko Rennert and Jan-Philipp Pförsich from Audi Sport Team Joest tackled the project as fast and systematically as going about their daily work. In the end, the mechanics were clearly faster than the race drivers in assembling the 166-part Lego model.

Audi driver André Lotterer is an enthusiastic rally fan. At the fourth round of the FIA World Endurance Championship (WEC) at the Nürburgring, he took the opportunity to attend the Eifel Rallye Festival in Daun. With his private Audi Sport quattro the 2012 endurance world champion visited Audi Tradition which showcased three rare vehicles at the festival. Along with an Audi Sport quattro and a Sport quattro S1, Audi presented the spectacular Audi Group S mid-engine rally prototype. “It is an absolutely fascinating car,” said an enthusiastic Lotterer, who also met one of his childhood heroes: The two-time world rally champion Walter Röhrl drove the Group S car on the rally stages around Daun.

Edoardo Mortara is happy about the birth of a baby

From the podium to the delivery room: On the weekend at Zandvoort, Edoardo Mortara celebrated a third place but the Italian’s week was defined by another personal experience. On Tuesday, his wife, Montserrat Retamal, gave birth to a healthy daughter. The child has been named Sofia. Audi Sport extends cordial congratulations to the couple and sends best wishes to Geneva.

Following his first race as Head of LMP, Stefan Dreyer analyzes round four of the FIA WEC at the Nürburgring.

After the race at Le Mans, Audi Sport did a lot of work. How satisfied are you with the first weekend in your new role?

After Le Mans, we didn’t leave a single stone unturned, worked diligently and improved. That was clearly evident in the way the race at the Nürburgring went. We were strong in qualifying, led the race with both cars and set the fastest race lap, but nevertheless, we suffered a setback halfway through the race. Otherwise we would have been in contention for victory. Today, for the first time this year, both driver squads finished on podium.

Audi used the third aerodynamics package for the first time this season. How satisfied are you?

We expected this bodywork to fit the remaining race tracks. Now we have to achieve the optimum with this package. This will be important because the first half of the championship points for this year have been awarded – now the crucial second half is coming up.

The deficit resulted from a caution period. What exactly happened?

With both Audi R18 cars we had made the third refueling stop when a caution period occurred. Porsche, due to their fuel tank capacity, are able to run a longer distance on one filling – this is a result of the regulations. Consequently, Porsche’s stop fell exactly into this period when the rest of the field had to drive around the track only at a slow pace. This made it possible for Porsche to gain an advantage of over 30 seconds. Due to the subsequent caution periods, we didn’t have to make another refueling stop. Otherwise we’d have lost even more ground due to this splash-and-dash stop.

What are your next goals?

I’m growing into my new role now and am in a personal learning process. I was already pretty happy with the performance of the whole squad in the Eifel. Everyone knows what’s still at stake this year. Five of nine races are coming up. We’re going to do everything within our means to battle for the world championship this year. My job is to motivate all the people and to align the processes of the LMP program to this mission. The overseas races have always been very demanding and won’t be any easier this year. But we do have a good chance to be in contention.