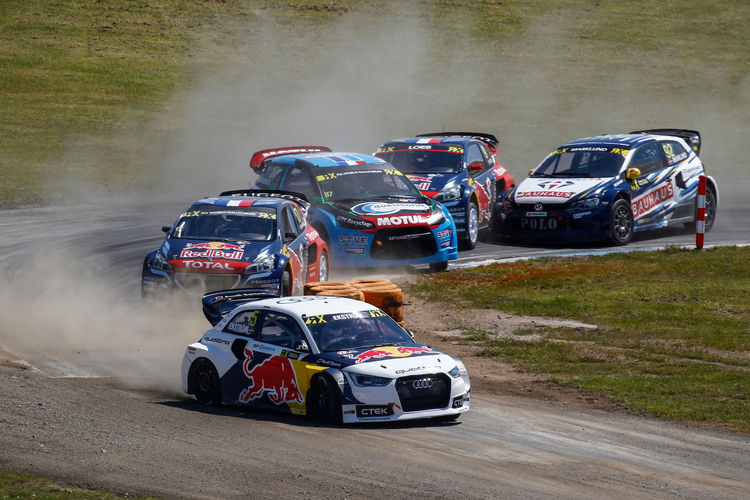 Audi was successful this weekend not only in the WEC and in the DTM. At the Hockenheimring, DTM driver Mattias Ekström’s Team EKS celebrated a one-two result in the World Rallycross Championship round held as part of the DTM’s supporting program. And with the Audi R8 LMS Audi customer teams achieved further triumphs.

Mattias Ekström and Toomas Heikkinen celebrated a one-two win in round two of the FIA World Rallycross Championship at the Hockenheimring. In their two 560-hp Audi S1 EKS RX quattro cars, the Swedish-Finnish duo dominated the event throughout the weekend. “Winning in front of so many DTM and rallycross fans is incredible. This is an experience you can only dream of,” said Ekström who contested a double program of rallycross and DTM racing at Hockenheim. With 48 points in the drivers’ standings Ekström now equals the score of overall leader Petter Solberg. In the teams’ classification, EKS with 93 points already has a 45-point advantage over the second-placed Volkswagen RX Sweden team.

Belgian Audi Club Team WRT in the Blancpain GT Series Sprint Cup celebrated its second consecutive victory in the main race. In round two of the season at Brands Hatch in the UK, the German Christopher Mies and his Belgian teammate Enzo Ide triumphed in the Audi R8 LMS. After taking a podium place in the qualifying race, the duo started from third place on the grid and made up one position at an early stage. Following the pit stop, Christopher Mies took the lead and went on to defend it up to the finish. A success was recorded by Marlon Stockinger and Franck Perera as well. In an Audi R8 LMS of Audi customer team ISR, they took pole position and finished the qualifying race in second place.

In round three of the Australian GT Championship at Perth, Steven McLaughlan in an Audi R8 LMS of Audi customer team Jamec Pem Racing triumphed in race one. Halfway through the one-hour race the Australian took the lead, crossed the finish line with a near-five-second advantage and celebrated his first victory in the Australian GT Championship. In third place, James Koundouris and Marcus Marshall achieved a podium place in an Audi R8 LMS as well and will be traveling to round four at Phillip Island as the leaders of the standings.

Before the DTM season opener at Hockenheim, Jamie Green had two reasons to celebrate. His wife, Ginny, gave birth to their daughter, Georgiana, on Monday. After their two sons, Zachary and William, this is the Green family’s third child. Also at the beginning of the week, the Audi driver was happy about the surprise championship title win by the English Premier League club Leicester City. Green is a great soccer fan and was born in Leicester.

Mike Rockenfeller was treated to a surprise celebration before Saturday’s DTM race at Hockenheim. The driver from Audi Sport Team Phoenix contested his 100th race in the series at the season opener and was presented with a cake on this special occasion. “I had completely forgotten about it, so I was particularly pleased about my team’s thoughtfulness,” said Rockenfeller who is contesting his tenth DTM season this year and won the title in 2013.

Benoît Tréluyer on skiing tour in the Alps

Audi driver Benoît Tréluyer undertook a demanding glacier skiing tour in his home country of France. Together with a good friend, rally driver Yoann Bonato, the endurance race driver climbed an Alpine summit south east of Grenoble in the week prior to the WEC race at Spa. The Col de la Muzelle, at an altitude of 2,600 meters, was the target of the two-day tour. “We’ve spent a night in a mountain hut at sub-zero temperatures,” reported Tréluyer. “But the stunning view and the ski descent were worth every drop of effort.”

The Head of Audi Motorsport about Audi Sport’s successes at Spa and at Hockenheim.

How did you experience this weekend?

It’s been a strong and successful weekend for Audi Sport – particularly Saturday. Celebrating victories in the WEC and in the DTM on the same day is something that cannot be taken for granted. So, our joy about them was all the greater. A big thank you goes to everyone involved in them. It’s a shame that things didn’t go so well on Sunday at Hockenheim in the DTM. We’re trying to understand what the reason was. But we’re already looking ahead to the next two races at Spielberg.

How do you rate the success with the Le Mans prototypes at Spa?

For our LMP squad, it was a really difficult weekend. Obviously, having won the race with our car number “8” is a very nice result. But it’s also clear that we still have a lot of work to do.

Mattias Ekström won the round of the World Rallycross Championship at Hockenheim. Were you able to watch the one-two result of his team?

Unfortunately, not – I was in a meeting during the final rounds. But of course I’m happy for Eki. I heard that it was a really strong performance.

The Audi Sport TT Cup had a successful start of the season at Hockenheim as well ...

I watched race two on Sunday and really liked what I saw. There are some promising young talents on the grid that we’re promoting and that have great potential.