Links
{{ activeItem() }}
Twitter
08/13/20
Investing in a sustainable #future: Efficient #production processes and #recycling cycles help us achieve our… https://t.co/PsNA5EJS8F
08/12/20
#WhatsUpAudi on a secret mission: Discover the process behind the #Audi camouflage #design and how it sets the tone… https://t.co/4989jovfiy
08/12/20
quattro and #etron – a powerful combination of high #performance and notable economy. The #electric #quattro in the… https://t.co/MRA8Tq17uv
08/12/20
Quattro and #etron – a powerful combination of high #performance and notable economy. The #electric #quattro in the… https://t.co/yTGjQhUGSL
Audi on Twitter
08/13/20
After 6 races in Berlin, @ReneRastRacing moved up to 15th in the drivers’ standings. @LucasdiGrassi finishes the se… https://t.co/LKA8DQGqGT
08/13/20
Sixth position in the end after eleven races in the 2019/2020 @FIAFormulaE season. &gt;&gt; https://t.co/ktQ0jleme7… https://t.co/ykNwl8cJNu
08/13/20
Strong close to the season here in Berlin. P4 @ReneRastRacing and @LucasdiGrassi moved up from 10th to 6th. &gt;&gt;… https://t.co/GN1y0Ue32C
08/13/20
Underway in Berlin for the final time in season 6. &gt;&gt; https://t.co/ktQ0jleme7 #PerformanceIsAnAttitude… https://t.co/tGnQdIr6Ob
Audi Sport on Twitter
{{ activeItem() }}
Facebook
08/11/20
Victories for the Audi R8 LMS in the GT World Challenge Europe at the Misano World Circuit highlighted a weekend with wins and podiums around the world. Well done to our customers. 🇮🇹 🇩🇪 🇨🇳 🇷🇺 🇧🇪 🇿🇦 🇸🇪 🇺🇸 >> audi.com/GT3 >> audi.com/GT4 >> audi.com/TCR #PerformanceIsAnAttitude
08/10/20
Before heading to Lausitzring this weekend, let’s have a quick look back on the DTM safety measurements at the track in Nico Mueller’s latest #DriversDiary. >> audi.com/DTM #PerformanceIsAnAttitude #ThanksToDTM
08/10/20
We will be back racing at the Lausitzring for the next two weekends. Let’s have a look back on our history at the circuit. >> audi.com/DTM #PerformanceIsAnAttitude #ThanksToDTM
08/03/20
What a start to the DTM season it was for Nico Mueller! Race victory and he is currently leading the drivers’ standings. See how he experienced the weekend in his latest #DriversDiary. >> audi.com/DTM #PerformanceIsAnAttitude #ThanksToDTM
Audi Sport on Facebook 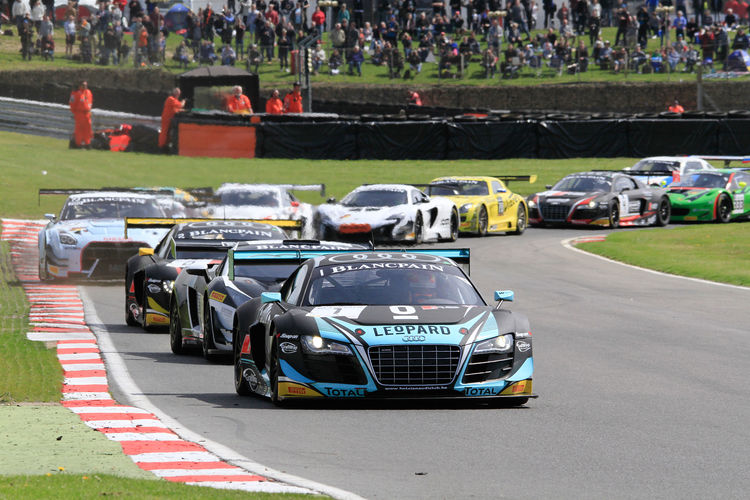 Belgian Audi Club Team WRT was dominant with its driving duo of Laurens Vanthoor and Robin Frijns in the #1 Audi R8 LMS ultra in round two of the Blancpain Endurance Series at Brands Hatch. Pole position and victory in both the Qualifying race and Main race ensured that they are the new leaders of the standings. This successful weekend was very special for Belgian Audi Club Team WRT as they honored the memory of Mr. President, J.G. Mal-Voy, chairman of the Belgian Audi Club, who passed away in April.

Film shooting at the Lausitzring: High-tech audio manufacturer Teufel produced a commercial at the East German circuit on Friday, featuring Miguel Molina and the Teufel Audi RS 5 DTM as the main actors. Teufel is a new partner of Audi Sport this season and intensively uses the DTM commitment for its own corporate communications. “The filming was a lot of fun,” says Miguel Molina. “I think it will be a great film.”

Lucas di Grassi extended his lead in Formula E after finishing second in Monaco. The Audi factory driver, who starts for the Audi Sport ABT Formula E Team in the series staged exclusively for electric powered single-seater cars, drove a spirited race in the principality and extended his lead before the final four races. The series’ first outing in Germany follows on May 23, when the drivers line-up on the grid on the former airport Tempelhof.

United Autosports celebrated its first podium result of the year when Phil Burgan finished runner-up in the second race of the GT Cup Championship, round two at Brands Hatch. Burgan proved his quality against the clock: In his #23 Audi R8 LMS ultra he claimed one pole position and two further top three starting positions.

Class victory in the STT

Successful race weekend for Berthold Gruhn in the Spezial Tourenwagen Trophy (STT). Gruhn, driving his private Audi R8 LMS ultra, finished second in class in the first race at Oschersleben and won his class in the second race.

With a car much older than himself, Audi factory driver Mike Rockenfeller (31) took part in the fourth edition of the “Bodensee-Klassik” historic rally. The DTM star was at the wheel of a NSU TT built in 1971. His father, Helmut, provided navigation for “Rocky”.

Marschall back at school

Dennis Marschall delivered a perfect start in the Audi Sport TT Cup – victory in round two at the Hockenheimring and the lead of the drivers’ standings. The 18-year-old, however, did not have a lot of time to celebrate. Back home in Eggenstein, some 40 kilometers away from the track, Marschall had to return to his desk. “On Monday, I had to take a written test in business. But at least the hours in class pass a bit faster after such a victory,” says Marschall. Before the second race weekend at the Norisring (June 26–28) he has to tackle another challenge: the written tests for his high school diploma.

At the symposium held at the Vienna Hofburg Congress Center on May 7 and 8, Audi presented powertrain technology innovations and provided insight into racing. Prof. Dr. Ulrich Hackenberg, Member of the Board of Management, Technical Development, AUDI AG, explained the development of diesel technology in his speech ‘Audi at Le Mans – The Success Story of the TDI.’ In 2006, Audi was a pioneer and the first manufacturer to celebrate victory in this 24-hour race with diesel technology. In total, Audi TDI engines have won the French classic eight times. In the past three years, the diesel engines have been combined with an electrified front axle in the Audi R18 e-tron quattro hybrid race car.

First win for the Audi TT in TCR

First victory for the Audi TT in the new TCR International Series. In Portimão (Portugal) the private team of Franz Engstler was strengthened by the addition of two GT drivers, Dane Nicki Thiim and South African Kelvin van der Linde. Nicki Thiim, on his TCR debut, started from pole position and celebrated a lights-to-flag victory. Kelvin van der Linde completed the strong performance of the TT duo by finishing in fourth place.

A word from … Arno Zensen

Audi Sport Team Rosberg with Team Director Arno Zensen managed a kickoff on the first DTM weekend at Hockenheim that was made to measure.

Jamie Green gave your Audi Sport Team Rosberg its first DTM victory since 2012. As a result, the joy must have been huge …

Absolutely. We’ve never had such a successful start of the season before: victory for Jamie (Green), sixth place in the first race for Nico (Müller) and the lead of the teams’ standings. We do have mixed emotions, though, because our strength in the first race was offset by our weakness in the second one with no points scored.

Generally speaking, things went really well for Audi with two victories and the lead of the manufacturers’ standings. Did you expect this?

No. Before the first race weekend, you never know how the relative strengths will pan out between the brands. I’d been expecting a stronger performance at Hockenheim particularly by BMW. We also owe the fact that things went so well for Audi to the hard work of all the engineers and mechanics who gave their all up to the last day before the season opener.

How did you experience the DTM innovation that now features two races per weekend?

I think that for the DTM in general and especially for the trackside crowd and the TV viewers this is a positive thing. For us as a team, it’s incredibly strenuous. The breaks between the qualifying sessions and the races are very short. If anything unforeseen should happen that requires repair work it could be a close call.

In three weeks from now, you’ll be traveling to round two at the Lausitzring. The drivers from Audi Sport Team Rosberg have never achieved a better place there than seventh. What indications would speak for an improvement?

In any event, the speed we had there last year gives rise to hope. Unfortunately, Jamie spun while he was running in third place. This year, the performance weights resulting from Audi’s successes at Hockenheim will, quite literally, be carrying additional weight in meeting the challenge.


Coming up next week