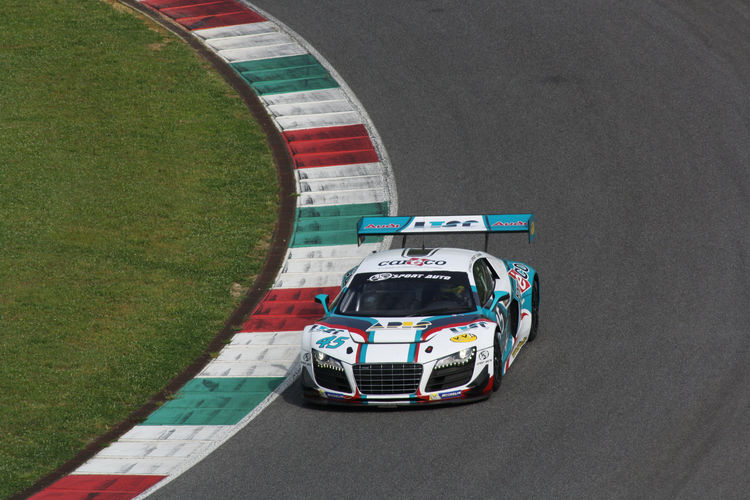 The AB Sport Auto team celebrated a class victory with the Audi R8 LMS in the second round of the V de V Endurance Series. Franck Thybaud/Thierry Proust/Maxime Jousse won the GTV2 class in the 4 hours of Mugello (I). The trio clinched third place in the overall standings. Eric van de Vyver/Tiziano Carugati/Michel Wegelin, who drive an Audi R8 LMS in the GTV2 class for the V de V/AB Sport Auto team, finished second and, in doing so, completed the Audi customer team’s perfect one-two result in the class.

Mike Skeen claimed a podium place during the fourth Pirelli World Challenge race weekend in Birmingham (USA). The Audi driver from CRP Racing drove his Audi R8 LMS ultra to third place in the first race. In the second race around the challenging Barber Motorsport Park in the state of Alabama, last season’s runner-up ran with the leading group, but was unable to finish higher than fifth.

A change within the starter list in the DTM: The addition of the Berlin-based high-tech audio product specialists Teufel at Audi Sport brings with it a new name for the car of Miguel Molina. The Spaniard will start the 2015 season with the Teufel Audi RS 5 DTM. His “17” race number will remain unchanged.


Rockenfeller mashes the pedals in Majorca

Mike Rockenfeller spent a week training in Majorca shortly before the DTM season opener at Hockenheim. The 2013 DTM Champion spooled off a comprehensive training program on a road bike around the popular Mediterranean island. “I feel very good physically and mentally. We rode three to four hours a day and tackled a few mountain stages in the process. I was also able to spend a lot of time with my family, who accompanied me. My batteries are completely recharged, and the season can begin,” said ‘Rocky.’

René Rast at the FIA WEC press conference in Brussels

One week before the Spa 6 Hours, René Rast attended a press conference of the FIA World Endurance Championship WEC in Brussels. The German racing driver is the latest addition to Audi’s LMP driver line-up and will contest his first race with the Audi R18 e-tron quattro at Spa during the first weekend of May. In the Brussels Autoworld museum, the 29 year-old professional driver answered the questions of the journalists who he met full of anticipation prior to his debut in the hybrid sports car.

Audi is saddened to learn of the death of J.G. Mal-Voy. As the Belgian Audi Club’s Chairman, Mal-Voy discovered and promoted renowned race driver personalities in his native Belgium during a period spanning more than three decades, and initiated and supported highly successful racing programs. Countless Belgian drivers owe important stages in their careers to him. They include Jean-François Hemroulle, one of a total of seven Audi Touring Car Champions, in 1996, or Laurens Vanthoor, the current Blancpain title winner and last year’s winner of the Spa 24 Hours in the Audi R8 LMS ultra. Mal-Voy had unexpectedly passed away on Monday at the age of 67. “His death has deeply shocked us,” says Head of Audi Motorsport on behalf of all employees of Audi Sport and Audi Sport customer racing. “In addition to his untiring commitment to the four rings, he was an outstanding and versatile personality. He was highly respected in the entire world of racing. Our thoughts are with J.G. Mal-Voy’s family. We will always remember him.”

Audi driver Marcel Fässler talks about the forthcoming WEC race at Spa and his outing in the new Audi R8 LMS at Nürburgring. How does it feel to travel to Spa as WEC championship leader this coming weekend?

At the moment the position in the standings is secondary, it’s much too early in the season. It was more important that we were competitive at Silverstone. However, the points we scored in Great Britain can be decisive at the end of the season.

What do you expect at Spa?

Spa is my favorite track. I love driving there. However, it’s difficult to judge just how good we’ll be compared to the competition. Especially as the circuit characteristics are different to Silverstone. Our target is to fight for victory and to extend the championship lead.

You drove the new R8 LMS in the VLN at the weekend. What did you think?

The Audi R8 LMS is an uncompromising racecar, it’s great fun to drive. It’s great to know that we have a car that is also fast in difficult conditions, as we saw at the VLN where it won in the hands of Christopher Mies and Nico Müller. We were a little unlucky in the race with the refueling pump, but I was able to drive plenty of laps in the dry and wet and gain some important knowledge for the 24-hour race at the Nürburgring.