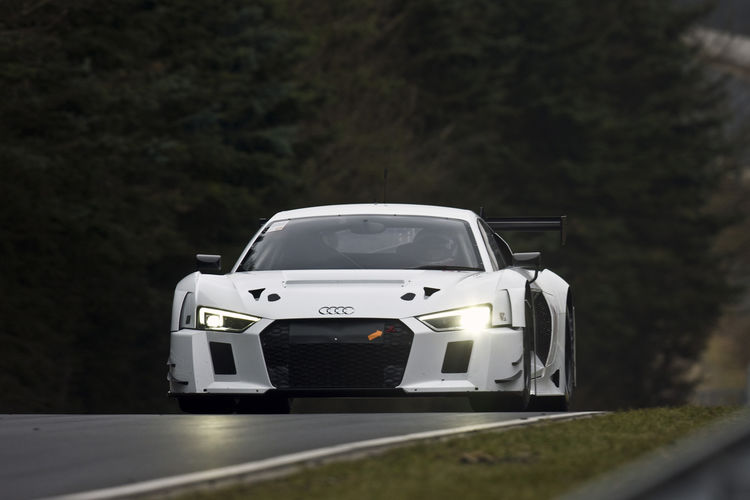 Although there has not been a racing event in Audi’s calendar this weekend, the brand with the Four Rings thrilled many fans. The new Audi R8 LMS had its first public appearance at the Nürburgring, the family members of employees got to know Audi Neuburg at a Family Day and the readers of a specialist magazine were happy to get first-hand driving tips from two former Audi DTM champions.

Only eleven days after its world debut, the new Audi R8 LMS thrilled a trackside audience for the first time. In the VLN Test and Set-up Session on the Nürburgring,

Frank Stippler and Markus Winkelhock shared Audi’s test vehicle on Saturday. The two winners of the Nürburgring 24 Hours drove 424 kilometers and worked out a set-up for the new GT3 sports car for the 25-kilometer track in the Eifel. The model will make its racing debut in the VLN Endurance Championship Nürburgring season opener on March 28.

On Saturday, Audi Neuburg received internal and external employees and their family members at a Family Day. Audi’s Management Board Member Prof. Dr.-Ing. Ulrich Hackenberg and Head of Audi Motorsport Dr. Wolfgang Ullrich welcomed some 1,500 guests. The new complex with its modern facilities opened its gates to the families for the first time. The visitors had the opportunity to view the fascinating world of Audi Sport with a line-up on display ranging from the race cars used in the WEC, DTM, GT racing and the Audi Sport TT Cup through to components such as the hybrid system of the Le Mans winning Audi R18 e-tron quattro and obtained autographs from the race drivers. In addition, Audi raffled off 30 opportunities for rides in the passenger seat with the Audi driving experience.


Drifting with the DTM stars

An unusual role for Timo Scheider and Mattias Ekström: The Audi factory drivers served as instructors of the Audi driving experience for readers of Sport BILD magazine in Saalbach, Austria. With instructions provided by the two DTM champions the ‘drift’ students got a first-hand impression of the superiority of the permanent quattro all-wheel drive on icy ground in an Audi S5 Sportback*.

The fans of the ADAC GT Masters can look forward to seeing another strong Audi driver pairing in the 2015 season. Like last year, Team YACO Racing based in Plauen in Germany’s Vogtland region has awarded the cockpit of the Audi R8 LMS ultra to the former DTM driver Rahel Frey and her team-mate Philip Geipel. “We have the opportunity to benefit from the experiences we gathered last year,” says Frey, who brings another know-how advantage to the squad, as she is familiar with the new specification tires used in the GT Masters from other series. The aim for 2015: “Consistently clinching good results,” says Geipel. The season will open at Oschersleben on April 25/26.

The Audi R8 LMS saw its world debut at the same time as the production model in early March. This weekend it was driven in public for the first time, at the Nürburgring. Are you proud of the latest racing model of quattro GmbH?

Needless to say we were particularly pleased to see a new production sports car and the corresponding race car being simultaneously unveiled at Audi, and at as important an exhibition as the Geneva Motor Show at that. There were also many inquisitive looks and keen interest when we were on track with the new R8 LMS in the VLN Test and Set-up Session on the Nürburgring.

The public attention is a nice reward for what has been achieved so far. But there is something else that your squad is currently focused on – a huge workload.

Since the development began in 2013 we have already done a lot of valuable work, reeling off tens of thousands of test kilometers and many test bench runs. The first public run on the Nordschleife this weekend was important for our further preparation. We had previously been on the Nürburgring only once and the weather was bad at that time. We’ve now obtained further important findings for optimizing our a set-up. This should provide a good basis for the VLN Endurance Races on March 28 and April 25. With that, we should be among the first manufacturers to test their new models for 2016 in racing conditions.

What other tasks are on your agenda?

We’re aiming to have developed a fully matured car by the time of the Nürburgring 24 Hours on May 16 and 17 that fits the requirements of the Nordschleife well and will be competitive as soon as possible. In the intervening period there’s still an endurance test on our agenda as well. We’re going to contest further races during the course of the season. The resulting findings will – to the extent this may be necessary – be fed into the customer cars. We’re on the right track.