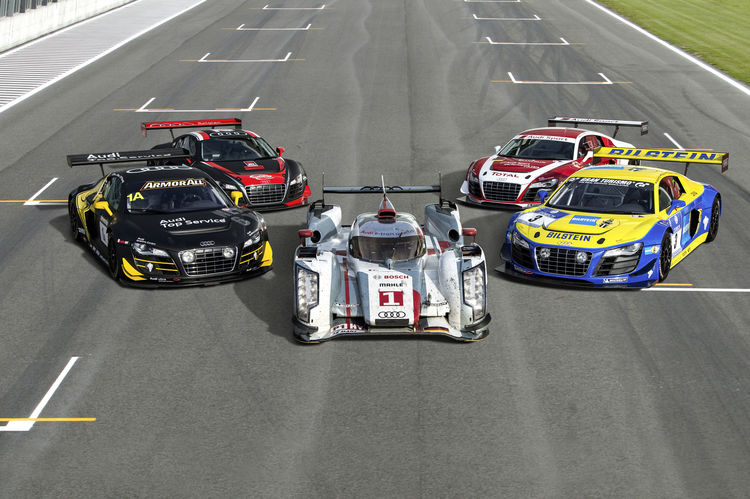 Audi unites its endurance race winning quintet. Five Audi race cars that from Bathurst to Le Mans won four 24-hour races plus a 12-hour race in the 2012 season came together for the first time at a photo shoot.

The class meeting of the 2012 endurance race winners saw the united innovation, powerful performance and maximum efficiency of five race cars from Ingolstadt and Neckarsulm. Combined, the four Audi R8 LMS cars and the Le Mans winning R18 e-tron quattro had gone almost halfway around the globe. In five racing commitments, at Bathurst (Australia), Le Mans (France), the Nürburgring (Germany), Zolder and Spa (both in Belgium), they covered an overall distance of 17,767.898 kilometers, which corresponds to around 44 percent of the circumference of the earth at the equator. Added to this are the successes achieved in the new FIA World Endurance Championship (WEC) with four more victories besides Le Mans, plus the drivers’ and manufacturers’ title wins.

At Audi, all endurance racing competitions are centered on technology – a combination of high speed and maximum efficiency. Audi has achieved this aim with two highly different race cars: The R18 e-tron quattro, with its innovative hybrid drive, competes in top-caliber racing. Its concept stands for four top-flight achievements:

The R18 e-tron quattro delivered 100 percent reliability, without a single retirement in the 2012 season.

The Audi R8 LMS demonstrates “Vorsprung durch Technik” as well. The ultra version launched in 2012 has become even lighter, faster and more efficient. In achieving these new levels, the GT3 race car profits from its solid genes. More than 50 percent of the car designed for customer racing is based on the Audi R8 production model.

The grand victories in 2012 endurance racing