Audi is hoping for third victory at Valencia 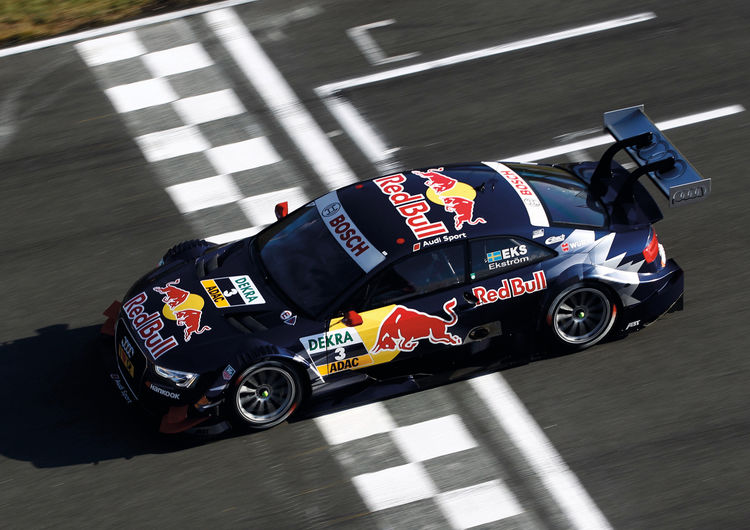 On the last September weekend, the DTM is returning to the venue that in previous years was firmly in Audi’s hands: at the Circuit de la Comunitat Valenciana Ricardo Tormo on the outskirts of the Spanish coastal city Valencia, the brand with the four rings has been unbeaten in the DTM thus far.

The DTM has visited the race track that is primarily known from the MotoGP racing series twice before. And both times, Audi had something to celebrate. Mattias Ekström won in 2010 and 2011 after having started from the pole position at both events. Last year, the brand even achieved a 1-2-3-4-5-6 result and thus an early title win by Martin Tomczyk.

This year, after the unfortunate race at Oschersleben, Audi no longer has any chance of winning the drivers’ championship. The battle for the manufacturers’ championship in which Audi is the runner-up with a deficit of only 29 points is still open though. A total of 202 points are yet to be awarded in the two remaining races at Valencia and Hockenheim.

Mike Rockenfeller is traveling to Valencia as the Audi driver with the highest points score. For his Spanish team-mate Miguel Molina, the race on the 4.005-kilometer track that is driven counter-clockwise is a home round.

For the Audi A5 DTM, the circuit is not new territory. Before the season started, several DTM tests were held at Valencia, which means that the three Audi teams have basic data they can build on. However, the further technical development has not come to a halt since then – not even in the short time span between the races at Oschersleben and Valencia.

Dr. Wolfgang Ullrich (Head of Audi Motorsport): “After the disappointing weekend at Oschersleben we’re looking ahead to the race at Valencia. This is a track with completely different characteristics than the circuit at Oschersleben. We’re hoping to be able to draw on a similar performance from our cars as we last did at Zandvoort. Our maxim is: hard work and full concentration on the race at Valencia.”

Hans-Jürgen Abt (Team Director Audi Sport Team Abt Sportsline): “We’ve got fond memories of Valencia where we clinched victories in both races of the past two years with Mattias Ekström. Since we’ve been lacking fortune in racing this year we’ve got to be careful about making predictions. But our aim is to prove that we’re capable of winning. We won’t give up until we’ve brought the first victory home.”

Ernst Moser (Team Director Audi Sport Team Phoenix): “Naturally, we’re looking forward to Valencia because that’s where we became champion last year. ‘Eki’ won there both times. If we can find the speed again that we had there we’ll be in contention again. We’ll try and do our homework as best we can.”

Arno Zensen (Team Director Audi Sport Team Rosberg): “I’ve got fond memories of Valencia as well. Last year, we finished in second place there with Filipe (Albuquerque). Maybe we can repeat that. In any event, we’ll be giving our maximum.

Filipe Albuquerque (27/P), TV Movie Audi A5 DTM #22 (Audi Sport Team Rosberg)
- Was the runner-up last year at Valencia
- Scored points six times this season
“I’ve got fond memories of Valencia and think the track should be suiting our A5 better than Oschersleben did. Last year, I took my first podium there. I haven’t managed to do that yet this year. I’m going to continue to fight for that.”

Mattias Ekström (34/S), Red Bull Audi A5 DTM #3 (Audi Sport Team Abt Sportsline)
- Has not been beaten in qualifying and the races at Valencia to date
- Scored his 600th point in the DTM at Oschersleben
“I’ve had two fantastic weekends at Valencia: pole twice and winning twice. A hat-trick this year would of course be a dream. But at the moment, we’re very very much rooted to the soil. That’s why it would simply be nice to have a solid weekend from the beginning through to the end.”

Rahel Frey (26/CH), E-POSTBRIEF Audi A5 DTM #17 (Audi Sport Team Abt)
- Took 14th place at Valencia last year
- Most recently showed strong performances particularly in qualifying
“Valencia will be a challenge for the Audi team that we enjoy taking up, and this also goes for me personally. I’m happy to be returning to Valencia. Last year, I drove a good race there. Unfortunately, I’ve now had two consecutive retirements, so I’ve got quite a bit to make up for at Valencia.”

Miguel Molina (23/E), Red Bull Audi A5 DTM #10 (Audi Sport Team Phoenix)
- Is the only one of the two Spaniards in the 2012 DTM with points to his tally
- Is contesting his 30th DTM race at Valencia
“Of course I’m particularly looking forward to Valencia. It’s my home round and that always gives me a lot of additional motivation. A large number of Spanish fans will be there to support me. We know that it’ll be another tough weekend. But at the last race at Oschersleben we made some progress in qualifying. I’m starting into my home race with a good feeling.”

Edoardo Mortara (25/I/F), Playboy Audi A5 DTM #21 (Audi Sport Team Rosberg)
- Experienced a difficult weekend last year at Valencia
- Has already won two DTM races this season
“After a difficult race at Oschersleben I’m hoping for things to go better again at Valencia and that we can score a good result. I’m pretty optimistic that this’ll be the case.”

Mike Rockenfeller (28/D), Schaeffler Audi A5 DTM #9 (Audi Sport Team Phoenix)
- Before the last two races is the Audi driver with the best points score
- Is tackling his 60th DTM race at Valencia
“I’m happy to be traveling to Valencia – especially after the weekend at Oschersleben. I’m hoping that the track will suit us better than Oschersleben – hopefully as well as Zandvoort did. I’m going to give everything again to clinch the best result for Audi. And obviously I’d love to be in contention for victory.”

Timo Scheider (33/D), AUTO TEST Audi A5 DTM #4 (Audi Sport Team Abt Sportsline)
- Clinched the pole position for Audi at Zandvoort
- Finished the races at Valencia in the top five each time so far
“Valencia was the weekend on which we clinched the title for Audi last year – so from that point of view we’ve got positive memories. But when comparing the character of the race tracks at Valencia and Oschersleben I do have a bit of respect for the race. Of course we want to do better than we did last weekend.”

Adrien Tambay (F/21), Audi ultra A5 DTM #18 (Audi Sport Team Abt)
- Scored his first DTM points at Zandvoort
- Knows the circuit at Valencia from tests in the Audi A5 DTM
“Oschersleben was disappointing for me because we were very unfortunate despite our good work and didn’t achieve the deserved result. At Valencia, I drove the Audi A5 DTM for the first time – I’ve got positive memories of that. Plus, the race is held in the south – I always like that.”

With a 1-2-3-4-5-6 result and an early title win Audi managed to crown the 2011 DTM season at Valencia. After starting from the pole position, Mattias Ekström celebrated his third victory of the season, Filipe Albuquerque behind him took his first podium finish, and Martin Tomczyk in third place the champion’s title. Tomczyk, after starting from position ten on the grid, managed a perfect recovery: right on the first lap, he was in sixth place and in third after his second stop.

Miguel Molina about Valencia: “For a driver, the main special aspect no doubt is the fact that we drive counter-clockwise. Most race tracks run in the opposite direction. Valencia has a few very fast turns – such as turn 1 and turn 8. The second and the last turn offer possibilities for overtaking. Another thing that makes Valencia special is that it’s usually very hot here. This affects the tires and the technology, and the drivers’ fitness is particularly important here. I personally like Valencia: it’s my DTM home round. All of my friends and a large number of fans are here and the atmosphere is really great. That’s a special motivation for me.”