Audi in front at Oschersleben as well 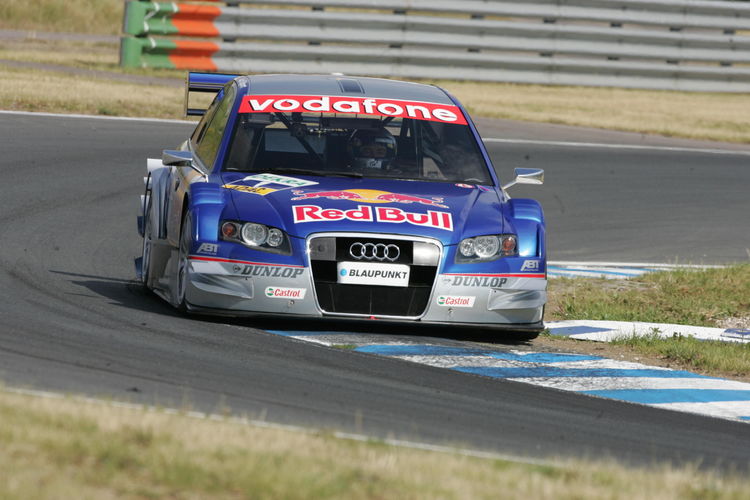 Last Sunday, the Audi R8 triumphed for the fifth time in the 24 Hours of Le Mans. Now, the Audi A4 DTM is hitting the headlines again: in extremely humid summer weather, the Audi drivers set the pace in both DTM tests at Oschersleben on Friday. In the first test in the morning, Martin Tomczyk was the quickest. In the afternoon, his team-mate from Audi Sport Team Abt Sportsline, Mattias Ekström, clocked the fastest time of the day. Tom Kristensen finished each of the sessions in second place. After his record win in Le Mans, the Dane has a particularly large crowd of fans surrounding him this weekend.

Like last year, the 2004-spec Audi A4 DTM cars, too, ‘feel very comfortable’ at the Motopark Oschersleben circuit, where they clinched a 1-2 victory in 2004. In the morning, Christian Abt clocked the third-best time. In the second session, Abt, at the wheel of the A4 DTM entered by Audi Sport Team Joest, was leading the field for a long time before losing a lot of time in the pits due to a leakage problem.

On Friday, the quickest 15 cars came within one second of each other. Because overtaking on the 3.667-kilometre circuit at Oschersleben near Magdeburg is considered extremely difficult, qualifying is particularly important. ARD will broadcast the fight for the best grid positions live on Saturday, starting at 2 p.m. (local time).

Mattias Ekström (Audi Sport Team Abt Sportsline #1)
4th place / 1st place, 1m 20.858s
Here at Oschersleben, a bit of rallying experience really comes in handy, because there’s so much gravel and dirt on the track. But at the end of the two test sessions, I reminded myself that I’m a racing driver and focused on set-ups for the Qualifying session and the race. I believe we’re well prepared for the weekend.”

Tom Kristensen (Audi Sport Team Abt #5)
2nd place / 2nd place, 1m 20.958s
“Firstly, I’d like to thank my engineer and my team. My Audi A4 was as perfect today as it was when we shut it off at Brno three weeks ago. Here at Oschersleben – because of the changing track conditions – every lap is different. To clock consistent times is a big challenge. Generally speaking, it’s been a good Friday.”

Martin Tomczyk (Audi Sport Team Abt Sportsline #2)
1st place / 9th place, 1m 21.446s
“This afternoon, we concentrated on a long-run which definitely proved to be satisfactory. In tomorrow’s Free Practice, we’re going to prepare a bit better yet for the Qualifying. At these ambient temperatures, the heat in the cockpit is enormous. But it’s even a lot more strenuous to achieve a good lap time because there’s always some sand on the track.”

Christian Abt (Audi Sport Team Joest Racing #14)
3rd place / 10th place, 1m 21.476s
“I’m very satisfied because we’re well prepared for qualifying. Tomorrow, we’re going to fine-tune the set-up a bit more. In the Warm-up on Sunday, we’re going to do some work for the race. My A4 feels super and it’s quick. The grid positions at Oschersleben are very important. It’s almost impossible to overtake even a car that’s a lot slower than you are.”

Allan McNish (Audi Sport Team Abt #6)
6th place / 11th place, 1m 21.582s
“This morning, we lost almost 40 minutes due to a few repairs. My A4’s balance is pretty good already, and my long run was okay as well. Nevertheless, we need to improve somewhat by tomorrow. I last drove here in 1998 and need to re-learn the track completely. At Oschersleben, it’s crucial to drive with extremely high precision and consistency.”

Pierre Kaffer (Audi Sport Team Joest Racing #15)
10th place / 12th place, 1m 21.662s
“I’m pretty satisfied with the way things went today. We kept up well with the pace, and I think that we can even top this tomorrow. We have used a new approach with the set-up, which proved to be quite good. We tried out a lot of different things with the car today and learned a few more lessons in the process. Yet again, the time gaps are incredibly small. But that’s the DTM: a super thrill for the spectators.”

Frank Stippler (Audi Sport Team Joest #19)
5th place / 16th place, 1m 22.075s
“I was a bit unfortunate in the second test: the rain started to get heavier when I went out for my opening lap with new tyres. That’s why didn’t clock my fastest time until the third lap. I hope things will be going better tomorrow.”

Rinaldo Capello (Audi Sport Team Joest #18)
17th place / 17th place, 1m 22.154s
“Today’s positions are not conclusive when it comes to judging how good the car is. Between the first and the second test, we significantly improved the car. With old tyres, I was very quick in the afternoon. With the first set of new tyres, I had no problems, but then I had to stop driving because of a problem with the power steering system.”

Ralf Jüttner (Technical Director Audi Sport Team Joest): “So far, things are looking quite good for us, even though Christian and ‘Dindo’ (Capello) lost some time while pitting. Still, we were able to complete our whole programme. I think we are actually stronger than the list of results shows. We tried out a lot of different things today. Some of them worked, others didn’t – but that’s what tests are for. Now we have to sort everything for tomorrow.”

Hans-Jürgen Abt (Team Director Audi Sport Team Abt Sportsline): “Our double victors at Brno have set the pace again today – that’s a nice start to the race weekend. Tom has obviously recovered very well from his triumph at Le Mans and looks like he’s just dying to perform another feat. We now want to try to repeat this strong team performance tomorrow afternoon when qualifying is on the agenda.”

Dr Wolfgang Ullrich (Head of Audi Motorsport): “We are satisfied with today’s result. Although the track was always very dirty after a few minutes due to the many cars sliding off the track, all of our drivers were able to work out a good set-up. As we’d expected, the field is very close here at Oschersleben. The spectators can look forward to a thrilling qualifying.”