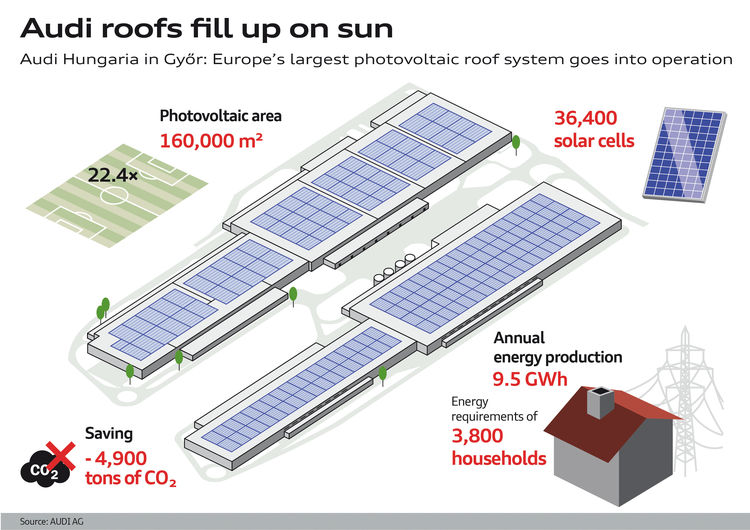 Today Audi Hungaria in cooperation with E.ON Hungaria officially started operation of Europe’s biggest photovoltaic roof installation. Since the start of the year, the site in Győr has used only green power. In 2012 Audi’s Hungarian plant opened a geothermal facility to supply most of its heat requirements. The remainder is compensated by bio-gas certificates. Audi Hungaria is thus the second of five Audi sites to achieve a neutral carbon balance.

“We have a clear aim: that all Audi sites will have carbon-neutral operation by 2025,” says Peter Kössler, board member for production at Audi and chairman of the supervisory commission of AUDI HUNGARIA Zrt. “By converting our factories to renewable energy, we are making an important contribution to counteracting climate change.”

After Audi Brussels, which was converted in 2018, the second of five Audi sites has now achieved this aim. All of the measures for reducing the ecological footprint at Audi sites, in production and in logistics are gathered together under Mission:Zero. The focus lies on the challenges that are key to Audi: decarbonization, water utilization, resource efficiency and biodiversity. Audi has already reached an important intermediate goal in the field of decarbonization: since the start of this year, all Audi plants have used only green power.

“Sustainability is essential for Audi Hungaria. The solar park makes a contribution to our attainment of a neutral carbon balance. It is of great importance to us to make our production more and more environmentally friendly and to reduce continuously the ecological footprint of our activities,” says Alfons Dintner, CEO of Audi Hungaria.

Audi is constantly reducing the energy requirement at its sites. In 2019 alone, Audi Hungaria saved more than 18,000 megawatt-hours of energy and avoided CO2 emissions amounting to almost 5,750 tonnes by means of numerous efficiency measures. In addition, the site at Győr in Hungary is engaged in decarbonization by means of three mechanisms. The first is the switch to green power, which has taken place thanks to the commissioning of Europe’s biggest photovoltaic roof installation and the supply of electricity from renewable sources. The facility, built in cooperation with E.ON Hungaria, has been installed on the roofs of the plant’s two logistics centers. This solar energy park, covering an area of approximately 160,000 square meters, consists of 36,400 solar cells and provides a maximum performance of twelve megawatts. Karten Wildberger, Member of the Boaord of Management, E.ON, says: “This project represents in many ways what’s needed to achieve carbon neutrality by 2050. To do so, we need to rebuild the energy systems in urban areas and in the industry towards CO2-neutral systems. I consider the project with our partner Audi to be an important step in our endeavor to create the sustainable energy world of tomorrow and hope that it will be followed by further projects of this kind.”

Carbon emissions that are currently unavoidable, for example those from the engine testing facilities, are compensated by Audi Hungaria through internationally recognized and certified carbon credits. This is the third mechanism, which accounts for about five percent of the carbon emissions.

Audi is continuously working to reduce the ecological footprint of its sites. The company is also engaged beyond the gates of its plants. Since 2017 Audi’s logistical rail transportation carried out with Deutsche Bahn has been largely carbon-neutral. Thanks to the changeover to the “DBeco plus” product of DB Cargo, the company has saved more than 13,000 tonnes of CO2 annually. Since 2010 the so-called “green train” has been on the rails between Ingolstadt and the North Sea loading port of Emden. Since 2012 “green trains” have also been in operation on the route from the Audi plant at Neckarsulm to Emden. Since 2019 Audi has also been compensating the routes between the factories in Ingolstadt, Győr and Brussels, the production site of the Audi e-tron.

Note to editors: Additional photos of the event will be uploaded later this day. Audi Communications will provide further insights from November 18-20, 2020 as part of an Audi TechTalk.