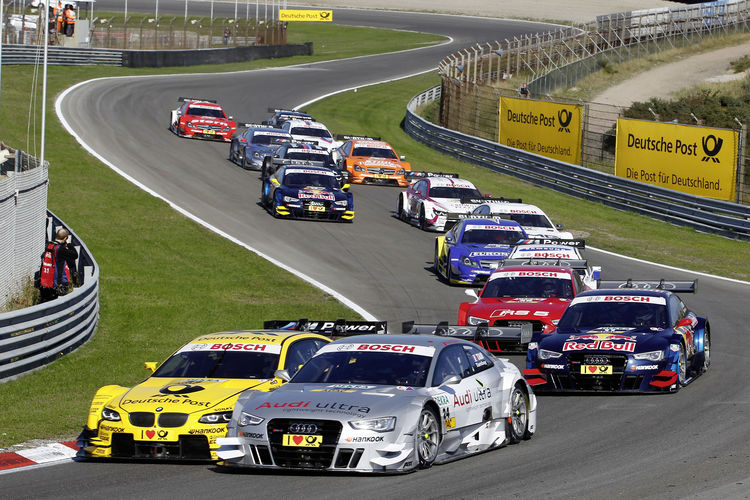 Even though Mike Rockenfeller has had the DTM title in his pocket ever since the race at Zandvoort the motivation of the Audi squad remains unbroken. In the finale at Hockenheim (October 18 to 20), the drivers are aiming to capture the title in the manufacturers’ and team standings as well. ARD will dedicate particularly long airtime to the showdown of the 2013 season.

DTM fans can expect a thrilling season finale at Hockenheim. Although Audi driver Mike Rockenfeller has secured the driver’s title early in the ninth round at Zandvoort the situation in the team and manufacturers’ classifications promises a gripping three-way battle. Audi Sport Team Phoenix is heading the standings by only a three-point advantage in front of the best BMW team and ten points in front of the best Mercedes squad. In the manufacturers’ standings, Audi has a 7-point advantage over BMW. Audi last managed to win all three titles on making its comeback with a factory-backed commitment in 2004.

For the Audi drivers, Hockenheim has traditionally been a good track. From the current line-up, Mattias Ekström, Jamie Green and Timo Scheider have achieved victories on this circuit. Since the DTM’s comeback in 2000, an Audi driver has been on the very top of the podium five times. This May, the two-time Champion Timo Scheider started the season at Hockenheim with a pole position. Newcomer Green has won the finale twice in his career.

The 4.574-kilometer Hockenheimring ranks among the favorite tracks of many DTM drivers. The reason, besides the unique atmosphere in the stadium-like Motodrome, is the characteristics of the track that is regarded as technically challenging due to its mix of fast turns and slow sections. The long Parabolica with the subsequent hairpin turn offers one of the best overtaking opportunities on the whole DTM calendar. The long straight is an optimum section for use of the Drag Reduction System (DRS) that allows the drivers to flatten the rear wing angle by pushing a button on the steering wheel. Furthermore, Hockenheim is the first track on which the teams and drivers have gathered previous experience with the option tires. The new, softer tire compound was first used in a race at the season opener in May.

To get fans watching the event on television in the mood for the finale with detailed information, ARD has extended its airtime. Although the race on Sunday only starts at 14:00 ‘Das Erste’ will start to air live coverage from Hockenheim at 13:15, featuring preview reports and interviews. Qualifying will be broadcast live on Saturday at 14:30 as usual.

Tickets for all DTM races of the 2013 season are available at www.audi-motorsport.com/dtm. In many countries of the world fans can watch qualifying and the race live on the DTM’s YouTube channel at www.youtube.com/dtmint.

Dieter Gass (Head of DTM): “Following the early title win with Mike Rockenfeller we’re traveling to the finale with high motivation. The event will still be about clinching the team and manufacturers’ Championship titles. In both classifications, we’ve put ourselves in a good position through strong team performances in the past races. I’m sure that we’ll be making a more solid showing than we did at the opening event about half a year ago.”

Hans-Jürgen Abt (Team Director Audi Sport Team Abt Sportsline): “Backed by a title, you obviously travel to the finale feeling basically relaxed. Still, our squad has got some high aims left at Hockenheim. We want to show what we’re capable of and close the season with a victory. Hockenheim has often been a good track for us in the past and our four drivers are more motivated than ever.”

Arno Zensen (Team Director Audi Sport Team Rosberg): “Audi has pocketed the driver’s title, so we can travel to Hockenheim a bit more relaxed. To close the season, we’d like to set another exclamation mark at our home race.”

Filipe Albuquerque (28/P), Audi Financial Services RS 5 DTM #6 (Audi Sport Team Rosberg)
• Scored points in the past two DTM races
•  Is competing for Audi Sport Team Rosberg in his third year
“I finished out of the points in the two previous Hockenheim races. I want to change that with high motivation. A podium success at my team’s home round would naturally be a nice way to close the season.”

Mattias Ekström (35/S), Red Bull Audi RS 5 DTM #11 (Audi Sport Team Abt Sportsline)
•  Has won the season opener at Hockenheim twice
•  With 17 victories under his belt is the most successful Audi DTM driver
“The finale at Hockenheim is a very special event for me every year – that applies this time as well. My aim is simple: I’d like to start from the pole position and win the race.”

Jamie Green (31/GB), Red Bull Audi RS 5 DTM #12 (Audi Sport Team Abt Sportsline)
•  Won the finale at Hockenheim in 2007 and 2011
•  Has been on podium at Hockenheim an amazing seven times
“Hockenheim, for me, is a bit like the home of motorsport in Germany. We all know the track very well because we always race here twice every year. I’ve won the finale twice in my career. It’s always a particularly nice feeling to cross the finish line and to see the big fireworks. I’d wish for that this year again.”

Miguel Molina (24/E), Audi RS 5 DTM #20 (Audi Sport Team Phoenix)
•  At Hockenheim, achieved his only podium result to date in the DTM
•  Last finished in the points three times in succession
“I finished the last three races in the top ten. We’d like to take this momentum with us to Hockenheim. For our squad, it’s about winning the team title.”

Edoardo Mortara (26/F/I), Playboy Audi RS 5 DTM #5 (Audi Sport Team Rosberg)
•  Clinched the only two victories for Audi in the 2012 season
•  Is competing for Audi Sport Team Rosberg in his third year
“Hockenheim is the last race of what has been a ruined season for me. We’re not going to leave anything undone to at least achieve a happy ending. I like the track but I’m wondering what the weather holds in store for us at the end of October. Hopefully, it won’t be very cold.”

Mike Rockenfeller (29/D), Schaeffler Audi RS 5 DTM #19 (Audi Sport Team Phoenix)
•  Has already been determined as 2013 DTM Champion
•  Is the only driver in the field to have scored points in all nine races
“I’m motivated, relaxed and look forward to a really great race weekend. I’d like to win the finale because that would be the crowning conclusion of this season. So we’re going to work just as hard and focused as we’ve been on nine other weekends this year.”

Timo Scheider (34/D), AUTO TEST Audi RS 5 DTM #23 (Audi Sport Team Abt)
•  Started from the pole position at the Hockenheim season opener
•  Was on podium at Zandvoort for the first time this season
“Knowing about the strong performance at Zandvoort and my pole position at the Hockenheim season opener I’m looking forward to the finale with really eager anticipation. We can all drive with a free spirit and are going to battle for the title in the manufacturers’ classification.”

Adrien Tambay (22/F), Audi ultra RS 5 DTM #24 (Audi Sport Team Abt)
•  Most recently finished in the points four times in succession
•  With 19 DTM races under his belt is the youngster in the Audi squad
“Even though Mike (Rockenfeller) has already secured the title we’re all going to battle hard for the last victory of the year. Hockenheim hasn’t been a track that’s treated me particularly well in the past because I’ve never finished a race there. This motivates me even more to show my abilities this time.”

All Hockenheim winners since 2000 (finale)

All Hockenheim winners since 2000 (opening round)

On the whole, the 2012 DTM finale did not go according to plan at all for Audi. The best Audi driver in the season’s final race was Edoardo Mortara, who, after starting from position eight on the grid, clinched sixth place and was the only Audi driver to score points. Despite a retirement Mike Rockenfeller finished the 2012 season as the best Audi driver in fourth place of the standings.

Mike Rockenfeller about Hockenheim: “The Hockenheimring is demanding and really good fun – and it’s something special because, subjectively, it seems to be the home of the DTM. At least that’s the way I feel about it. I feel very comfortable and particularly at home there although the Nürburgring is actually my home track. It’s also a good area in general with a really large number of motorsport and DTM fans. We always have full grandstands there, especially at the finale. Of course for us as drivers, the feeling at the finale is different than at the first race. At the finale, you know how the season went. After a bad season, you’re glad it’s over. After a good one, you’ve already got something to celebrate. And afterward, there’s always a good party. The most difficult place at Hockenheim, for me, is the hairpin turn. You arrive at very high speed and have to hit the brakes very hard. Theoretically, there are several lines because the track is so wide. But in the end, there’s just one fast line. And to hit it is something I personally find very difficult. I’ve got to specially focus on this every time.”