Skip to content
We are using cookies for a better user experience.
10/25/21
Neuburg a. d. Donau
Motorsport 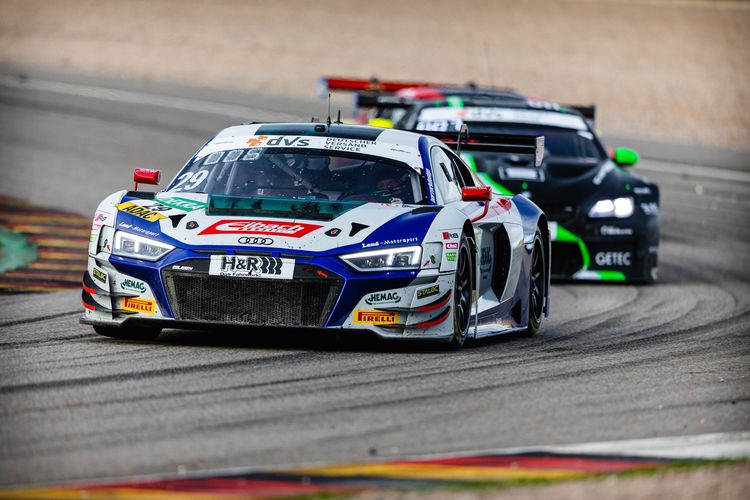 Christopher Mies and Ricardo Feller are keeping things exciting in the ADAC GT Masters. After their fifth podium finish this season, they go into the title decision at the finale in two weeks with a four-point advantage. Customer teams in China, France and New Zealand round off Audi Sport customer racing’s weekend record with their successes.

Title decision goes down to the wire: Audi Sport driver Christopher Mies and Ricardo Feller increased their lead at the top of the standings from two to four points on the penultimate race weekend of the ADAC GT Masters. The German and the Swiss had started Saturday’s race at Hockenheim in second place. In the Audi R8 LMS fielded by the Montaplast by Land-Motorsport team, they were beaten by only half a second after 35 laps. It was already their fifth podium finish this season. In Sunday’s race, the driver duo improved from eleventh on the grid to seventh position. After the sixth event of the popular race series, fans can thus look forward to a thrilling finale from November 5 to 7 at the Nürburgring: In addition to the Audi driver duo, no less than eleven other competitors have chances of winning the title. Drivers of the Audi R8 LMS have won the ADAC GT Masters title four times since 2009.

Two Audi victories at Zhuhai: The Audi R8 LMS was unbeatable at the second event of the China GT racing series. In the first one-hour race on the Zhuhai circuit, the FAW VW Audi Racing Team prevailed by a margin of 2.7 seconds. The winners Cheng Congfu and Anthony Liu had fought a close battle and exchanged positions with the driver duo Rio/David Pun in an Audi R8 LMS from Team X Works during the race. Third place also went to Audi: Billy Lo from Team Anstone Racing, driving solo, completed the podium at Zhuhai in another Audi R8 LMS. In the second race, Team X Works managed revenge: Rio made the better start from pole position. Together with teammate Pun, he built up an advantage of more than twelve seconds over Cheng Congfu and Anthony Liu over the course of 37 laps and crossed the finish line as the winner.

Two successes in China: Hu Bo was the benchmark in the Audi R8 LMS GT4 at the second round of the China GT. At Zhuhai, the Chinese shared the cockpit of the production-based sports car with his compatriot Chen Weian for the first time. The driver duo from Absolute Racing relegated their pursuers to second place in the first race with a one-lap advantage. In the second race, the two Audi drivers once again opened up a one-lap lead in the GT4 class. As a result, Hu Bo remains the leader of the standings in the Audi Sport Asia Trophy, a classification for the best privateer Audi drivers in the region. Anthony Liu is currently second.

Two trophies in China: Yang Xiaowei was the best of four privateer drivers in the Audi RS 3 LMS at the TCR China at Zhuzhou. The race series held a total of four individual sprints at a double-header event that was the third and fourth stop on the calendar. In both the first and the third race, the Team Z.Speed driver finished in third place. Ahead of the finale in Shanghai – another double-header from November 5 to 7 – Yang Xiaowei is second in the Am standings, just two points behind the leader.

Second place in New Zealand: On the third race weekend, the Track Tec Racing team recorded its best result of the season so far in the South Island Endurance Series on New Zealand’s South Island. Debbie Chapman managed second place in her class behind Hyundai driver Rhys Gould and in front of his brand colleague Scott O’Donnell in the Audi RS 3 LMS in the one-hour race at Teretonga on a wet track. Before the finale in November, Debbie Chapman is third in the standings in her class behind husband Dennis Chapman, who drives another Audi RS 3 LMS from Track Tec Racing.