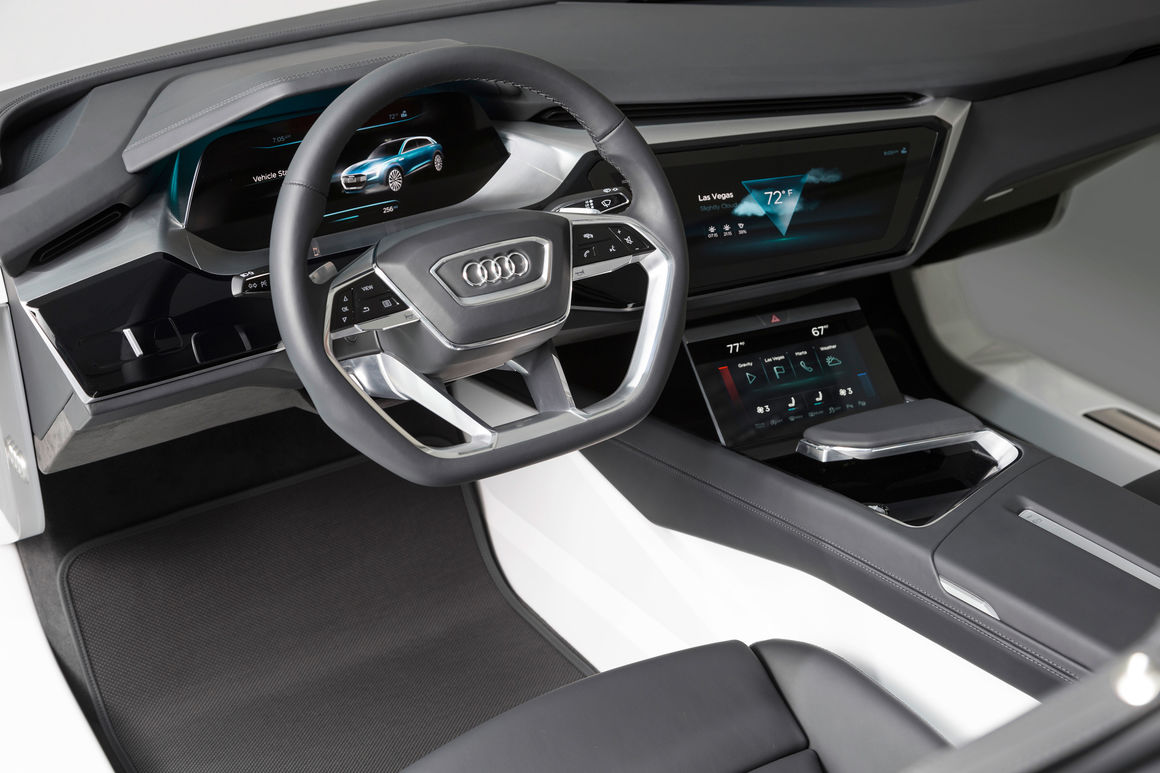 HMI – new display and operating concept
At the CES, Audi is demonstrating its display and operating concept of the future in an interior mock-up of the Audi e-tron quattro concept car. The brand with the four rings is showcasing its advanced development of the Audi virtual cockpit: the Audi virtual dashboard. In the future, all Audi displays will be designed in OLED technology, and they will harmoniously blend into the interior.

Positioned in the driver’s direct visual field is the new curved OLED of the Audi virtual cockpit with a 14.1-inch screen diagonal and a resolution of 2,240 x 720 pixels. The AMOLED (AMOLED = Active Matrix Organic Light Emitting Diodes) technology that is used offers tremendous freedom in shaping the display.

In addition to the Audi virtual cockpit which – in conjunction with the multifunction steering wheel – presents all key information with safe and reliable operation, the Audi MMI in the center console offers an outlook on the digital future with its two large touch displays. The upper screen shows classic infotainment content for operating navigation and media functions, while the lower screen is used to input handwritten text and operate the automatic air conditioning system. In addition, on the multifunctional display, individual favorites can be configured whose functions can later be called up quickly.

All key functions are integrated into these two displays. This makes it easy to personalize contents and update and extend functions at a later time. The fully digital implementation of the Audi operating concept creates the foundation for a system that can be adapted to the use patterns of individual customers. It is increasingly becoming a personal assistant in the car with its intelligent messages and personalized content.

New touchscreen technology
The new type of MMI operation with “MMI touch response” recognizes familiar touch gestures used in consumer electronics, and it adapts them to the special operating environment inside the car. The system gives the driver feedback that can be clearly felt on the finger when scrolling through lists or adjusting the air conditioning system, for example. A gentle press on the display activates selection and activation of a touch control. This avoids inadvertent operating errors. The principle of haptic feedback makes the new Audi touchscreens ideal for vehicles; they are easy, ergonomic and safe to operate. The wrist sits comfortably on the wide gear selector handle without any vibration.

Seamless connect experience
In the future, the entire system will learn about individual customers, their habits and preferences, and actively assist them. For instance, the navigation system might recommend that the driver start out early if traffic is beginning to build up, so that the desired destination can be reached on time. During the drive, the latest supplemental information – such as traffic and hazard messages – is shown on the 3D map that is shown in the driver’s visual field. For the electrically powered Audi e-tron models, information on surroundings can also be displayed as well as the locations of nearby charging stations, for example. In the future, the HERE database will be supplying this information.

Customers will also have new ways of always keeping their cars up-to-date. In the future, they will be able to use their personal myAudi account to extend functionalities or acquire them after car purchase.

MIB2+
The second generation of the modular infotainment platform (MIB) is currently being used in the new production models from Audi. The Audi e-tron quattro concept already integrates the next development stage, the MIB2+, which is necessary for new infotainment functions. It offers more computing power to support multiple high-resolution displays. On-board and online information also merges into the system. This makes the car even more a part of the cloud. Full integration of the cellular phone network plays a decisive role, for instance. It enables early use of the latest standard: LTE Advanced.

LTE Advanced
The brand with the four rings has been a front-runner for many years in the area of automotive mobile communications. Now, with MIB2+, Audi is the world’s first automaker to support the latest standard: LTE Advanced (LTE = Long Term Evolution). As a result, MIB2+ enables maximum transmission rates of 300 MBit/s for download and 50 Mbit/s for upload, so it is around three times faster than the previous MIB2. Extension of the cellular phone network has already begun in many countries.

Another great strength of the MIB2+ is mobile telephony by the VoLTE (Voice over LTE) method – here data packets are transported via the IP protocol. This new technology improves voice quality, accelerates phone connections and enables simultaneous use of voice telephony and high-speed data transmission.

Online voice control
Audi is also entering a new dimension in voice control, which is also known as the SDS (speech dialog system). MIB2+ offers a hybrid solution that incorporates both on-board and online responses.

In online recognition, the driver’s speech input is sent as a data packet to voice recognition software in the cloud over the cellular phone network. If the on-board and the online recognition systems both provide a response, the dialog manager reconciles them. In choosing the more plausible variant, it uses such criteria as the car’s location and previous user inquiries.

This new hybrid solution from Audi, which can accept many different natural language expressions, extends voice control capabilities substantially. Along with point of interest (POI) searches, it also includes functions for weather, news and online radio.