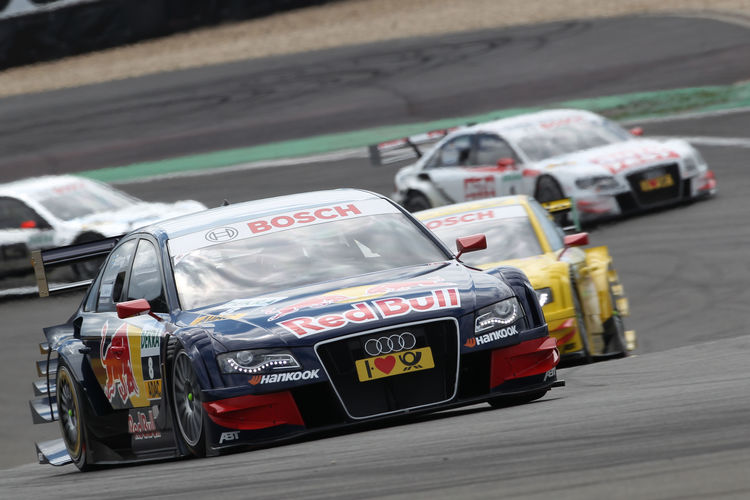 In the duel against Mercedes-Benz Audi has raised the score of victories to 4-2. In front of 86,500 spectators (throughout the weekend) Mattias Ekström in the Audi A4 DTM of Audi Sport Team Abt Sportsline was in a class of his own at the Nürburgring. From the pole position the Swede achieved an advantage of 5.533 seconds over the leader of the standings, Bruno Spengler, and celebrated his 15th DTM victory that was never at risk in the race.

Exactly 63 weeks or 441 days Mattias Ekström had to wait for this day. The last DTM race won by the Audi driver had been at Valencia at the end of May 2010. “That was a very long time,” said the Swede after his triumph at the Nürburgring. “This success feels incredibly good. I’m very happy for the team that suffered a great deal of misfortune in the first half of the season. This weekend Audi Sport and Abt were right on the mark. All I had to do was drive ...”

Almost up to the end of the race Audi Sport Team Abt Sportsline was even heading for a one-two result at the Nürburgring. Up to the penultimate lap Mike Rockenfeller was running in second place before, under pressure from Bruno Spengler, the wheels of his Audi A4 DTM locked as he was braking into turn one. “I was having problems with grip on the rear wheels and changed the brake balance,” explained Rockenfeller. “But that’s not meant to be an excuse. I’m sorry for the team – something like this simply mustn’t happen on the penultimate lap.”

Places four and five went to Timo Scheider and Martin Tomczyk (Audi Sport Team Phoenix) who switched positions in a fierce duel on the 20th lap. The runner-up in the standings, Tomczyk, had started well from position seven on the grid but was hit by Mercedes driver Jamie Green in the commotion on lap one. The front end of his Audi A4 DTM was damaged in the incident. Tomczyk nonetheless managed to secure fifth place and as the best driver of a year-old car scored important points in the title fight. Before the remaining four races the German as the best Audi driver remains within a striking distance to Bruno Spengler, ranking seven points behind him in the overall classification.

With Edoardo Mortara on position seven a fifth Audi driver scored points. Audi Sport Team Rosberg had to repair the Italian’s A4 DTM after an incident in the morning’s warm-up session when a kerb along the track had come loose and caused considerable damage to the left-hand side of the vehicle. The two points which Mortara clinched as the best DTM rookie in the field were a nice reward for the extra work.

Mortara’s team-mate Filipe Albuquerque in ninth place just barely missed scoring a point. Oliver Jarvis managed to recover from position 15 on the grid to tenth place. Miguel Molina and Rahel Frey occupied places twelve and 16 in the race that was very turbulent at times.

“Overall, it was a great team performance,” said Head of Audi Motorsport Dr. Wolfgang Ullrich. “Mattias Ekström and his A4 DTM were in a league of their own this weekend. And Team Abt showed perfect pit stops. It’s a shame that Martin Tomczyk lost a few points. But we’re happy that after the body contact with Jamie Green on lap one he was able to even finish the race.”