Skip to content
We are using cookies for a better user experience.
08/20/18
Neuburg a. d. Donau
Motorsport 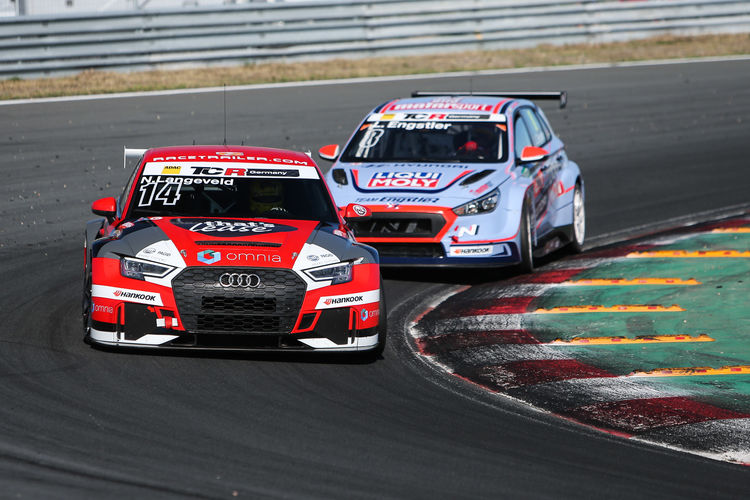 From hunter to hunted: Two rounds before the end of the ADAC TCR Germany season, Niels Langeveld managed the turnaround. The Dutchman in an Audi RS 3 LMS took the lead of the standings in his home round at Zandvoort.

Lead of the standings clinched: In his home round at Zandvoort, Niels Langeveld from Team Racing One achieved a decisive step in the ADAC TCR Germany: The 30-year-old Dutchman in an Audi RS 3 LMS took the top spot in the standings. From pole position in race one on the fifth race weekend he scored an impeccable lights-to-flag victory, which meant his second race win this season. He was trailed in second position by the Finn Antti Buri in an Audi RS 3 LMS of Team LMS Racing. In race two, Langeveld, in position three, clinched another trophy, giving him a nine-point advantage as the new leader of the standings with two events yet to be held.

First victory this season for Kenton Koch/Tom O’Gorman: While the Audi RS 3 LMS remained unbeaten in round eight of the IMSA Continental Tire SportsCar Challenge in the TCR class, the podium ceremony at Virginia International Raceway saw a change, with Team eEuroparts.com Racing having won a race for the first time. In the two-hour race, Kenton Koch/Tom O’Gorman achieved a one-lap advantage over Rodrigo Sales/Kuno Wittmer from Compass Racing. Behind them, their teammates, Britt Casey jr/Tom Long, completed a clean sweep of the podium by an Audi Sport customer racing trio. Two races before the end, Sales/Wittmer are leading the standings with just a four-point advantage over Casey jr/Long.

Another victory: Václav Nimč jr. in an Audi RS 3 LMS clinched his next two trophies in the FIA CEZ. At the Slovakiaring, the Czech from Team Krenek Motorsport in the first sprint took second place in his class. In race two, he prevailed in a photo finish with a 0.215-second advantage which earned him his second win this season, as a result of which he is ranked in second position of the standings in the Eset V4 Cup classification.

Two successes at the Nürburgring: The Audi RS 3 LMS achieved two class victories in round five of the VLN Endurance Championship Nürburgring. Team Møller Bil Motorsport from Norway won the strong nine-entrant field of the TCR class with Atle Gulbrandsen/Anders Lindstad/Kenneth Østvold/Håkon Schjærin after six hours with a one-lap advantage. Team Bonk Motorsport had competed with its Audi RS 3 LMS in the SP3T class. Hermann Bock/Michael Bonk won their classification with a two-lap advantage.

Second place at Assen: Jean-Karl Vernay in an Audi RS 3 LMS clinched his next trophy in the TCR Europe on the fifth race weekend in the Netherlands. In race one at Assen, the Frenchman from the Leopard Lukoil Team fought a thrilling battle with subsequent winner Dániel Nagy and after 14 laps, had to admit defeat by 2.3 seconds. For Vernay, following a victory and a second place, this marked the third trophy in this racing series.

Third place at Karlskoga: In the TCR Scandinavia, Tobias Brink in an Audi RS 3 LMS achieved his next podium result. The Swede with Team Brink Motorsport in race one on the fourth race weekend advanced from eighth on the grid to position three.

Unbeaten in Sweden: Jan Brunstedt continued his winning streak in the GT Sweden on the third race weekend. After the seasoned driver had previously been unbeaten at Anderstorp, he won both races in the Audi R8 LMS ultra at Karlskoga as well. In spite of not having been on the grid in the season opener, the Audi privateer driver is now leading the standings with a 28-point advantage.

One-two-three result in Australia: The customer teams of Audi Sport customer racing shaped the first race on the third race weekend of the GT-1 Australia club sport series. Rio Nugara from Team EAT Furniture won the event at Wakefield ahead of Rod Salmon from Team Oneworld Superyacht Charters and Matt Stoupas from KFC Motorsport. All three relied on an Audi R8 LMS ultra.

Two podium places in the Dunes: On the fifth race weekend of the ADAC GT Masters, Audi customer team Montaplast by Land-Motorsport clinched two podium places at Zandvoort. Brothers Kelvin and Sheldon van der Linde, on finishing race one in position two, equalized their best result this season to date – second place in the season opener at Oschersleben. They missed victory in the Netherlands by just 0.7 seconds, trailed by their teammates, Jake Dennis/Christopher Mies. For Mies, the 2016 Champion, it was the best result to date this season in the series for super sportscars.