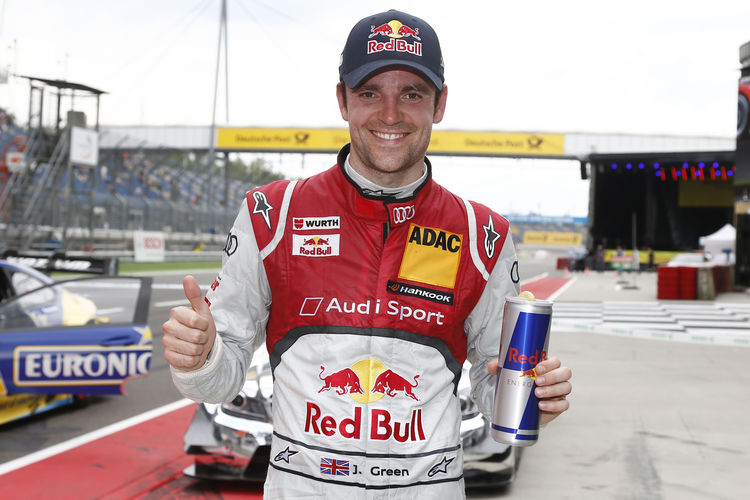 Audi newcomer Jamie Green gave himself a gift a day after his 31st birthday. The Briton from Audi Sport Team Abt Sportsline in qualifying for the DTM race at the Lausitzring (Sunday starting at 13:15, local time, live on “Das Erste”) took third place as the best Audi driver.

Green in his Red Bull Audi RS 5 DTM showed a remarkable performance right in the morning, driving the fastest lap in free practice. In the afternoon, he managed to battle his way into the crucial qualifying segment for the first time since switching to Audi and secured position three on the grid with a strong lap in Q4. “The first three races with Audi weren’t optimal for me,” said Green. “I had to get used to the car and the team first. But now I’m back. This morning, I was the quickest and now in qualifying the fastest Audi driver.  I’m happy and hoping to finish on the podium tomorrow. Mercedes was very strong today but they were very strong here last year as well.”

Mortara’s team-mate Filipe Albuquerque (Audi Financial Services RS 5 DTM) achieved the thirteenth-fastest time but is moving up to position twelve because BMW driver Augusto Farfus received a five-position grid penalty due to a violation in free practice. Miguel Molina (Audi RS 5 DTM) was struck by major misfortune: The Spaniard achieved the ninth-best time in Q1 but due to a technical problem on the driveline was unable to participate in Q2 and will therefore start from position 16.

“Today, we’ve seen how quickly the tables can turn,” commented Dieter Gass, Head of DTM at Audi Sport. “BMW most recently was regarded as dominant and suddenly Mercedes is very strong here – especially in sector one. We’re not unhappy with four RS 5 DTM cars in the top eight, although the gap to the front runners is unusually large considering what the gaps typically are in the DTM. I’m hoping for this to change tomorrow. It’s nice that the showing by our ‘birthday child’ Jamie Green was on the mark for the first time today with respect to what we expected of him. And Mike Rockenfeller, our driver with the highest points score, has got a decent starting base with position six on the grid as well.”

Fans around the world can watch the fourth DTM race of the year live on the DTM’s new YouTube channel at www.youtube.com/dtmint. 39 TV channels in total air live DTM coverage in 141 countries. In Germany, ARD will start to broadcast live from the Lausitzring on “Das Erste” at 13:15.