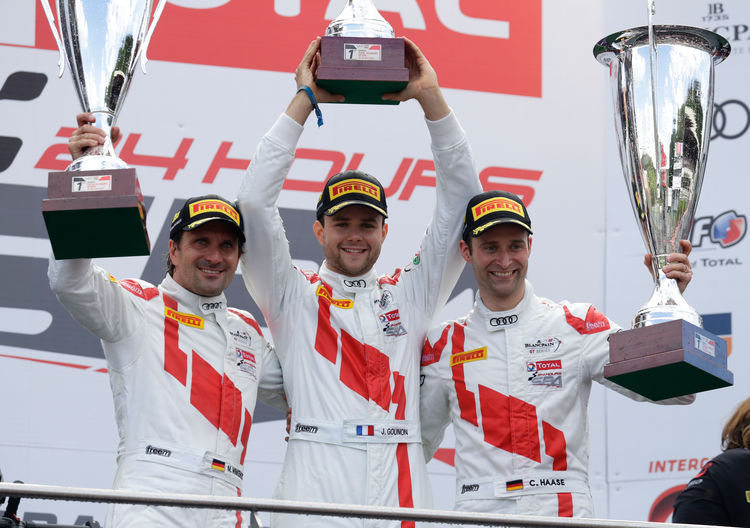 In one of the most thrilling editions of the 24 Hours of Spa, Audi has clinched its fourth victory in the world’s biggest GT3 endurance race. After 3,824 kilometers, Jules Gounon/Christopher Haase/Markus Winkelhock had a winning advantage of 11.862 seconds. In a very balanced competition, four marques were battling for victory up until the end and ultimately claimed the top four positions.

Audi Sport Team Saintéloc in its first factory-backed commitment with Audi Sport customer racing shone with a convincing performance. In the world’s toughest GT3 race, the number 25 Audi R8 LMS ran impeccably, its drivers having stayed clear of all trouble and ending the race without any sporting penalties. In the penultimate hour of the race, Christopher Haase chased leader Raffaele Marciello over several laps until the Italian pitted. Following his own final service and the stops of his rivals, the 29-year-old Audi Sport campaigner took the lead and went on to celebrate his first victory at Spa. For Jules Gounon from the South of France, this success marked the first one he has clinched in this race and together with Audi as well. Markus Winkelhock had previously won the iconic event in the Ardennes with Audi in 2014. In addition, this was the second 24-hour race victory claimed by the 37-year-old professional race driver this season following his success at the Nürburgring in May. Sébastien Chetail, who formed Saintéloc Racing in 2004, and his squad celebrated the first-ever 24-hour success in their team’s history.

“Sincere congratulations to the victorious drivers and the team on this outstanding performance,” said Chris Reinke, Head of Audi Sport customer racing. “This was a particularly tough edition of the 24 Hours of Spa because, due to a very good balance of performance, the Stéphane Ratel organization and Claude Surmont managed to create a field that has been as level as hardly ever before. This was hard work for all the teams because no-one dominated this race. What we saw this weekend was perfect advertising for GT3 racing.”

Pre-race favorites included two other teams relying on the Audi R8 LMS. Audi Sport Team WRT was leading on home soil with three different driver squads during the race. After three hours, car number 5 with Marcel Fässler/André Lotterer/Dries Vanthoor was the front runner, but on Saturday night a damaged brake pad forced the squad to make an unscheduled pit stop. From position 45, the trio battled its way back to eleventh. After nine hours, car number 2 with Christopher Mies/Connor De Phillippi/Frédéric Vervisch was running in front. However, time lost during a pit stop and an unfortunate on-track positioning when the safety car was deployed caused the driver trio to lose ground, ultimately clinching fifth place. They were trailed by Antonio García/Nico Müller/René Rast in the number 1 sister car. Although having run at the front some of the time as well, two sporting penalties cost the three pros a valuable time.

In the end, even a fourth Audi R8 LMS was among the top ten. Audi Sport Team I.S.R. from Prague with Pierre Kaffer/Kelvin van der Linde/Frank Stippler achieved ninth place. Three privateer drivers in another Audi R8 LMS from Saintéloc Racing – Fred Bouvy/Christian Kelders/Marc Rostan – saw the checkered flag in fourth place of the AM classification and position 27 overall.